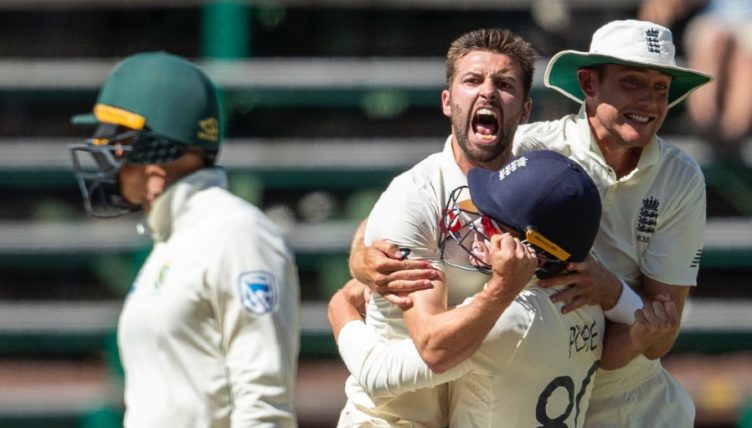 Mark Wood was the star performer for England again as the touring side won the fourth Test at the Wanderes by 191 runs to seal a 3-1 series victory over South Africa.

Dean Elgar and Pieter Malan negotiated the first hour without any issues, with the pitch offering little assistance to England’s opening bowlers.

But Chris Woakes – who bowled very well in the first innings – made the breakthrough soon after coming into the attack, as Malan played a loose cover drive and edged to Ben Stokes who took the catch at second slip.

Woakes then thought he had Rassie van der Dussen as he was given out lbw, before the South African reviewed the decision and was reprieved as the ball was shown to be going over the stumps.

It looked like the hosts would get through to Lunch with just one wicket down, until Joe Root threw the ball to Ben Stokes.

And is so often the case, Stokes provided the extra impetus England needed as he hurried Dean Elgar with a vicious short ball which the opener was only able to dolly back to Stokes.

South Africa then dominated the majority of the second session.

And Faf du Plessis provided typically staunch resistance at the other end before Stokes again made the crucial breakthrough, as the South African captain played on trying to defend a ball that kept low for 35 from 92 balls.

One brought two as Van der Dussen fell two short of what would have been a brilliant maiden ton, not quite getting to the pitch of a full ball from Mark Wood, chipping the ball to Stuart Broad, who took a fine diving catch at short cover.

Broad then got into the action with ball in hand, producing an absolute jaffer to have Temba Bavuma caught behind off his gloves as the ball reared wickedly off a pitch that was now showing more consistent signs of variable bounce.

“What a nut,” cries Pommie Mbangwa, as Broad dismisses Bavuma with an absolute jaffa that brushes the glove 🍊

And Broad picked up his second wicket of the Test match shortly after, as Dwaine Pretorious attempted to hook another short ball and was caught by Wood, running in from long leg.

That brought Vernon Philander to the crease for the last time in Test cricket after a truly wonderful career.

He timed a couple sweetly to the boundary but was dismissed for 10 as he gloved the ball behind trying to pull a short length ball from Wood.

Vernon Philander gloves down the legside off Mark Wood and the Wanderers stands to applaud as he leaves the field for the last time in Test cricket. SA 260-7. 👏

The Durham fast bowler then took his third wicket of the innings as a typically enterprising Quentin de Kock innings came to an end with a typically brainless Quentin de Kock shot, as he top edged a pull stroke and was caught at mid-off by Chris Woakes for 39.

Beuran Hendricks was run out soon after amid utter confusion with Anrich Nortje, to leave them nine down.

And it was Wood who finished off the South Africans as Anrich Nortje was caught down the legside – Wood’s fourth of the second innings and ninth in the Test match.

An impressive comeback from England, who have dominated South Africa in the last three Test matches, after the disappointment of that first Test loss.