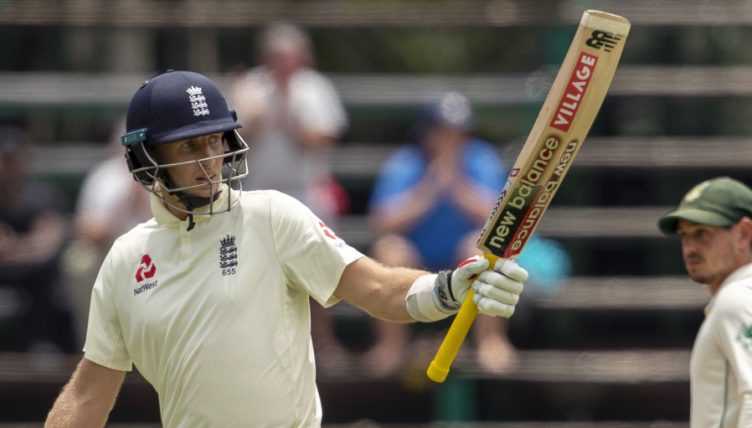 Captain Root had the rare opportunity to enforce the follow-on for the second match in a row after the hosts were dismissed 217 behind on 183 but opted to hand his seamers a well-earned rest and pile up scoreboard pressure at the Wanderers.

He led the way personally, top-scoring with 58 as his side made 248 all out at a rate of more than four-an-over in their second innings to lay the groundwork for a huge victory at South Africa’s ‘Bullring’.

That would seal a 3-1 success following the celebrations in Cape Town and Port Elizabeth and, with six full sessions to go on a ground where the record chase stands at 310, any other result seems inconceivable.

Mark Wood will again be expected to play a big part with the ball, having returned figures of five for 46 in the morning session.

South Africa had ended day two already in turmoil, 312 adrift on 88 for six, a position that only got worse when when they lost another batsman to the fifth ball of the day.

Chris Woakes was the bowler, drawing a leading edge from Vernon Philander who was at the start of a deeply disappointing day.

Playing the final Test of a distinguished career, he would later be fined 15 per cent of his last match fee for using abusive language in his day two send-off of Jos Buttler and then managed only nine wicketless balls in the second innings before limping off with a hamstring strain.

South Africa were in danger of folding embarrassingly, only for Quinton De Kock and Dwaine Pretorius to add some long-awaited steel with a partnership of 79.

De Kock turned his existing 32 into a fourth half-century of the series and Pretorius took advantage of some attacking fields to drive his way to a new personal best of 37.

It took Ben Stokes to break things up, Pretorius feeding a rising delivery to Zak Crawley at gully, before Wood wrapped things up.

De Kock had 76 when he was beaten on the drive, Wood shattering one of the bails after finding some deviation off the pitch to compliment his outright pace.

Mark Wood bowls De Kock for 76 with a blistering delivery that breaks the bail! South Africa nine down…

If Wood was too much for De Kock then number 11 Dane Paterson had no chance, stepping away to leg and nicking behind to give the Durham quick his second five-for in Tests.

Root had the lunch break to ponder his options but was never likely to put the burden straight back on his bowling unit and instead asked Crawley and Dom Sibley to strap on the pads.

The rookie pairing once again played their part at the top of the order, adding 56 for the first wicket and putting 20 overs into an attack lacking the ailing Philander.

Sibley looked a likelier target after benefiting from several thick edges to third man, but it was Crawley who fell first, nicking Pretorius.

Joe Denly came and went for eight, diverting Paterson into his stumps via deflections off bat and pad.

England’s lead was big enough to sweep aside that minor setback, but Denly’s personal aspirations may be hampered as his Test average dipped to exactly 30

Sibley matched his first-innings score of 44 before exiting in familiar circumstances after tea, shuffling across to left-armer Beuran Hendricks and nudging to short midwicket.

He stomped off angrily, replaced by Stokes to a chorus of boos following his angry exchange with a fan on day one.

Stokes’ arrival signalled a tonal shift and the game began to progress rapidly as soon as he unleashed six boundaries in a 24-ball stay.

Things only threatened to escalate until he drove away from his body and steered Hendricks to slip.

Root seemed largely immune to the frenzy but Sam Curran joined in, sprinting to 35 before hooking Hendricks to fine-leg.

Root completed his second fifty of the match, and 48th overall, before he was last man out – Faf Du Plessis taking a staggering one-handed catch to hand Hendricks a five-for on debut.