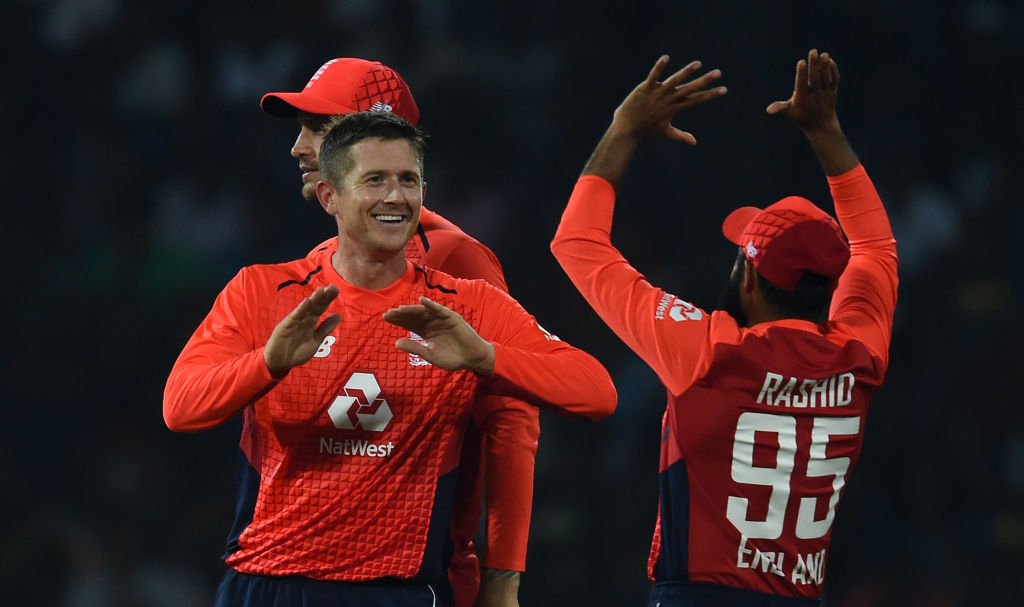 England bounced back from defeat in the final ODI against Sri Lanka to win the one off T20 International match by 30 runs after wickets from Adil Rashid and Joe Denly ripped the heart out of the Sri Lankan chase.

England were put into bat and got off to a rollicking start thanks to Jason Roy who looked to get after the Sri Lankan bowling from the very start of his innings. He got off the mark with a six and tried to dominate as much as he could. In doing so he rode his luck, getting dropped on 34, 41 and 53 before he was out under-edging a ball through to the keeper off the bowling of Lakshan Sandakan to depart for 69 (36).

While Roy was playing his helter-skelter innings at one end wickets were regularly falling at the other. The England run rate was over 10-an-over but that came at a cost. The first man to go was Jos Buttler who miscued a ball from Amila Aponso to cover for 13 (7). Three balls later Alex Hales was dismissed lbw to a ball that replays showed was missing leg stump, however England opted against reviewing.

Roy’s madcap efforts weren’t restricted to just his own end of the pitch, he also managed to engage in a mix up that saw his captain, Eoin Morgan, run out for 11 to leave England 60/3 in the seventh over.

When Roy fell it was left to Ben Stokes and Moeen Ali to get England up to a competitive total with Stokes playing the anchor role. Stokes never really got going but his 26 (27) at least meant that there was one end where wickets were not falling. It was left to Moeen to go for the big shots and his 27 (11) was what got England going again after a rain delay.

Joe Denly, returning to the England T20 side after an eight-year hiatus, struggled at first with Lasith Malinga bowling four dot balls in a row to him, but he eventually found a way to score making 20 (17) as England reached 187/8 off their 20 overs.

When Sri Lanka got their chase underway it was Denly that was in the centre of the action once again, opening the bowling with his leg breaks. It was a move that came as a surprise, but it worked with Denly claiming two early wickets.

Sri Lanka’s ODI captain, Dinesh Chandimal, helped take his side from 16/2 to 49/3 before he hit a reverse sweep into the hands of Hales at backward point for 26 (20) off Adil Rashid.

The efforts of Denly and Rashid, combined with some well-placed yorkers from Chris Jordan mean that the Sri Lankans never got on top of the required rate. By the time 14 overs had been bowled the asking rate was up to 15-an-over. Some big hitting from Thisara Perera off Liam Plunkett gave the home side some hope before Dasun Shanaka (10) was dismissed at the end of that over put England back in front.

When Jordan claimed two wickets in three balls in the 16th over it was left to Perera to play a lone hand. He managed to top-score with 57 off 31 balls, but without support at the other end England emerged as comfortable victors. Denly returned for the 20th over of the innings to claim two further wickets to finish with 4/19 – the best T20I figures for England against Sri Lanka.