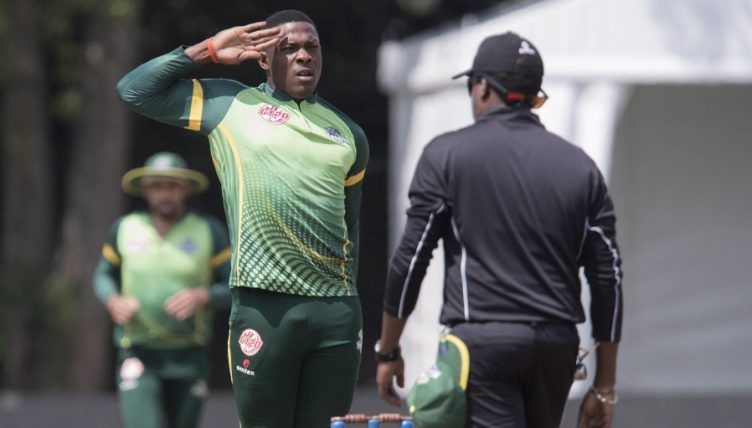 The celebration, which has been termed “funny” and “yeah, I like that, cheers” by someone in Shrewsbury it was forwarded to on WhatsApp, will be shown on the big screen any time a wicket falls during the new competition. Cottrell’s military-based antics will also be set to music after initial trials at Loughborough found the tempo of his three wacky marching strides correlates exactly to the “Dum, Dum, Dum” bit of Sweet Caroline.

👉 Sheldon Cottrell – we salute you!

Check out the paceman's military celebration, complete with march and salute, as he picks up career-best ODI figures of 5-46! https://t.co/K7bC3uXN3t

Having decided he would undo a second button on his shirt, an excited Harrison addressed the media to explain the vision behind the optics or vice versa.

“Remember that kid who ate a watermelon at the Big Bash? The one that went viral? Well our research – yes, same firm, they’re on a two-year retainer – indicates only 15% of men and 0.3% of women in Australia had heard of cricket before that. So clearly we need the same sort of catchy content for our own target crease interface demographic moving forward.”

The plan inevitably brought criticism from those both inside and outside the game, with supporters groups claiming the idea “may alienate existing fans of traditional irritating celebrations such as Imran Tahir’s”. Likewise former England bowler Harry Gurney took to social media to note that Cottrell’s elaborate routine, which seems to last an extra few seconds with every viewing, would take far too long for busy club cricketers to replicate at the weekends.

Some opponents of The Hundred surprisingly welcomed the idea, however, with one county fan admitting he was all for the meme’s use as “between you and me I’d nearly run out of things to complain about.”