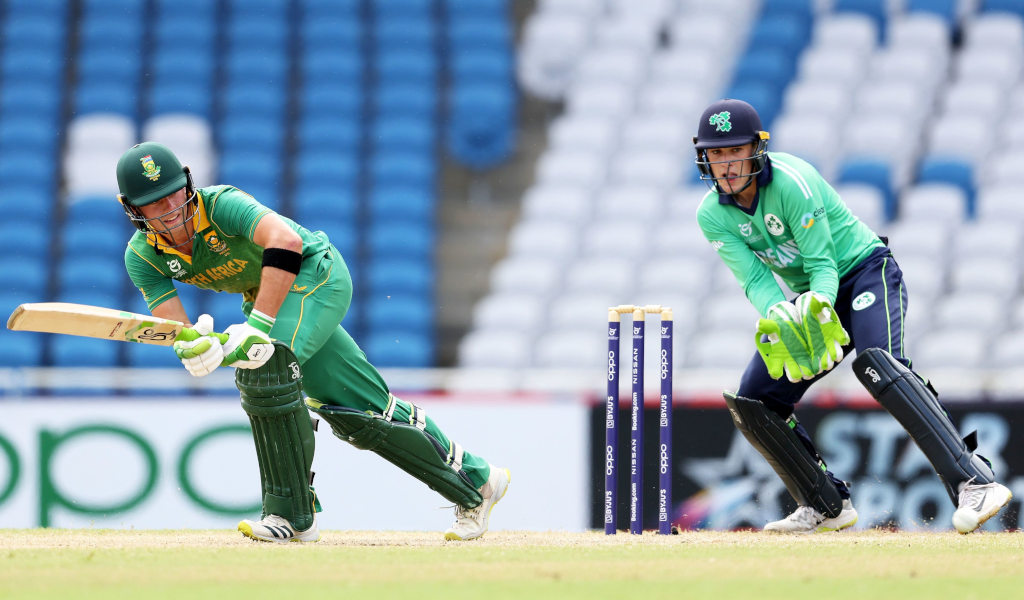 Sri Lanka sealed their qualification for the Super League stage with a dramatic victory over West Indies while South Africa defeated Ireland to also book their place in the quarter-finals.

In the day’s other game, South Africa captain George Van Heerden led from the front as his brilliant century guided his team to victory over Ireland by 153 runs in Tarouba.

Van Heerden made 111 from 93 balls while Dewald Brevis contributed 96 to South Africa’s total of 315 for seven from their rain-reduced 47 overs before bowling out Ireland for 158.

Matthew Boast (3-26) and Liam Alder (3-20) were the standout performers with the ball for the young Proteas as they secured second spot in Group B and a Super League spot.

Sri Lanka maintained their perfect record in the 2022 ICC Under-19 Men’s Cricket World Cup with a thrilling three-wicket victory over West Indies at Conaree Sports Club in Basseterre.

The hosts went into the contest knowing they needed a big win to stand a chance of qualifying for the Super League quarter-finals, with their opponents and Australia ahead of them in Group D.

Openers Shaqkere Parris and Matthew Nandu ensured they made a steady start, reaching the end of the fifth over for 20 without loss before Treveen Mathew removed the latter for seven.

Parris was then bowled by Dunith Wellalage for 16 before Teddy Bishop and Kevin Wickham combined for a fruitful partnership, taking the West Indies to 102 for two after 26 overs.

Bishop was eventually removed on 45 by Wellalage, caught by Mathew, but Jordan Johnson picked up where his teammate left off as he raced to 26 from 30 balls.

Wickham reached his half-century before falling for 56 to Matheesha Pathirana in the 38th over, although Johnson and Rivaldo Clarke kept West Indies ticking along nicely.

Two wickets in three balls in the 45th over stunted the hosts’ momentum, though, with Wellalage accounting for Johnson as he fell three runs short of his fifty before Giovonte Depeiza was run out moments later by Anjala Bandara without scoring.

In response, Sri Lanka lost opener Chamindu Wickramasinghe in the first opener as Nathan Edward enticed him into a flick outside off stump that went straight to Rivaldo Clarke.

Sadisha Rajapaksa and Shevon Daniel got their side back on track as they reached the end of the 11th over on 56 for one before Daniel was removed by McKenny Clarke for 34.

Rajapaksa powered on regardless and despite losing Sakuna Liyanage (9), he reached his fifty in the 25th over with support from new partner Anjala Bandara at the crease.

Bandara contributed 40 from 52 balls before his wicket was taken by Isai Thorne, with Rajapaksa (76) also falling the same bowler in the 40th over as Sri Lanka reached 200 for five.

With 51 still needed off 60 balls for victory, Shiva Sankar removed Wellalage (15) to set up a tense finale as Ranuda Somarathna and Raveen de Silva came together in the middle.

Mckenny Clarke bowled De Silva (13) but a nerveless 28 from 27 balls from Somarathna saw Sri Lanka home as they secured a three-wicket victory with 10 balls to spare.

A blockbuster century from South Africa captain George Van Heerden propelled his side towards the Super League quarter-finals as they defeated Ireland by 153 runs in Tarouba.

The two sides started their all-important final Group B game level on points, with South Africa possessing a narrow advantage in the table thanks to their better net run-rate.

With India all but assured of their place in the Super League last eight ahead of their final game against winless Uganda, South Africa and Ireland faced a shootout for second place.

And Ireland made a dream start when Reuben Wilson removed South African opener Valentine Kitime in the first over for a duck before Liam Doherty bowled Ethan-John Cunningham (11).

At 18 for two after four overs, South Africa were wobbling but Dewald Brevis soon restored order and moved to 27 from 29 balls with two fours to take his side to 53 for two after 10 overs.

Ireland responded by taking the wicket of Gerhardus Maree (14) as Wilson struck again, yet that brought Van Heerden to the crease to form a formidable partnership with Brevis.

Brevis reached his half-century with a four off the final ball of the 22nd over and continued to find the boundary at regular intervals as Van Heerden provided support from the other end.

But just four runs short of his century, Brevis was punished for a loose cut shot off Scott MacBeth as a diving full length catch by Matthew Humphreys at gully sent him packing on 96.

While that wicket briefly halted South Africa’s momentum, Van Heerden soon took up the baton and brought up his fifty before stepping on the gas with Andile Simelane.

An explosive 25 from 12 balls from Simelane, which included three sixes and four off MacBeth in the 38th over, only added to Ireland’s troubles as South Africa moved to 207 for four.

Simelane was dismissed in the next over but Mickey Copeland chipped in with a high-octane 43 from 18 balls before Van Heerden brought up his century with a four in the 46th over.

Van Heerden eventually lost his wicket in the final ball of the innings, which was shortened to 47 overs due to an earlier rain delay, with South Africa finishing on 315 for seven.

Ireland’s response could not have got off to a worse possible start as Liam Doherty was caught by Maree off the bowling of Matthew Boast for a golden duck in the first ball of the innings.

Nathan McGuire steadied the ship with 42 from 33 balls before Simelane took his wicket, with Joshua Cox and Ireland captain Tim Tector both falling cheaply to Boast.

Philippus Roux (33) provided some resistance along with Humphreys (38) but a lack of support meant Ireland were always fighting an uphill battle and they were eventually all out for 158.

Boast was the star of the bowlers for the young Proteas with three for 26 while Liam Alder also took three for 20, with Asakhe Tsaka and Simelane contributing two each.

Meanwhile, five West Indies players and four further India players have received positive PCR test results for COVID-19 through the official event testing programme. The players are currently self-isolating and are being monitored and cared for by the medical team.