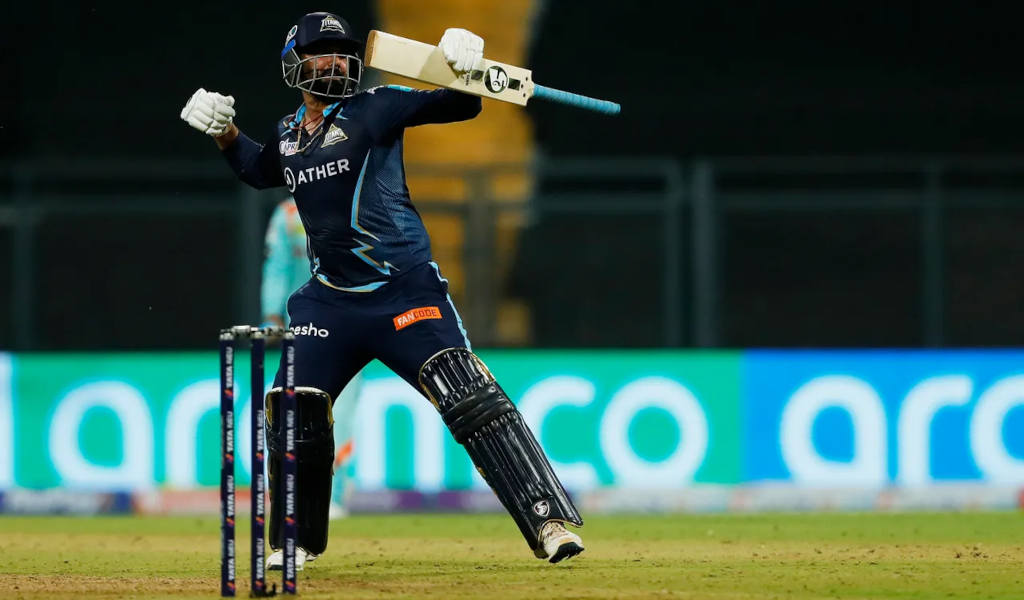 Gujarat Titans began their Indian Premier League (IPL) 2022 campaign with a 5-wicket victory against the Lucknow Super Giants at the Wankhede Stadium in Mumbai.

Mohammad Shami starred with the ball and scalped three wickets before the Titans batters made valuable contributions at the death and held their nerves in a tricky run-chase.

The Gujarat Titans had a tricky start in their attempt to chase a target of 159 as they lost two early wickets.

Shubman Gill was dismissed for a duck after the opener was caught by Hooda off Dushmantha Chameera.

The seamer scalped his second wicket by launching the delivery right in the block-hole to dismiss Vijay Shankar. GT skipper – Hardik Pandya got off the mark with a stylish flick towards mid-wicket for four.

Gujurat Titans start with a win

Opener Matthew Wade supported the Gujarat Titans skipper’s attacking display with a sweetly timed four as the Titans were 44-2 at the end of the powerplay.

After a quiet 7th over, Pandya clubbed Ravi Bishnoi for a six over long-off. The fifty partnership was up between Pandya and Wade and the Titans were 72-2 at the ten-over mark.

The very next delivery saw the dismissal of the Titans skipper who Manish Pandey caught in the deep off Krunal Pandya, who won the clash of the brothers.

Deepak Hooda came in to bowl the 12th over and removed the well-set Wade after the left-handed batter was deceived by the spinner’s delivery which crashed the stumps.

The momentum was back with the Super Giants after the next three overs produced only 12 runs. Gujarat Titans were 91-4 with Rahul Tewatia and David Miller at the crease.

However, Hooda conceded 22 runs in the next over after both Miller and Tewatia smashed a four and a six each. The next over was no different for LSG as Tewatia continued his fireworks and hammered two fours and a six against Bishnoi.

The Titans required 29 off the last three overs. Miller smacked a maximum straight down the ground but was caught inside the circle on the very next ball off Avesh Khan’s bowling.

Abhinav Sadarangani, who was the next man in, smacked three valuable fours, with eleven required off the final over. Tewatia wrapped up the chase with a four towards the off-side and the Titans won the game with 2 balls to spare.

Earlier, the Lucknow Super Giants were put in to bat first at the Wankhede. The Lucknow skipper – KL Rahul was caught behind on the very first delivery, courtesy of a peach from Mohammed Shami, who was spot-on with his execution.

Evin Lewis, who was the next man in, got things going with a four down the leg side. It was Shami’s express pace once again that castled the stumps of Quinton de Kock as the LSG openers were back in the hut inside the powerplay.

Varun Aaron entered the wicket-takers club, thanks to a sensational running catch in the outfield by Shubman Gill to dismiss Lewis.

Pressure further increased on the Super Giants after Shami claimed his third wicket and disturbed the timber to dismiss Manish Pandey in the fifth over. LSG were struggling at the end of powerplay, with a total of 32-4.

Deepak Hooda and Ayush Badoni, who were the two new batters, began the rebuilding phase for Lucknow in the middle overs. Hooda played a release shot for a four off the bowling of Hardik Pandya in the 9th over.

Hooda began to accelerate after the 12th over and dispatched two fours and a six against the bowling of Aaron, with a mission of lifting LSG to a competitive total.

The right-handed batter notched up a half-century in the next over after smashing a maximum against Rashid Khan.

19 runs came off the 15th over after young Badoni hammered a six and two fours against the opposition skipper while Hooda finished the over with a boundary.

Badoni smacked another six off Rashid Khan but the spinner bounced back into the game with the wicket of the dangerous-looking Hooda, who was dismissed for 55.

Krunal Pandya, who was the next man in, creamed two consecutive fours in the 18th over while Badoni wrapped up Shami’s over with a flick for four.

In the penultimate over, Badoni brought up his maiden IPL half-century in in style with a maximum off Lockie Ferguson.

The right-handed batter was caught in the final over but the Super Giants ended with a competitive total of 158-6 on board in the first innings.