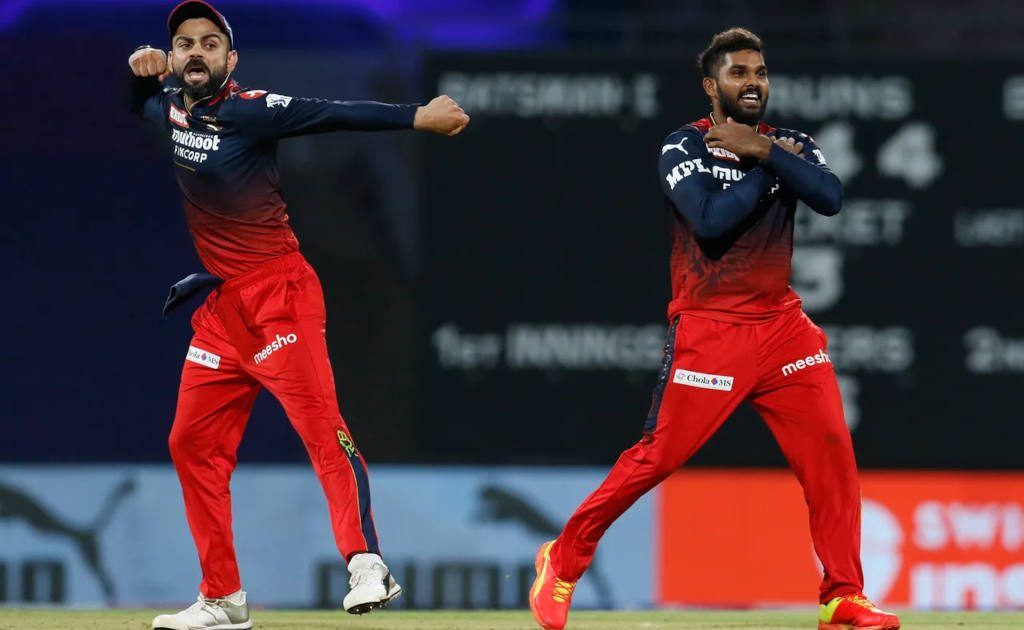 Wanindu Hasaranga returned figures of 4-20 to set up a three-wicket victory for Royal Challengers Bangalore in a low-scoring IPL thriller against Kolkata Knight Riders on Wednesday.

The Sri Lankans inspired spell of leg-spin helped bowl out KKR for 128, a total Bangalore overhauled with four balls to spare after some late drama at Mumbai’s DY Patil Stadium.

Fast bowlers Tim Southee and Umesh Yadav then claimed five wickets between them to rattle the Bangalore top and middle-order before Sherfane Rutherford’s 28 and an unbeaten 14 off seven by Dinesh Karthik got the team home.

Royal Challengers Bangalore get a first win in 2022 IPL

Bangalore, led by new skipper Faf du Plessis, bounced back from their opening loss to register their first win of the 15th edition of the Indian Premier League Twenty20 tournament.

“In an ideal world, we would’ve liked to have won more convincingly but a win is a win,” said Du Plessis, who succeeded Virat Kohli as captain with Bangalore in hunt for their maiden IPL title.

“DK’s (Karthik) experience helped in the end, cool-calm, runs weren’t never really too far away. He’s probably as cool as MS Dhoni can get in the last five overs.”

Rutherford, a left-handed West Indies batter, put on key partnerships including a 39-run stand with Shahbaz Ahmed, who made 27.

Southee took down Rutherford and then Hasaranga in one over to keep the game in the balance but Karthik finished it off with a six and a four in the final over off Andre Russell.

Hasaranga soon combined to send back skipper Shreyas Iyer for 13 and then two successive scalps in one over as Kolkata slipped to 66-7.

Russell attempted to hit back with his 18-ball 25 but fell caught behind to medium-pace bowler Harshal Patel and Kolkata innings folded in 18.5 overs.

“I thought this game was exciting. Before coming in to the bowl, I told the boys this game could define our character,” said Shreyas.

“The way we fought reflects our mentality. Proud to have taken it till the last over.”

The world’s most valuable cricket tournament has been expanded to 10 teams and 74 matches this season but league games remain restricted to two venues including Pune with limited crowd due to coronavirus-related restrictions.

Lucknow Super Giants, one of the two new teams added to the league, take on holders Chennai Super Kings on Thursday at Mumbai’s Brabourne Stadium.