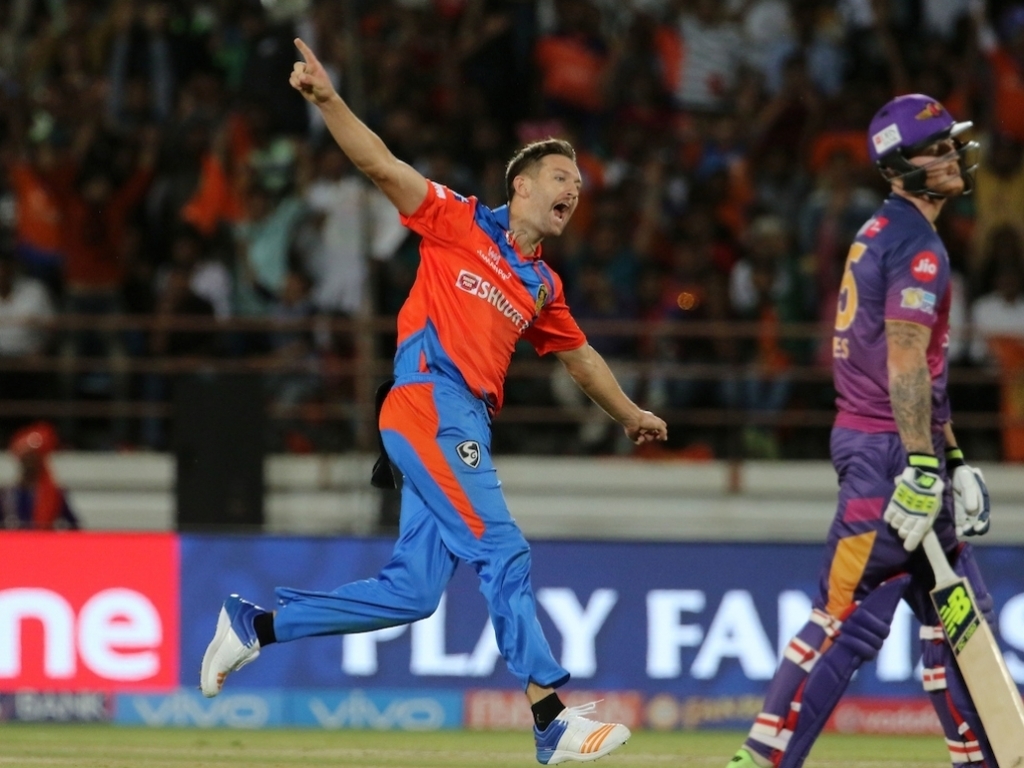 The Gujarat Lions potent top order finally came good in the 2017 IPL as they overhauled a total of 171/9 posted by Rising Pune Supergiant to to win by seven wickets.

RPS had looked set to post a bigger total but were stunned by an Andrew Tye hat-trick, the second of the day in the IPL, and could only add four runs in the final over.

Rahul Tripathi (33) and Steve Smith rebuilt after the early loss of Ajinkya Rahane (0) who fell victim to a sharp catch by Suresh Raina off the bowling of Praveen Kumar.

They would add 64 for the second wicket before Tripathi became the first of Andrew Tye’s five victims.

Tye would pick up the valuable wicket of Ben Stokes (25) who got going but couldn’t kick on after Smith (43) fell to his namesake Dwayne Smith.

MS Dhoni (5) was accounted for by Ravindra Jadeja who had a forgettable return to action besides conceding 40 runs in his four overs.

That was before Tye picked up the wickets of Ankit Sharma (25), Manoj Tiwary (31) and Shardul Thakur off the first three balls of the final over, Samuel Badree picked up a hat-trick in the earlier game and this is the first time two hat-tricks have been taken on one day in the IPL.

The Lions chase got off to a great start with Smith and Brendon McCullum blasting away from the outset, they put on 94 for the first wicket smashing 13 fours and four sixes before the former was deceived by a Thakur slower ball and was caught for 47.

McCullum fell one short of a fifty in the end when he fell victim to some brilliant bowling from Rahul Chahar who saw the Kiwi coming on the charge and dropped it in shorter beating him and having him stumped for 49.

Imran Tahir had a dreadful day at the office conceding ten boundaries but he would get the wicket of Dinehs Karthik (3) but that would be the final scalp picked up by RPS.

Finch smashed two successive sixes at the end of the 18th over to avoid any late nerves.

The win was the Gujarat Lions first of the 2017 IPL.

Lions skipper Raina said after the match: “”I think when we lost two games, it was difficult for us to come back strongly.

“I thought AJ bowled brilliantly. He is a very smart cricketer who varies his pace, especially in the death overs. Jason Roy missed out today, but then Baz and Smith did it for us. They have done it for CSK and they did it again today.”

Tye used the post match presentation and man of the match award to declare his intent to break into Test cricket: “It’s a good format of cricket, but traditionally, I would still love to play Test cricket.

“The slower ball worked very well for me.

“Every wicket is different around the world, so you have to assess conditions to find out which ball works where.”