Relaxed and laconic vs. a manic social dynamo: David and Graham Lloyd 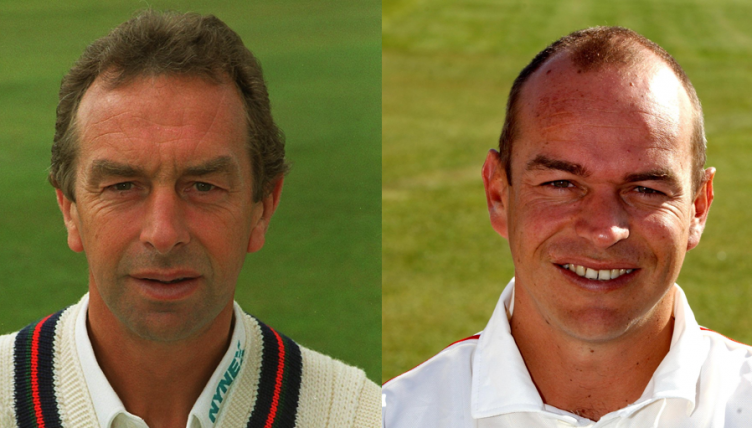 There have been 13 fathers and sons who have both played Test cricket for England. The Lloyds are a pairing often left off the list, with David, now a hugely popular television pundit, playing nine Tests and 8 ODIs for his country in the 1970s, followed by son Graham, who played six ODIs between 1996 and 1998. When Graham played for England his father was the head coach.

“I was Graham’s coach at Lancashire and with England,” David replied. “With England I worked with Mickey Stewart and learned from how he was with Alec and got a good idea of how to tackle it. So we never had any problems.”

I asked Graham whether it had been different or strange to enter an England dressing room for the first time when his dad had been the boss.

“No, not really,” Graham responded. “He’s always been a big influence in the game. He’s been going 50-odd years in cricket and he’s got to the top at everything he’ done, whether it’s playing, coaching, TV or umpiring, although he never umpired a Test match.

“It didn’t faze me at all that he was there, he was coach with England when I got selected to play and I just saw him in that dressing room environment as coach at that time and nothing else. Of course, it’s different when you’re at home or away from the game and he comes back to being your dad.”

“It’s just a game isn’t it at the end of the day,” Graham stated. “Grown men thinking they can find an edge and get a reaction. But it never bothered me and it soon went away because they knew it wasn’t getting through. I wasn’t interested at all.”

I asked Bumble whether he thought that cricket was in the genes. Had he handed Graham something special in his blood that made him become an international too? Or was it that he’d been exposed to the game from such an early age?

“He was very natural,” Bumble replied. “It just came to him, he watched, he copied and I couldn’t teach him anything. He just got on with it.

“For Graham, you just said the word ‘exposure’, and that was it with him,” Bumble assessed. “He got dragged around cricket because of me from a young age and was immersed in the game. As a player my business was from home and there’d be bats and pads lying around and he’d pick them up and copy what he’d been watching. He’d come in the dressing rooms and spend time watching the elite players, being around them and watching them play.”

Graham added: “I used to go and watch him from the age of 6 or 7 at Old Trafford, saw him playing in the nets, and just sat there and soaked it all in. I think it’s one of the best ways of learning, to copy others. He did coach me a little bit as well as other coaches along the way through junior stuff. I was coached all the way through the county age groups and he did do bit too, mainly practice really. As I was growing up he had plenty to say.

“As a youngster I probably had a chat with Dad and he probably would have given me advice,” Graham continued. “It would have been along the lines of you need to work hard and practice hard and don’t take your eye off the ball as you are growing up. And if you get in make it count. Because he was a pro and that was what was being told to him by the coaches and professionals. It was good advice coming down to a young lad.”

Bumble is quick to highlight the differences between him and Graham. Graham is relaxed and laconic, while he is a more manic, social dynamo. But on the cricket field the roles David and Graham played were somewhat reversed.

“I was a careful player, but Graham was carefree.” Bumble conceded. “He won the Walter Lawrence Trophy for hitting the fastest hundred in a season twice. He was a real dasher, a modern player and really quick between the wickets.

“It’s funny,” he added. “Michael Atherton’s lad is completely different to him. You know what Athers played like, he would bat and bat and refuse to give anything away. His lad reverse seeps, reverse hooks, dances down the track, plays every shot and Athers just watches and laughs. His lad Josh is outstanding in his age group, probably the best in the country, but he plays so differently to his dad.”

“It makes me chuckle,” Bumble stated. “You get pushy parents who are desperate for their sons to succeed, but what I always say is that if they are good enough to play at the highest level they will come through. If he goes out and scores a double hundred it’s him that got it, not you.”

As Graham grew up in a household where dad regularly took him around cricket grounds that exposure that Bumble had spoken about was intense and massively important to his son’s development.

“I realise now how important that was and how lucky I was to have that leg-up, to be in that environment,” Graham reflected. “I know from an early age, 9 or 10, that it was what I wanted to do and I feel very lucky and privileged to have had that kick-start.”

Having Bumble as a father hasn’t come without its pitfalls though. Bumble told me a story. Graham had said to him that he was getting fed up with people coming up to him and, rather than ask about him, they’d always start by asking how his dad was. One day he decided to respond differently.

Bumble added: “He’s as laidback as they come is Graham, but he’s a very funny lad.”

Graham laughed when I mentioned the peas story. “It’s true,” he giggled. “It was a starter of conversations I suppose. People’s ice-breaker was always ‘how’s your dad?’ and if I’d heard it once I must have heard it ten thousand times, so I tried different approaches back and that might have been one of them.”

This is an edited section from ‘Following On – In the Footsteps of Cricket Fathers’ by James Buttler available to purchase on Amazon.