Home James Buttler Use DRS technology to help umpires, not expose them 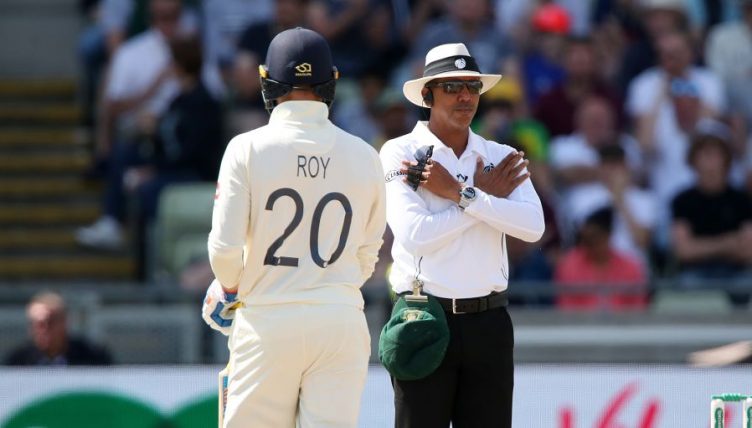 During the first Ashes Test the umpires took fearful stick for reaching double figures in poor decisions. Some were reviewed and corrected – a record eight in an English Test. Others went unchallenged and the batsmen escaped their rightful fate. None of the errors were outrageous but all were counted, replayed and mulled over endlessly. This is not a perfect world. We all make mistakes.

Technology should not be used to highlight the inadequacies of an umpire; it should be there to assist them. Without the aid of numerous slow-motion replays and with only 0.6 seconds to judge line, swing, deviation off the pitch, point of impact, contact with bat and whether the ball would go on to hit the stumps, it is fanciful to ask a human being to attain perfection.

Umpires standing in isolation in the direct focus of the cameras are exposed when they should be assisted. And we appear to take perverse pleasure in ridiculing these men doing one of the hardest jobs in the middle.

Reviewing the umpires’ decisions is good for the game if it genuinely assists the umpire to reach the right result. We are in danger however of using the DRS process for dramatic theatre rather than to adjudicate effectively.

It should not be the captain’s job to umpire the match. It is a tough enough to juggle tactics, bowling changes, field placings and to maintain morale without constantly being on a 15 second countdown clock. The jeopardy of when to review has become as much a judgement of a skipper’s quality as whether he is making the correct decisions for his team. That cannot be a good thing.

And how does the review system benefit anyone when a captain has lost all reviews? If we use technology the sport needs to create a process where reviews are more readily available but not plentiful enough to encourage captains taking a total punt. It’s a difficult balancing act. We don’t need infinite reviews and stoppages every over, but regenerating reviews every 40 overs or so ensures that a captain confident of overturning an error is more likely to have a review still available.

Once the batsman or captain of the fielding side has reviewed the third umpire is tasked with checking for a no ball, then running through varying screens from multiple angles before Hawkeye and Snicko assist with the final judgment.

But surely there can only be one outcome. Either the batsman is out or not out. With DRS that is not the case and it is incredible that everyone appears happy to accept the system’s idiosyncrasies.

To illustrate, let’s cast our minds back to West Indies game against Australia in the 2019 Cricket World Cup. Mitchell Starc was the bowler and Chris Gayle the striking batsman.

On the fifth ball of Starc’s second over of the match, Gayle was adjudged caught behind and replays showed that the ball had shaved off-stump rather than making contact with the bat. Gayle reviewed and was not out.

The final ball of Starc’s over, the third of the match, he speared in a Yorker and the umpire raised his finger for lbw as it struck the Universe Boss on the toe. The replays show the ball was missing leg stump and umpire Chris Gaffaney’s original decision was overturned.

Two overs later however and Gayle was asking for another lbw decision to be sent upstairs. Gayle had been struck low on the pad by another Starc yorker and he’s bang in front of middle stump. The umpire’s finger is raised, and ball tracking showed that the ball was clipping leg stump, but only just. West Indies retained their review as umpire’s call had been out and the big man was on his way.

Now consider this. If the umpire had given the same ball not out, perhaps believing quite rightly as it proved, that the ball was close to missing leg stump and Aussie captain Aaron Finch had reviewed. The same replays show the ball clipping and Gayle would have been given not out as the ball was only clipping.

How on earth can the same delivery be out or not out depending upon which team reviews. Surely the real point of a DRS review is to take the umpire’s original and questioned decision out of the equation and allow a third umpire to make a more informed adjudication.

People will tell you that the technology requires a margin of error, yet it is the same system for both sides and current technology is more reliable than an umpire’s human eye.

Some people have suggested that if the ball is hitting it should be given out regardless of the umpire’s call. But we would see batsman out left right and centre and lower scores and shorter games.

My suggestion is we completely remove the umpire’s call from the review and rely purely on what the replay technology tells us. To avoid any qualms about accuracy of the system we require 50% or more of the ball to be hitting the stumps to confirm an lbw decision. Anything less, if the ball is clipping the woodwork, the batsman is given the benefit of the doubt and plays on. The original on-field decision has no bearing.

This isn’t a perfect resolution for lbw review, but it is fairer and more transparent than the current farce. A batsman given out lbw would survive in some instances even of replays show the stumps would have been broken by less than 50% of the ball, but the aim has to be consistency, fairness and ease of use. And benefit of the doubt, whether with human eye or technology, has always been a major aspect of the umpire’s decision-making process.

By removing umpire’s call we create a system that is identical for both teams and the paradox of two potential verdicts arising from the same delivery is removed, regardless of who instigates the review.

Without umpire’s call we give the captain’s more reviews so the jeopardy for them is lessened, and more correct outcomes are possible throughout the entire innings.

Cricket needs to use the technology available to ensure fairness of decision and to protect the integrity of the umpire. It’s a tough job and they need more support. Why not give umpires a few reviews too so that they can admit they are unsure and can go upstairs to gain assistance in making the call? If you think this is taking power away from umpires, it is the umpires that are using technology.

Yes, this all takes time out of the game in an era of slowing over-rates, but don’t we want to see the best team win and the best players continuing at the crease until they are truly given out?