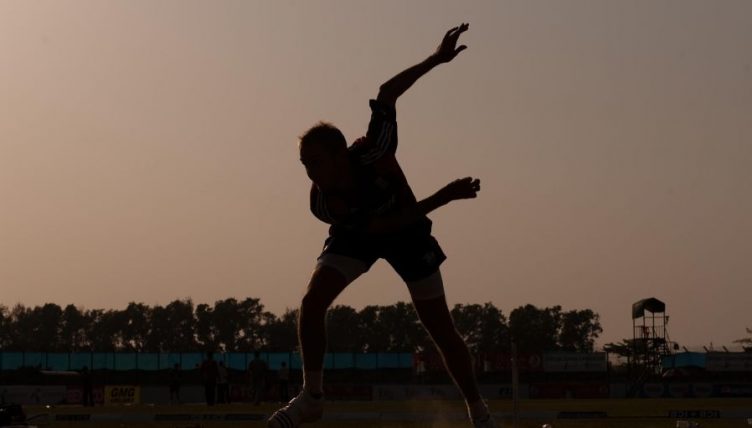 In my experience, the world is divided between fast bowlers….and everyone else. They are a breed apart no matter the level you’re playing at. Sometimes wild, sometimes angry, occasionally actually evil, they are not to be messed with.

At school, there were always boys who, on being tossed a corker for the first time, would simply want to hurl it down the wicket at top speed. Driven on by too much testosterone, they would run in at full speed, not realising that it is really hard to legally bowl a ball when you’re sprinting hard and fast, often sending themselves sprawling to the turf in the process of trying to do so.

Eventually some would learn that good fast bowling involved more than running quickly and that they had to harness their innate desire to hurt people with a hard ball if they wanted to be any good, but some could never quite manage that. I know this because I have encountered and played alongside two of the most frightening fast bowlers that ever walked the earth, or the north of England at least.

I once played a couple of times for a Durham mining village team in the late 80s, just making up the numbers, really. Their demon bowler was a man only known as Zoob. Yes, Zoob. With a bowling action that combined the butterfly swimming stroke with the discharging of a bazooka, he would dash in and put everything into every single delivery and in doing so would release a belch of groaning air that Monica Seles would’ve been proud of. This was how he got his name. The noise that exuded from his body was indeed ‘zoob’ the ‘zzz’ pushed out seemingly through clenched teeth as he bowled and the ‘ooooob’ as the ball left his hand. He didn’t seem able to stop it happening and you always knew when he’d slung a really, really fast one down because the ‘zoob’ would be especially loud.

Now, Zoob loved to hit the batter more than the timbers. I think he took it as an opportunity to discharge his anger at life in the name of sport. He was a brooding sort, mid 20s, skin like sandpaper, short and with arms like a pit pony’s leg, he didn’t so much run in as scurry like a ferret chasing a rat up a drainpipe. He was effective simply because he was scary and many a jelly-legged batter was dismissed taking defensive measures against deliveries that were nowhere near the wicket but very near their head.

He was, to any reasoned observer, abso-bloody-lutely bonkers. His sledging largely involved telling batsman they were about to die and he was about to kill them. He was bloody terrifying and I was on his side, lord knows what it was like to see this whirling dervish from the crease. If anyone did manage to score off him, he seemed to take it not just as an insult but as a perversion of the laws of nature and the next ball would come down with a volcanic ‘zzzzooooob!’ He eventually got banned, or simply not asked back to play. He’d delivered a ball and had been unusually dispatched for four. Zoob’s response was simply to headbutt the man on the bridge of the nose, asserting “you don’t f**king do that to me”. As you do.

Zoob was bad enough but he was no Bomber. Bomber was possibly the most dangerous man in the North of England not inside a prison when he had a cricket ball in his hand. Oh he was as mad as Zoob, but he was actually a very good bowler with an action not unlike Jeff Thomson in his prime. While Zoob just flung the bloody thing down in a fit of rage and let the ball create random chaos, Bomber knew exactly what he was doing. And that made him all the more dangerous and all the more despicable.

Weirdly, until he pulled on the whites, he was a gentle, even quiet soul, but there was something about that shining cherry that put fire in his blood. I saw him playing for teams in and around Harrogate in the early 90s, usually on wickets that should have been condemned as a human rights crime, so unpredictable was the bounce. Bomber would deliberately pitch one short and it would rear up like it was a rubber super ball and when that happened, all bets were off.

He broke noses, cheekbones, forearms, jawbones and once, I am told, somehow tore a man’s scrotum almost in half. He really should have been illegal. He once took 9 for 5. Yes 9 wickets for 5 runs. Like with Zoob, the fear of being killed, or at the very least losing the use of your face, worked in his favour but he also had the advantage that once he’d softened a batter up, he could throw one down on a full length and skittle them out. He was dynamite but something was wrong with him. When he had that ball in his hand he lost all human empathy.

One time I found myself standing in for someone in a side to make up the numbers. And Bomber happened to play for them. His was a silent fury as he sped in, a deadly assassin in white. He also took being scored off as a disparagement of his character. So much so that I feared for any batsman that did so, knowing what was to follow was likely to be one of his most dangerous deliveries: a beamer. So when, from my position on the long on boundary, I saw a batsman sky one of his short pitches over my head for a 6, my guts felt heavy. He really ought not to have done that.

Bomber motored in again. He quite deliberately released the ball early, I saw him do it. It didn’t slip out. No. He let it go and sent it like a tactical nuclear weapon at the head of the batsman. I have no idea how fast it was, I only know it was very bloody fast. My heart rose into my throat as it struck him, a tall rangy fellow, under the ear, sending him to the ground in a heap. He’d killed him. He’d bloody killed him.

As we ran to help the man, shouting for someone to call an ambulance, we knew we were all complicit in this because we all surely knew what he was going to do, because he always did it. He should’ve been warned. Not that would have made any difference, I suspect. His opponent hadn’t been able to get out of the way. There was a collective panic for a few seconds as the felled batter didn’t move.

But as I reached the wicket, I breathed a sigh of relief as the felled cricketer was not dead. He was dazed and bruised, but he was fine. So fine in fact that as he got to his feet to find Bomber, the insanity in his blood now leached away, holding out an apologetic hand, he kicked him hard in the balls and told him to f**k right off you pr*ck”. It was the least he deserved.

Spin bowlers might be eccentric and odd, medium-paced plodders reliable and boring, but fast bowlers? There is something of the night about them.