Home John Nicholson Dealing in boundaries: the gift and curse of the Fat Batter 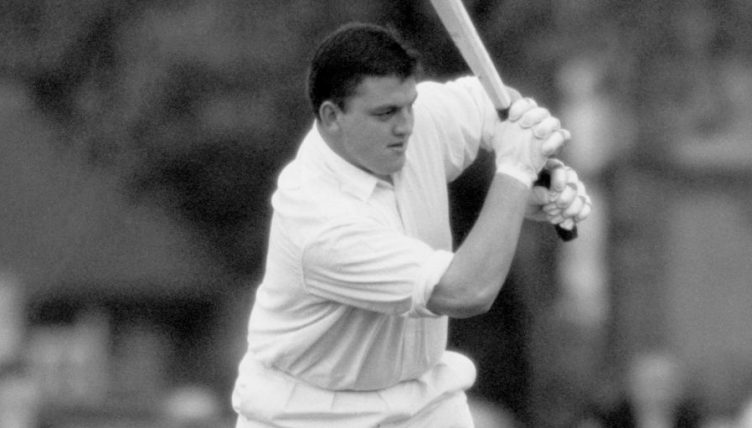 Cricket offers many pleasures and entertainments. And one of the best is the fat batter. Who amongst us does not love a fleshy giant, wielding the willow like a mere matchstick?

They are a rarer sight these days. Where once we had players of all shapes and sizes, now we have lithe panther-like athletes and players who even take to the pitch sober. It is all very disappointing.

But not long ago, it was very different.

As a boy I was a big fan of Durham-born opening bat Colin Milburn. Colin was a big unit more akin to a substantially lagged school boiler than an athlete. Apparently he was 19 stone at his peak, which is a lot of power to put behind a ball. His top score for his county Northamptonshire was 243 and he knocked 139 for England too and had a 46 Test average, albeit across only nine games. Being massive did not seem to inhibit his career at all.

Sadly, a car crash robbed him of most of his sight and obviously that ended his career. Even so, he was a great inspiration to every robust club cricketer, just as David Shepherd was too, another barrage balloon figure, who used to spank the ball around in the Gloucestershire middle order and later gained fame as an umpire.

And so it was when I went to college in Newcastle and got involved in the cricket team, there was a chap there who was Milburn and Shepherd rolled into one enormous hairy pink blancmange of a man. Stotty, as he was called, named after the local large bread delicacy, was over 6’ 2” at least 22 stone and with size 15 feet, a standard cricket bat looked tiny in his giant paws.

He scored more sixes than anyone I’ve ever seen. He scored them even when he didn’t mean to. If he caught it off the sweet spot, it would launch into the stratosphere, rising out of the park and into many a back garden, breaking greenhouses, allotment sheds and rendering unconscious passing dogs.

However, for a man who could’ve passed for a pink bear on its hind legs, he was no mere clubber of the ball. In fact, totally at odds with his physique he was a cultured opening batsman, capable of rolling his wrists over a pull with a craftsman’s touch. He didn’t take mighty swings either, he didn’t need to with all the weight he could put behind even a modest drive.

To be honest, he was impossible to get out. He just seemed to dominate the ball with his bulk. Short pitches were swatted away like flies, but if you pitched it up with one big stride, he’d plant a huge front foot down and turn it into a full toss and add another six to the total. Your best hope was to get everyone else out and keep Stotty away from the ball as much as you could.

I got him out just once on a wet wicket in Chester-le-Street in a First XI v Second XI game. I was in the second, due to being the bowler everyone loved to whack around. He’d scored over 50 off three of my overs and I was expecting it to only get worse when I delivered him my googly.

It turned more than any ball I had ever seen turn, probably something to do with the damp and the fact the pitch was little better than a potato patch. He looked to send it back from where it had come but got only a thin edge to the keeper. Everyone was shocked. You didn’t get Stotty out. But I had. I think it was his only dismissal that season.

We all thought he’d be professional cricketer. He seemed so good. I once saw him score 198 in a long afternoon, 120 of which were sixes. Even at this lowly college level this was amazing. He was the ultimate Fat Batter.

But there was one problem. Stotty couldn’t run.

Well, actually, that’s not quite true, he could run but he needed some advance notice that such extreme activity would be required. Preferably 48 hours’ written notice. To see him try to run for a quick single was like watching the world in slow motion. It was as though he was wading through mercury as his massive frame lurched forward, his inner thighs rubbing together with enough friction to set fire to something. Mind you, once he did get going over about 100 metres there was no stopping him, his legs carrying him forward with an irreversible momentum. We used to joke that he should have a parachute on his back like a drag racer to pull him to a halt.

But this was of no use as a batsman. So he’d long given up trying to run for anything and just scored boundaries instead. This was very frustrating if you were the non-striker as you were stuck there for the whole over. This also meant that when you took guard, you couldn’t score anything but boundaries either because Stotty just would not run for anything.

A good single or even a three would go to waste. You’d stand there like a lemon as the fielder trotted down to long leg to get the ball in the full knowledge that Stotty was going nowhere. Some tried to coax him out by advancing down the strip yelling “move your f**king arse Stotty that’s an easy one!” but he’d shake his head, hold up his massive hand and back they’d have to go, sometimes being run out in the process.

The anger this induced in his team came to a head one day when we insisted that he had to run, at least for easy singles, or he’d be dropped. It was no fun for the rest of us we explained, even though he won most matches for us single-handedly.

So next game, totally out of character, he did attempt a single, possibly to prove that it was nothing but folly, and was run out before he’d even got halfway down the track, the non-striker already home at his stumps, just watching him go. It was one of those run outs when there is so little chance of the batter getting home that the bails are lifted off rather than the stumps thrown down. But even so, Stotty gave it his best, seeing the ball being lobbed in, he dived forward, bat extended to try and slide in. It was like seeing a buffalo being slaughtered as he crashed to the ground in a cloud of dust and a huge expulsion of air.

As he got to his feet, covered in muck, he roared in anger and holding the bat in his right hand, destroyed the stumps with a big swing. Normally a gentle soul, this was very out of the norm and a little upsetting to see. We’d bullied him into doing something he couldn’t do. I wasn’t the only one who felt a bit guilty about it.

And, as though to punish us, he refused to play again and as far as I know, he never did. Not at college anyway. I often wonder if he’d lost four stone in weight and learned how to run, he could’ve have been a top player. He had everything in his armoury. He was the ultimate Fat Batter but in some ways, he was a tragic figure, both blessed and cursed by his physique. Hopefully, he’s still out there somewhere, now aged 59, still flicking a six off his pads and still not even attempting to run.