Home John Nicholson Too wet, too dry, too grassy, too bare – the trials and tribulations of the groundsman

Too wet, too dry, too grassy, too bare – the trials and tribulations of the groundsman 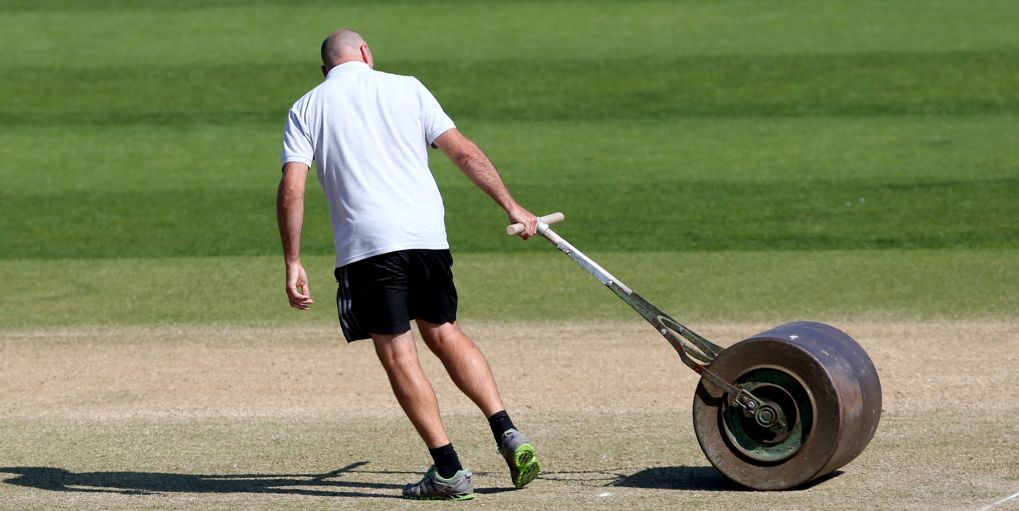 Last week I was discussing how playing cricket in the rain should be more common than it is. But, as someone pointed out to me, this would attract the wrath of many groundsmen (they do always seem to be men). And they’re right. That got me thinking.

Strange breed, the groundsman. Whatever level they work at, they do tend to become very protective of their wickets, treating them with more loving care than their own families. They get defensive about their ‘baby’ and worry that they will be criticised if they produce a dead one, or a green one, or basically anything extreme that might benefit one side or another. Many are the groundsmen who have dismissed the captain’s hint or that he might prepare it to suit their best bowler. That was not cricket, sir.

My granddad Fred, a devotee of the game who watched a lot of Yorkshire cricket told me about the Headingley groundsman, whose name escapes me now, who prepared the wicket for the 1972 Test against the Aussies. A fungus had developed under the covers after a wet week, killed all the grass and turned the wicket into a dead strip. It didn’t bounce at all and although you might argue it’s the same for both sides, England had ‘Deadly’ Underwood and it looked as though it’d been prepared for him specifically. In the second innings, in his first 13 overs, Underwood took 5 for 18, Australia were eventually dismissed for 136 and lost comprehensively. Fred said the groundsman was mortified that his reputation was being impugned by the press and opposition, but that he was powerless to stop what nature had started. It went down in history as the Headingley Fusarium Test.

The 1972 #Ashes Test at #Headingley was dogged by controversy over the pitch which England claimed had fallen victim to fusarium, a fungus that had killed the grass; Australia suspected foul play. Whatever the truth, it suited Derek Underwood who took 10 for 82 as England won pic.twitter.com/3Mfxz3yce8

The groundsman who looked after my local cricket club’s strip in the 1970s would’ve sympathised. The role was so important even at Stockton’s level that in 1953 they built him a house. What a great gig. You get a free place to live. From October to March, there can’t be much work to do but from April to September your life is one of ceaseless fret and worry.

The weather used to really annoy him, whatever it was. He saw it as the enemy that was always corrupting his fine work. It was always too wet or too dry, never just right. Like most groundsmen, he was paranoid that the wicket should play well and that he wasn’t thought to be ‘fixing’ it for the benefit of the home side. He dreaded sides getting skittled out for low scores for that reason and was nervous if anyone racked up a big score.

But in the baking hot summer of 1976 when it didn’t rain, not even in the northeast of England, for the best part of three months, it slowly but surely destroyed all of his good work, turning a plush square in late April to a desert by August.

On top of being dry, it was over 80 degrees every day for weeks on end. It was quite remarkable. I remember buying two pints of lager from the bar one hot late July day, the sort of hot July day that cricket is always played on in our winter imaginings. I was only 15 but you could always get served at the cricket club. It was as though the licencing laws didn’t apply to them somehow. They knew you were underage but I think the assumption was that if you were sitting and watching cricket, you weren’t the sort of lad to cause anyone any bother. So the woman behind the bar pulled the pints as I made small talk about the heat.

“It’s that hot, it’s like we’re living abroad” she said, which amused me. The idea that anywhere abroad was always hot was not an uncommon one at the time. Another auld lad said to me that summer “if it gets any hotter it’ll make us turn foreign” which clearly plugged into the same notions. Quite how this would manifest itself was unclear. My grandma genuinely feared it would make us all turn to eating garlic and chillies like hot middle-eastern countries. “And you know what it does to them” she said one day, though conspiratorially narrowed eyes. The idea that spicy food angried up your blood was not uncommon amongst older folk back then. Even though garlic is as English as onions, my granny feared any food stuff that, in her imagination at least, didn’t originate from Yorkshire.

The heat went on and on and on.

There was a hosepipe ban, so the groundsman couldn’t even water the wicket. Consequently it turned to a dusty burnt brown track. Cracks opened up in the exposed earth and even though he attempted to fill them, grouting them with a mix of soil and sand, during a game they would crack and open up again. If you could pitch a ball on one of them, it had the potential to fly off at an angle. Craters opened up with crusts of soil flaking off. The block holes looked like a mini bunker on a golf course.

If you turned up well before the start of play, it wasn’t uncommon to see him on his hands and knees inspecting the grass blade by blade. It looked for all the world like he was kneeling in prayer to the cricket Gods to deliver a playable pitch.

He’d use hand rollers to try and flatten down the deteriorating wicket but it made little difference. Now like concrete, the ball bounced high and fast, suiting fast bowlers, but also being worn and dusty delivered the spinners a lot of joy as well.

But to the groundsman it was like his pride and joy was getting beaten up every time it was played on.

Then on 1st September, a bank holiday, after weeks of dry heat, it rained like it was judgement day. As it came down in a truly biblical deluge, all I could think about was what it would do to the cricket pitch. What it had done was wash a lot of it away in rivulets of muddy water. But even by the following weekend, he’s got it into playable condition. It looked flat, quite even, had few holes in it now and it actually had a bit of green on it. He’d apparently worked on it all day all week with the sort of dedication alien to most people, so beloved was that strip to him. You wouldn’t think it was possible to get so attached to some grass, but it isn’t uncommon in the profession.

So in the last couple of weeks, as storms have raged, and rain fell almost without stopping, spare a thought for the groundsmen who even now will be worried sick about what it’s doing to their precious wickets as the start of the season is but a few weeks away. Still, at least no-one can see you crying in the rain.