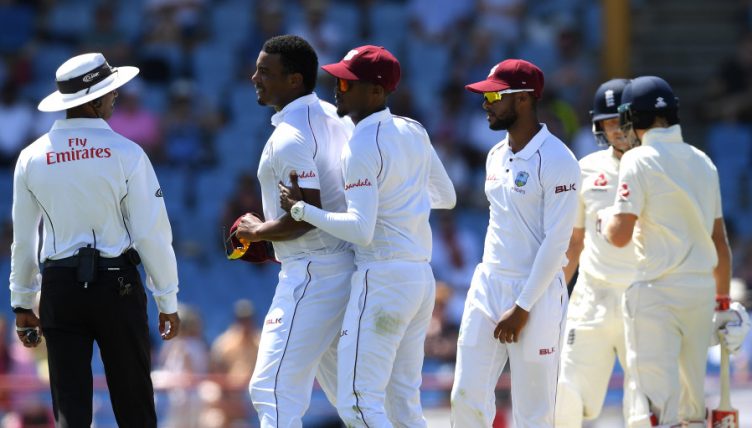 Sledging in cricket had a long, sometimes hilarious history. But in light of the recent Joe Root and Shannon Gabriel business, you have to wonder what on earth the bowler thinks he is doing by apparently making some sort of old school homophobic comment. This is all so dated and unnecessary.

If, as would seem to be the case, this was a schoolyard type of ‘insult’ of the ‘you big poof’ variety, not only is Gabriel behaving like an idiot, he’s massively out of date and inappropriate with such abuse. He just made himself look stupid and bigoted. Not the intended result of his words, I’m sure. His intention was to undermine Root, clearly, but has that ever really worked?

I was once playing an under-16 game at Stockton Cricket Club. A fierce-looking fast bowler who, despite only being notionally 15, appeared to already have a full beard (over-age ringers were common), ran in and delivered a short ball which I, being keen on the pull shot, despatched to the boundary for four. He stood in the middle of the wicket and stared at me as though I’d done something very wrong.

‘Do that again and I’ll break your face,’ he said, fancying himself as a bit of a Dennis Lillee.

An ode to the wicketkeeper; beating heart of every team

From Procter to Malinga: a celebration of weird bowling actions

This was long before the days of helmets but even so I didn’t take him seriously. I’d been told by an old timer never to forget that I was the one with a big bit of wood in my hand and that was a bloody good defence against anyone bowling a ball at my head.

He ran in again, pitched it even shorter this time and as it flew towards my head, I went on the back foot and did little more than scoop it up and over the boundary for six. This wasn’t because I was a great batter by any means but more down to the boundary being short and it being a terrible if fast ball.

He uttered another expletive at me which referred to a part of the reproductive female anatomy. Next ball was a beamer right at my face. I just stepped back and whacked it square for two. And so it went on. I hit him for 14, 8, 10 and 7 in the four overs I faced him. The swearing, abuse and name-calling had absolutely no effect. And if that’s the case for a kid playing club cricket against an overly bearded teenager, then it must be the case for a brilliant Test player like Root.

I’ve never understood why sledging had any primacy in a gentleman’s game such as cricket. You can see the intimidating factor in football when the likes of Vinnie Jones would routinely tell an opposition player that he was going to break his spine with a look in his eye which suggested he absolutely could and would, but in cricket, someone telling you you’re a bit of a nancy boy surely was always water off a duck’s back to every batter. Rather, it makes it look like the bowler is afraid he can’t get you out by merely bowling very well.

If I was good enough to play Test cricket and I was at the crease a bowler, fielder and keeper telling me I was a wuss, my wife was of easy virtue and my genitals extremely small, just wouldn’t make any difference at all to my concentration. In fact, if it was to have any effect, it’d be wholly positive because I’d know they were panicking. The noisier anyone is on the pitch, the less you have to worry about them. It’s the silent assassin you have to be careful of.

In that same game, the abusive fast bowler was replaced by a kid without any facial hair who said nothing and bowled off-spin. The third ball he delivered turned sharply, I played around it and he clean bowled me. He’d been almost the exact opposite of my erstwhile abuser but had achieved in three balls what he hadn’t been able to in 24.

There’s no excuse for hurling abuse at a fellow cricketer on a moral basis first and foremost, but I also seriously doubt it’s effectiveness as a tactic. It makes you look weak and rattled and given the composure of Root’s retort and the fact he ended the day 111 not out, it clearly had no negative effect on England’s skipper.