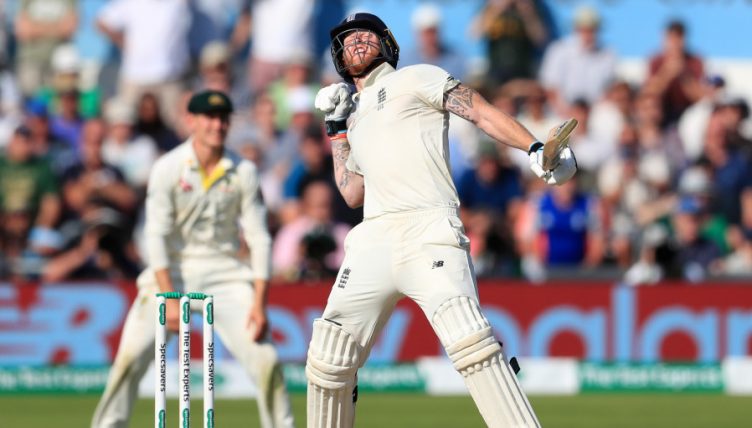 Ben Stokes reveled in the aftermath of his Headingley heroics, describing the occasion as ‘certainly close’ to topping the dramatic World Cup success, and revealed that his meals in the build-up to the day were far from a champion’s breakfast.

England pulled off a remarkable one-wicket victory in Leeds to level the series at one match a piece. The victory ensured the hosts’ hopes of a dramatic Ashes and World Cup double remained alive going into the fourth Test at Old Trafford in nine days’ time.

A magnificent unbeaten 135 from all-rounder Stokes was the catalyst that saw England to victory and shattered the record for their highest ever successful run chase in the longer format.

Speaking in the aftermath of what may perhaps surpass the iconic Leeds Test performances of Sir Ian Botham and Mark Butcher in 1981 and 2001 respectively, Stokes said: “I’m obviously over the moon that we’ve managed to stay in the series. We knew if we lost this game then the Ashes were gone.

“When a number 11 comes out needing 70 to win, I knew what I had to do in terms of the game situation. The only time I started to get a little bit nervous or panicking was when we got into single figures.

“To be sat here, especially after getting bowled out for 67 (in the first innings), to still be in with a chance of getting the urn back is an amazing feeling.

“Walking off there at the end when the whole of Headingley was standing up and celebrating was a very special moment and something I had to try to take in because moments like that don’t come along very often.”

When quizzed about how Stokes prepared ahead of what was always going to be a high pressure day as England looked for an Ashes-saving hero, Stokes replied: “My wife and kids came down and they got there at around 10 o’clock. My wife walked into me eating pasta in my boxer shorts!

“Last night, I think had a knock-off Nandos and two bars of Yorkie biscuit and raisin. And a couple of coffees in the morning.”

His 76-run tenth wicket partnership with Jack Leach had cricket lovers worldwide on the edge of their seats as Australia came close to dismissing each batsmen on multiple occasions.

Acknowledging the tailenders’ vital contribution and commenting on Nathan Lyon’s fumbled run-out opportunity, Stokes said: “I think Jack Leach must somehow have been watching Monty Panesar at Cardiff. I could not believe when I looked up. Me and Leachy could have had a conversation he was that close to me.

“That was huge panic stations there because he was so far out. Obviously in that pressure situations in games cam really affect what a human does. Nine times out of 10 Nathan Lyon would pick that ball up and take the stumps off.”