AB and Rilee, master and apprentice 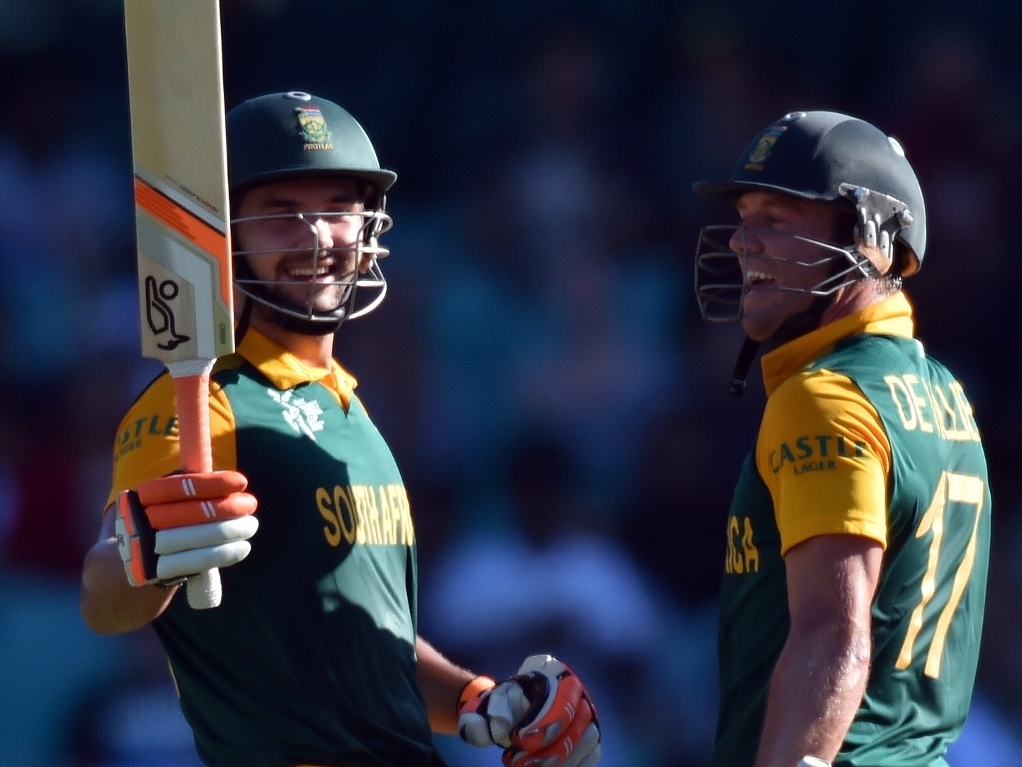 AB De Villiers now has the fastest ODI 50, 100 and 150 after blasting the West Indies to smithereens in Sydney. The superlative cupboard has long since been rendered bare by the most dexterous, innovative and dashing batsman in the modern game.

There was no need on De Villiers' part for fretting or open letters from ex-players after India dampened the Protea fire, in an MCG that may as well have been Eden Gardens, such was the swell of Indians amongst the 86,000 inside the Colosseum.

So how does he share this outrageous gift with others? Being a top player is no guarantee of being able to pass on the elixir to the next generation. The great Jack Hobbs, for instance, was a famously hopeless mentor. His was an ability so innate that he simply felt unable to communicate how it all clicked.

Not so with De Villiers, at least not away from the cameras. Look at when Rilee Rossouw joined him at the SCG crease, walking out to bat just a couple of deliveries after his skipper, following the quickfire fall of Faf Du Plessis and Hashim Amla in the 30th over.

Only playing because of injury to JP Duminy, Rossouw had already chalked up five ducks in his first 10 ODI innings. Entering the fray with a solid base set, greatness at the other end and a defeat to India fresh in the mind arguably didn't help the jitters, either.

But the apprentice and his master didn't so much as quiver at the task. Steadily at first, the pair kept the strike ticking over, far better than Amla and Du Plessis, in fact. Pressure was never able to creep in and De Villiers was permanently on hand with a relaxed smile, a high-five, a kind word.

Looking back at the captain's ridiculous 162 not out off 66 balls, it will likely be forgotten that he actually eschewed the limelight while Rossouw began to flourish. Imbued with an implacable sense of security, the rookie had a dream environment in which to feel his way into a World Cup for the first time.

By the time Rossouw departed, caught at the wicket after flashing at Andre Russell for a 39-ball 61, South Africa had 280 on the board with the best part of eight overs to go. This naked statistic may make his knock look like pinch-hitting – a term synonymous with riding one's luck.

Not a bit of it. The left-hander played tidily, particularly through cover and point, upping the tempo intelligently as he went. All the while with De Villiers cast not as his leader but as his pal – the pair cocooned in their own world, chatting in an Afrikaans tongue alien to West Indians and to most earwigging on the stump microphone.

Rossouw is definitely not The Next AB De Villiers, but they do have a bit in common. Both excel at sports other than cricket and both are unobtrusive, likeable characters. Perhaps shared skills and traits make the bond easier to forge.

After the Proteas crumbled against India in Melbourne, suggestions grew louder that they are over-reliant on their captain. Well if they are, it's not just for his run scoring. And how could any team on the planet not look up to a freak like that as a benchmark anyway?

Any supposed reliance on him is inextricably linked to what he can, and does, give to others both on and off the field. His country is even more lucky that De Villiers is of the give-the-man-a-fishing-rod approach to tutoring. The longer he remains a part of the group, the brighter and more sustainable the future looks all round.

All this from one man? Well, just look at that innings again. How can a stand-alone barnstormer like that still be selfless and team-orientated? He'd probably give you the answer if he wasn't so damn modest.

De Villiers' batting talent serves South Africa brilliantly for the present. His ethics, sense of duty and humility is setting them up for years to come.