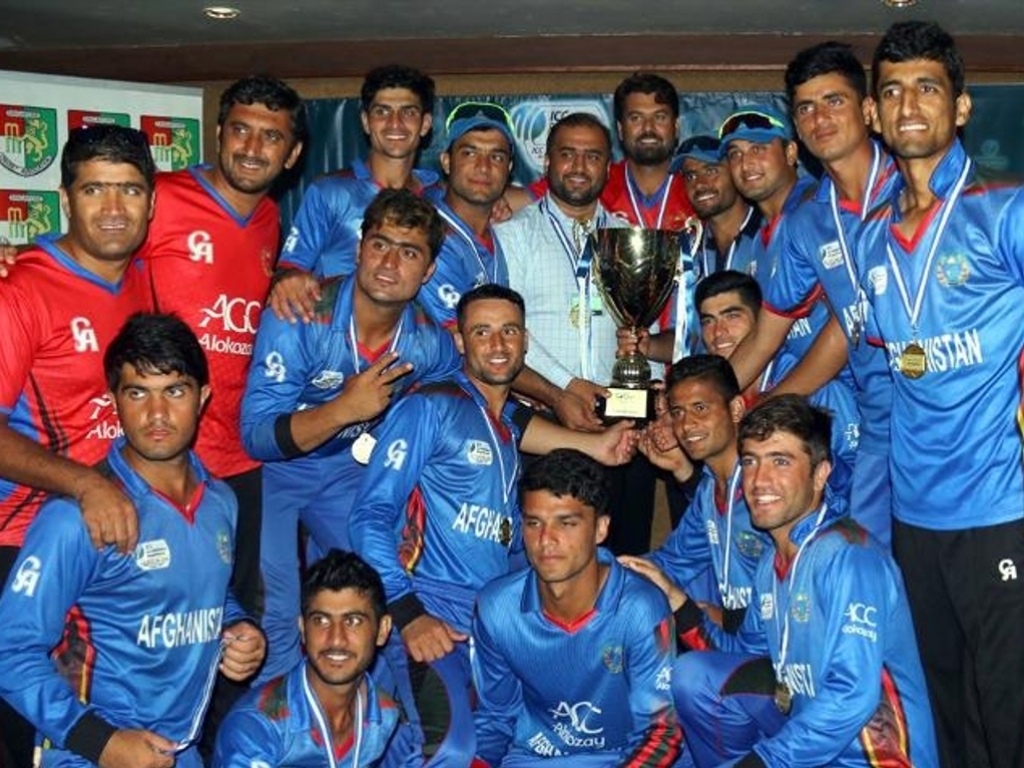 Afghanistan won their sixth and final fixture against Nepal remaining unbeaten through the ICC U19s CWC 2018 Division 1 Qualifiers and booking their place for New Zealand 2018 while Malaysia beat Singapore to make it one a piece in their two head to head contests during the event.

Afghanistan won the toss at the Indian Association and chose to bat and with the rain surprisingly staying away for the duration of the tournament in tropical Singapore, a good batting track would have prompted such a decision.

Obaid and Zadran started things off for Afghanistan and with Obaid departing for 22 (33) at 36-1, Nepal looked to have found their edge and pressured the Afghans and snared two further wickets, leaving the Afghans in a very unfamiliar position of 49-3 within the power play overs. The quick off spinners of Dipendra Singh Airee proving to be the potent choice of bowling option as he dismissed all three batters.

Opener Ibrahim Zadran got through the testing period and with the support of Mahbob coming in at five, looked to have weathered the storm up till Mahbob was sent on his way by Pawan Sharraf for a seemingly docile 10 of 30 balls.

Never having found themselves in such a position of being 5 wickets down before reaching a 100, Afghanistan seemed to have ridden the second wave of pressure well, largely thanks to Zadran who kept going with his sensible approach to batting as he notched up a useful 74 run partnership with keeper Ali Khil.

The Nepalese rallied well towards the end and polished off the Afghan batting line up in the 47th over for 195, left arm spinner, Shahab Alam, playing big part with his 4-30 off 8.5 overs.

Whilst restricting the Afghans to under 200 for the second time in the tournament could be seen as a great positive, Nepal’s failings with the bat came back to haunt them as bowlers Zazi and Mujeeb ran through the top order, putting Nepal on the back foot at 34-5 and effectively taking the game away from them.

Dipendra Singh Airee fought the lone battle for Nepal for his 48 (81) even he and his team mates were denied a brief moment of elation celebrating a half century when he was dismissed by Stanikzai. Nepal all out just over the 40 over mark for 99. Zadran man of the match for his century and helping his team win by 96 runs.

In the cross border matchup between Singapore and Malaysia, Singapore batting first looked to boss the Malaysian bowling attack with an opening stand between Agarwal and Rangarajan of 88 before a reckless run by the pair saw Agarwal depart for 38 (70).

88-1 quickly became 88-2 and the game then went into a pendulum of domination from both sides. Rangarajan’s dismissal for 61 (105) put Malaysia back on top and with heavy hitters Iyer and Uchil also being sent packing cheaply, Malaysia now had their thumb on Singapore’s batting line up as the lower order struggled to make any real impact on the score line .

Singapore staggered to 182 all out in 49.4 overs. Virandeep Singh’s left arm spinner doing the bulk of the damage as he recorded figures of 5-25 of his 10 overs.

Malaysia knew that it was now or never to record their first win of the tournament and finish on a high and acting on that sentiment, Syed Aziz went on the offensive, punishing the ill-disciplined bowling from the Singaporeans and put on a 99 run opening stand with partner Vishvaruben Kumar before edging one to the keeper for his 77 (62).

Kumar departed soon after having incredibly stuck around for 68 deliveries for his 7 runs and at 101 -2 and with the dependable Virandeep Singh at the crease, Malaysia could just about sense a victory.

These aspirations quickly disappeared as Malaysia’s talisman got out LBW to Achar and a cheeky mankad from Rangarajan to dismiss the stubborn Shaunvinder Singh saw Malaysia at 125-5 and with another quick loss of two wickets for an addition of one run were now tinkering at 126-7.

With the core of Malaysia’s batting line up back at the pavilion, a sense of complacency looked to have crept into the Singapore camp as they started to go through the motions, expecting the tail to give in.

Muhammad Solihin and Ammar Zudi however were defiant and as the pair poked around for singles and hit the occasional boundary.

Singapore captain Janak Prakash and his charges seemed to have only realized the urgency of the situation when the pair took the Malaysian score to the 150’s.

By that time, the pair were well settled and a 77 run stand took Malaysia home in the 47th over, earning Malaysia a consolation win and also some last day cheer. Man of the match awarded to Syed Aziz for his cavalier knock which set up Malaysia’s win over their cross border rivals.

At the end of the day however, it was Afghanistan who were celebrating the loudest for their qualification for New Zealand. A much deserved achievement after their dominant showing at the concluded qualifiers. Nepal’s skipper Sandeep Lamicchane voted Player of the Series for his incredible haul of 24 wickets in his 6 matches which included three 5 wicket hauls.

With Kenya (Africa), Afghanistan (Asia) and Canada (Americas) now sealing their spots for New Zealand, Europe and the East Asia Pacific region remain as their upcoming qualifiers will determine the two remaining associate spots for the U19s World Cup.