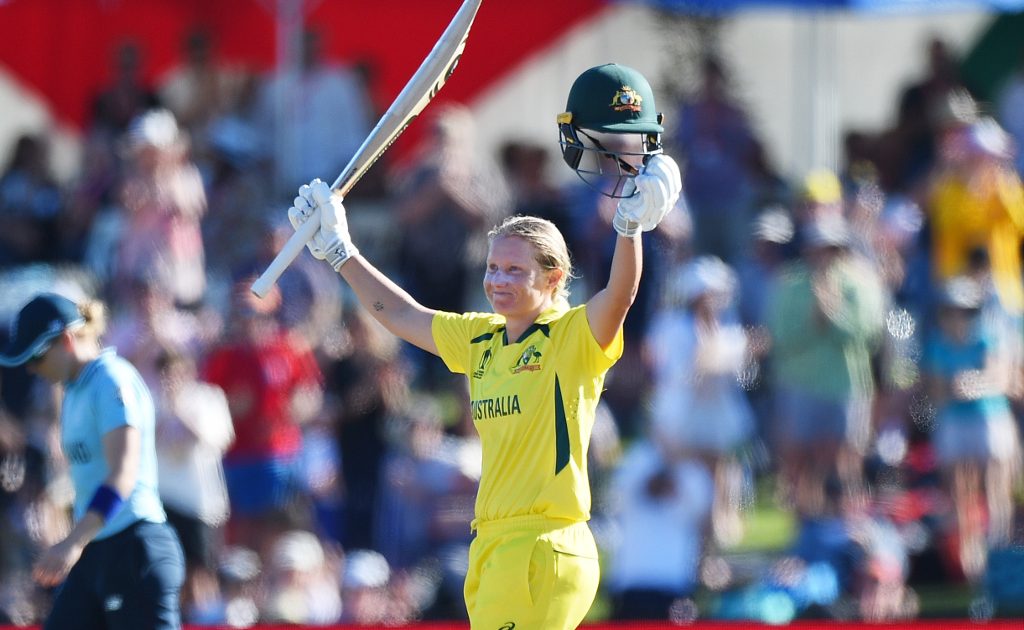 Australia’s Alyssa Healy struck a sensational record-breaking century as her side powered to a 71-run victory over England to win the Women’s World Cup.

The wicketkeeper put on a batting masterclass on her way to hitting the highest ever individual score in an ODI World Cup final, overtaking fellow Australian Adam Gilchrist’s 149 against Sri Lanka in 2007.

Healy hit 170 from 138 deliveries, putting her side in a dominant position before she was eventually out, stumped by Amy Jones off Anya Shrubsole, after surviving being dropped by Danni Wyatt on 41, as Australia made 356.

England struggled to form partnerships in reply, despite an excellent century from Nat Sciver as they made 275 all out.

The 29-year-old had already scored a ton against Australia in their opening match of the tournament, which England also lost, and did so again in the final in Christchurch, including the only six of the match.

Heather Knight’s side started their mammoth chase positively, and scored faster than their opponents at the start of the innings, reaching 59 for two after 10 overs while Australia had been 37 without loss.

Sciver survived two reviews after being brought to the crease by the early loss of Danni Wyatt and the wicket of Tammy Beaumont, as she finished the tournament without being dismissed against the World Cup winners, having scored 257 runs in total.

The all-rounder alongside her captain looked to rebuild, before Knight was trapped lbw by Alana King to leave England 86 for three.

Amy Jones and Sophia Dunkley were the next two batters to partner Sciver, scoring 20 and 23 respectively, including a 50 partnership, but it was not enough to threaten Australia.

England’s highest partnership came with Sciver alongside Charlie Dean at the back end of the innings, where they put on 65 for the ninth wicket, but it was too little too late.

England’s start to the tournament was plagued by fielding errors, which proved costly during their group-stage defeat to South Africa, and improved as the competition went on, but these mistakes crept back into their final performance.

In the first innings, Healy and opening partner Rachael Haynes were both dropped in the same over, Haynes by Wyatt at backward point, and Healy by Sciver at midwicket off the bowling of Kate Cross.

When England eventually managed to take their first wicket, with the score already at 160, Haynes top-edging a ball from Sophie Ecclestone to Beaumont, Australia’s run rate did not slow with the introduction of Beth Mooney, who was promoted to number five, hitting 62 from 47.

The wickets eventually began to fall, including captain Meg Lanning and Mooney in successive balls, but it was too late to have a meaningful impact on the total, with Shrubsole finishing as the pick of the bowlers with three wickets for 46 from her 10 overs.

The result leaves Australia as holders of the women’s Ashes, T20 and 50-over World Cup titles.