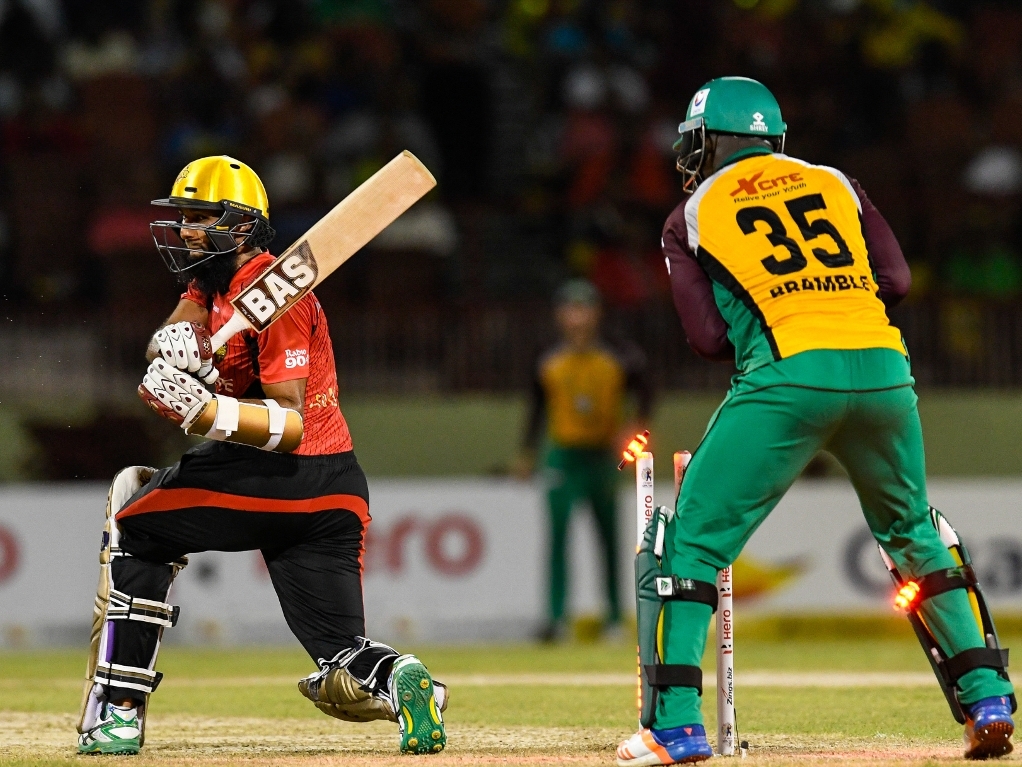 The Trinbago Knight Riders ended the unbeaten run of the Guyana Amazon Warriors with a seven run victory in the Caribbean Premier League on Sunday night.

A classy half-century from Hashim Amla and some big hitting at the back end of the innings from Dwayne Bravo took the Knight Riders to 151 for 4 wickets, the second highest total ever made on this ground in a CPL match.

To win this match the Amazon Warriors would have to rewrite the Providence record books and they ended up pretty close to doing just that.

New Zealander Anton Devcich, brought into the side for the rested Brendon McCullum, opened the bowling with his off-spin and he picked up two early wickets and that put the Knight Riders in charge, but the Amazon Warriors fought right to the end.

Amla was the first visiting batsman to come to terms with this Providence surface from the beginning of their innings. His languid batting style, where he plays the ball late, was ideally suited to these conditions and he combined excellent timing with good placement to top score for TKR with 64 from 54 balls.

The highest score batting first at Providence in the first two matches this year was just 108, the Knight Riders went past that in the 17th over of their innings when Amla drove a ball from Sohail Tanvir for four over mid-off.

Just at the point where it looked like Amla would bat through the Trinbago innings, he attempted a swish across the line to a ball from Adam Zampa and was bowled. That wicket was Zampa’s 10th of Hero CPL 2016, the most by any bowler so far this season.

The real fireworks came once Amla was dismissed. Dwayne Bravo walked out to bat and smashed Zampa over mid-wicket for a Maximum from the first ball he faced. He made it two sixes in two balls when he hit Zampa down the ground. It went very high and it was nearly caught on the boundary edge by Martin Guptill.

Bravo managed a third six before he was bowled by Rayad Emrit trying to go for a fourth. He made 25 from just eight balls to help take his team to a daunting 151-4. The Guyana Amazon Warriors would have to put together the highest CPL chase on this ground to secure victory.

That chase got off to the worst possible start when Devcich dismissed Dwayne Smith before a single run had been added. Things got markedly better once Chris Lynn struck three fours off Kevon Cooper in the second over of the innings.

The Australian has been in superb form so far this tournament and he cruised to 20 in double quick time but it didn’t last.

Lynn bottom edged a ball from Sulieman Benn but Denesh Ramdin could not hang on to the stiff chance. It did not prove too costly though as Lynn was dismissed in the very next over when he attempted to hit Devcich over mid-wicket and picked out Cooper in the deep.

Guptill played a patient innings but the required rate continued to climb, especially once Sunil Narine was introduced into the attack. The Amazon Warriors' captain finished on 50 from 40 balls, the highest score for his team.

When Guptill fell it seemed that it would be an easy win for the Knight Riders, but some late order hitting gave them a real scare, it wasn't to be for the Guyana side though.

The Amazon Warriors remain top of the CPL standings and after their great start they are well placed to make the knockout stages, but this Trinbago performance showed they are not invincible.