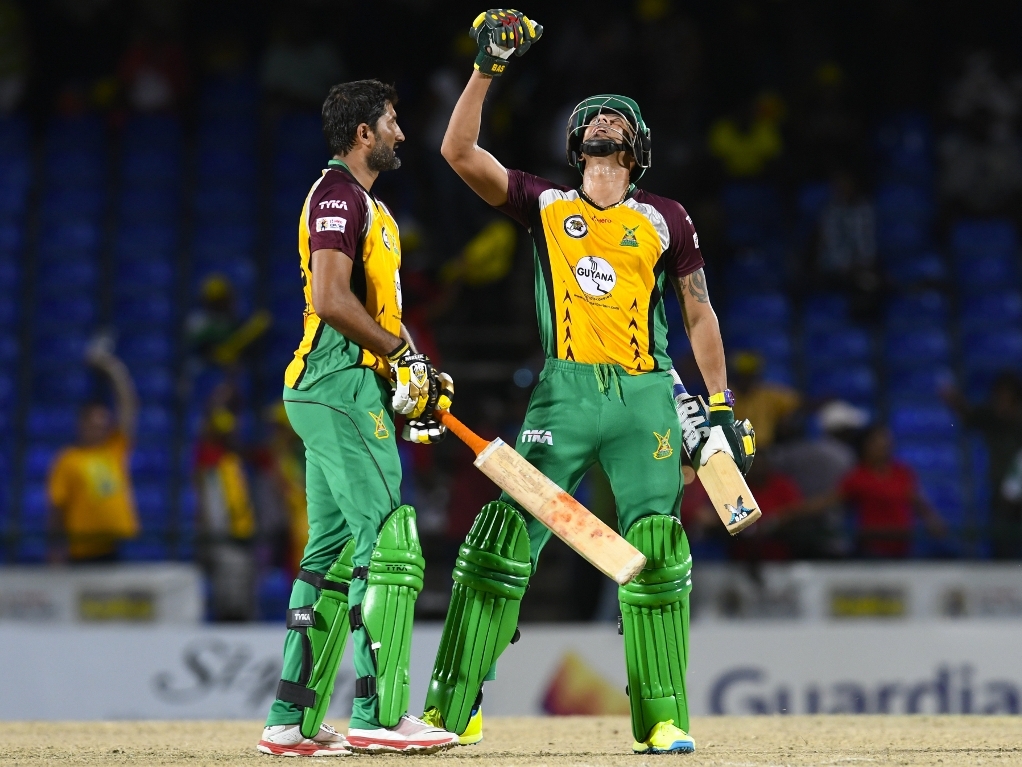 The Guyana Amazon Warriors have secured a place in the Caribbean Premier League (CPL) final with a dramatic win over the Jamaica Tallawahs in the first playoff match at Warner Park, St Kitts.

Three wickets from Rayad Emrit and two for Sohail Tanvir restricted the Tallawahs to 146-8 from their 20 overs.

Rain arrived to hold up proceedings but when they did get back under way the Amazon Warriors chased down the target with just two balls to spare with Australia’s Chris Lynn top-scoring for the Guyanese side.

Having been put into to bat the Tallawahs struggled to find a partnership that could hold their innings together.

Chadwick Walton and Chris Gayle got the team off to a steady start in the batting PowerPlay. They put on 33 runs for the first wicket before Walton was out for 16, caught in the covers by Jason Mohammad off the bowling of Rayad Emrit.

Gayle was clearly intent on batting deep into the Tallawahs’ innings and he was going at under a run a ball throughout his innings. He had made 33 from 36 balls when he inside edged onto his stumps.

The Tallawahs kept trying hard to get the run rate up, but that resulted in wickets falling at regular intervals. Kumar Sangakkara departed for a run a ball 20 when he attempted to slog Adam Zampa over mid-wicket and found the fielder. Getting out once set was the story of the Tallawahs’ innings.

Rovman Powell and Andre Russell hit sixes before they both fell within six balls of each other leaving the Tallawahs 123-5 with three overs to go.

With the big hitters gone there was little chance of getting to a truly impressive total, but for a while it looked like it would be enough.

When the Amazon Warriors chase got under way that target looked well within reach, Nic Maddinson hit two fours and a six on his way to 14 from nine balls. He could not cause any real damage though, Kesrick Williams dismissing him with a brilliant catch off his own bowling, one of four wickets for the seamer.

A lengthy rain delay kept the players from the field, when they resumed Lynn carried on his excellent form in this year’s CPL passing 400 runs for the season, becoming the leading run scorer in this year’s tournament in the process.

Some canny bowling by the Tallawahs kept the Amazon Warriors scoring rate in check, with Imad Wasim particularly impressive as he conceded just 21 runs from his 3.4 overs.

Lynn looked to be guiding his side home however he fell for 49 from 47 balls, he hit a big maximum off Williams at the start of the seventh over but he fell three balls later trying to repeat the trick.

Things looked bleak for the Amazon Warriors when Lynn got out but some late order hitting from Tanvir and Emrit took their side home.

The win means that the Amazon Warriors have a place in the Hero CPL final which takes place on Sunday, 7 August. Despite losing this match the Tallawahs still have one more chance to reach the final. They will play the winner of the match between St Lucia Zouks and Trinbago Knight Riders which will take place tomorrow.