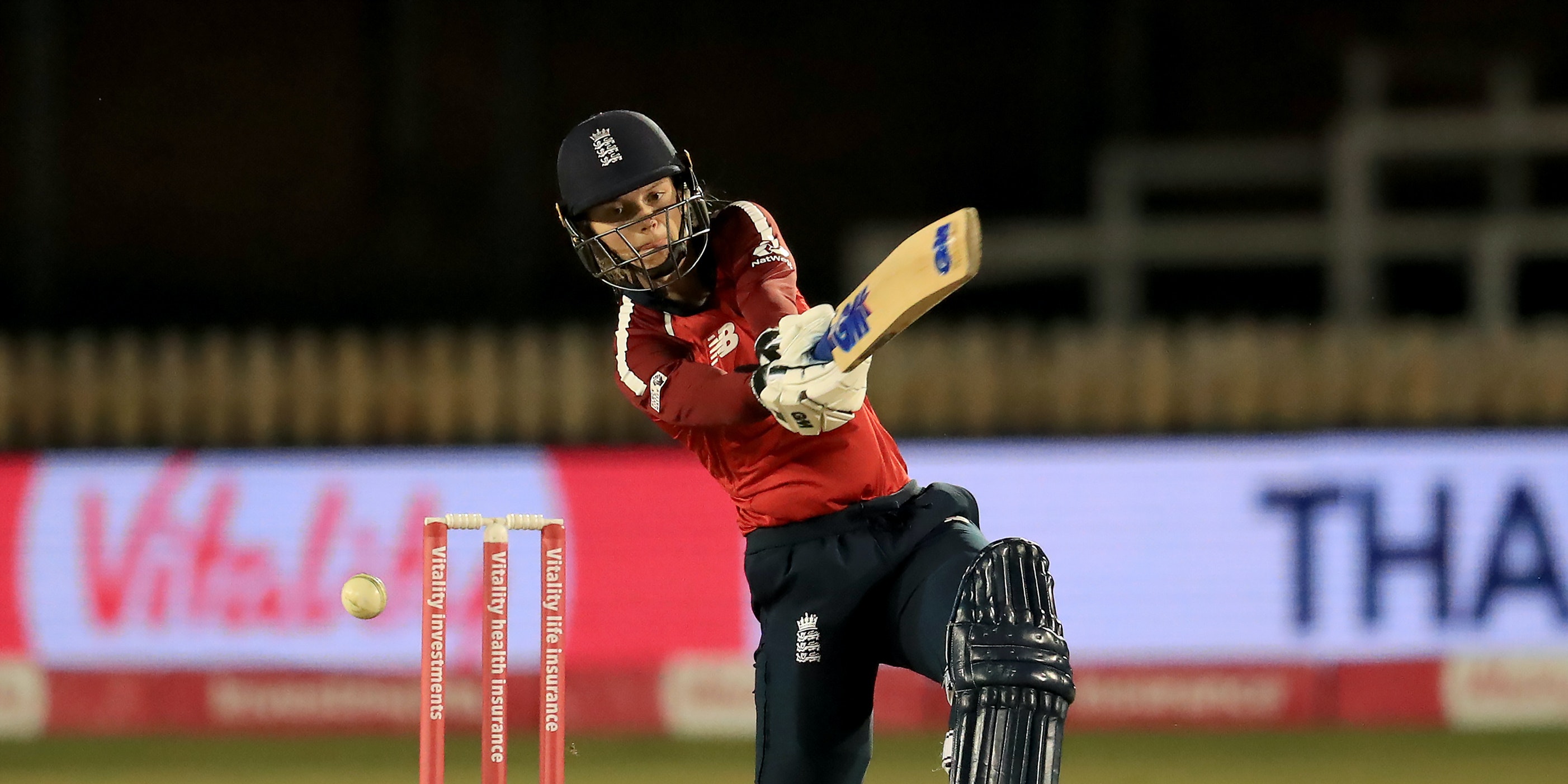 Amy Jones ended a lean run of form with a sparkling 55 from 37 balls as England Women inched closer to a clean sweep of the West Indies in their Vitality Twenty20 series with a 44-run win at Derby’s Incora Ground.

Jones’ first fifty in 13 international innings, plus captain Heather Knight’s 42, helped England recover from 45 for three to post 166 for six after they had won the toss and batted first for the fourth time in as many matches.

If England’s highest score of the series was not daunting enough, the Windies lost free-scoring Deandra Dottin to the third ball of their reply, and although the tourists did not throw in the towel they were once more heavily beaten under lights to fall 4-0 down ahead of Wednesday’s finale.

Sarah Glenn took her wickets tally to seven in four matches with two for 15, while Katherine Brunt followed up an important cameo with the bat with two scalps. England, though, leaked 15 wides, while Jones blotted her copybook by dropping a couple of steeplers behind the stumps.

However, Jones produced arguably the finest innings from either side so far in the series after being dropped on two. Thereafter she used her power and finesse to record five fours and two sixes as she and Knight launched a spectacular rally in the middle of the innings.

Jones’ knock was her first 50-plus score in England in T20s and her first since moving from opener to the middle order following a miserable run at the sprint-format World Cup earlier this year, where her highest score was 23.

Since then Tammy Beaumont and Danni Wyatt have been charged with getting England off to a flyer but the latter’s underwhelming series continued, cramped for room and nicking off to Aaliyah Alleyne – one of three changes to the Windies line-up.

The seamer made further inroads as Nat Sciver followed up her match-winning 82 on Saturday with six after slashing at a wide one.

The Windies fed Beaumont’s cut shot but the opener missed a reverse sweep from Karishma Ramharack’s first ball of the series and was lbw for 27, while matters could have worsened for England as Lee-Ann Kirby shelled a straightforward catch after Jones had slammed Stafanie Taylor’s looping full toss to midwicket.

The tourists’ disciplined bowling had restricted England to 54 for three at halfway but Knight and Jones countered in jaw-dropping fashion by taking 48 runs in 15 balls at one stage. Knight released the handbrake with a muscular slog sweep for six off Shabika Gajnabi, while Ramharack’s off-spin and Shamilia Connell’s medium-pace was taken the distance by Jones.

Attempting another monstrous hit, Knight edged Connell behind to end an entertaining 65-run stand alongside Jones, while Sophia Dunkley – in for Fran Wilson in England’s only change – lasted only one ball in her first international innings in 18 months, clubbing a return catch to Hayley Matthews.

Jones showed her strength and inventiveness as a drive and reverse sweep got back-to-back fours off Matthews as she brought up her half-century in only 30 balls, but her innings came to a conclusion in unfortunate circumstances in the final over, sent back to the non-striker’s end by partner Brunt, who had been caught off a no-ball.

Brunt’s might through the off-side saw her finish unbeaten on 25 from 17 deliveries and she made a near-instant impact with the ball as the dangerous Dottin had her stumps splayed after missing a pull.

Having amassed 170 runs in three innings before Monday, getting Dottin in the first over seemed decisive, even so early into the Windies’ chase.

Fellow opener Kirby was beaten for pace and cleaned up by Sciver and though Shemaine Campbelle was reprieved after Jones spilled the first of two towering top-edges on the night, the Windies batter was on her way back for 11 after being trapped in front by Sophie Ecclestone, a not out decision overturned on review.

While England were erring in line, the one-way traffic continued as Taylor had her off-stump knocked back by Glenn, and with the Windies’ captain’s departure went any hope of an unlikely victory.

Chedean Nation produced a breezy 30 as the Windies refused to wilt but there was never any hope of a fightback as the tourists finished on 122 for nine.