Anderson ruled out of second Ashes Test with calf injury 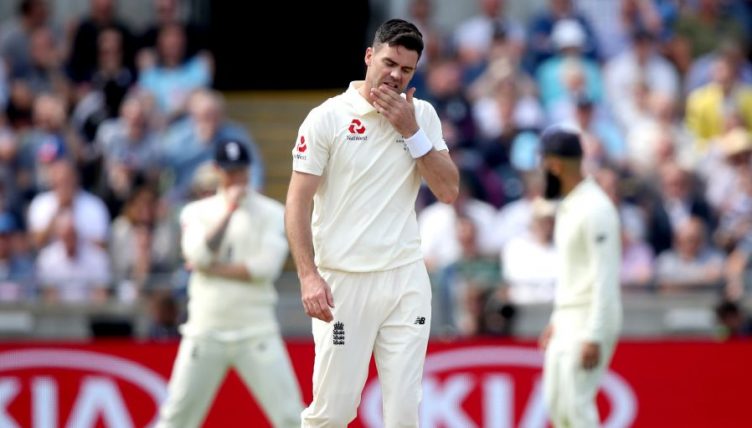 James Anderson has been ruled out of the second Ashes Test at Lord’s with a recurrence of his calf injury.

England’s all-time leading wicket-taker was passed fit for the opener at Edgbaston but pulled up after bowling just four overs on the first morning.

After that he was restricted to a couple of short batting efforts at number 11 in England’s crushing 251-run defeat and a couple of tentative workouts on the field during intervals.

England remain hopeful of Anderson returning at some point during the last three matches of the series.

The ECB confirmed the not exactly unexpected news on Tuesday morning.

“The MRI confirmed that Anderson has suffered a calf injury,” the statement read.

“As a result of the injury, he will commence a rehabilitation programme working with the England and Lancashire medical teams.

“Anderson will miss the second Test match, which starts at Lord’s on Wednesday August 14. He will be reassessed on an ongoing basis regarding his availability for the rest of Specsavers Ashes series.”

Anderson’s absence offers a way into the England side for Jofra Archer, as long as he can prove his own fitness having been out of action since his memorable contribution to the World Cup final. Archer will play a three-day second XI game for Sussex this week in a bid to prove his fitness.

“He went through every medical check and it was a unanimous decision from all parties,” Root said. “We went about it how you normally would. It’s one of those freak things, he pulled up in the middle of a game.

“It’s easy in hindsight. Sometimes things go against you and you have to find a way of getting through the game. It was a fantastic effort considering we were a bowler down and we have to not dwell on it.”

In addition to the forced replacement of Anderson, reports suggest England are also considering bringing in Jack Leach for Moeen Ali after the off-spinner failed to exploit favourable conditions in Australia’s second innings and suffered two further failures with the bat.