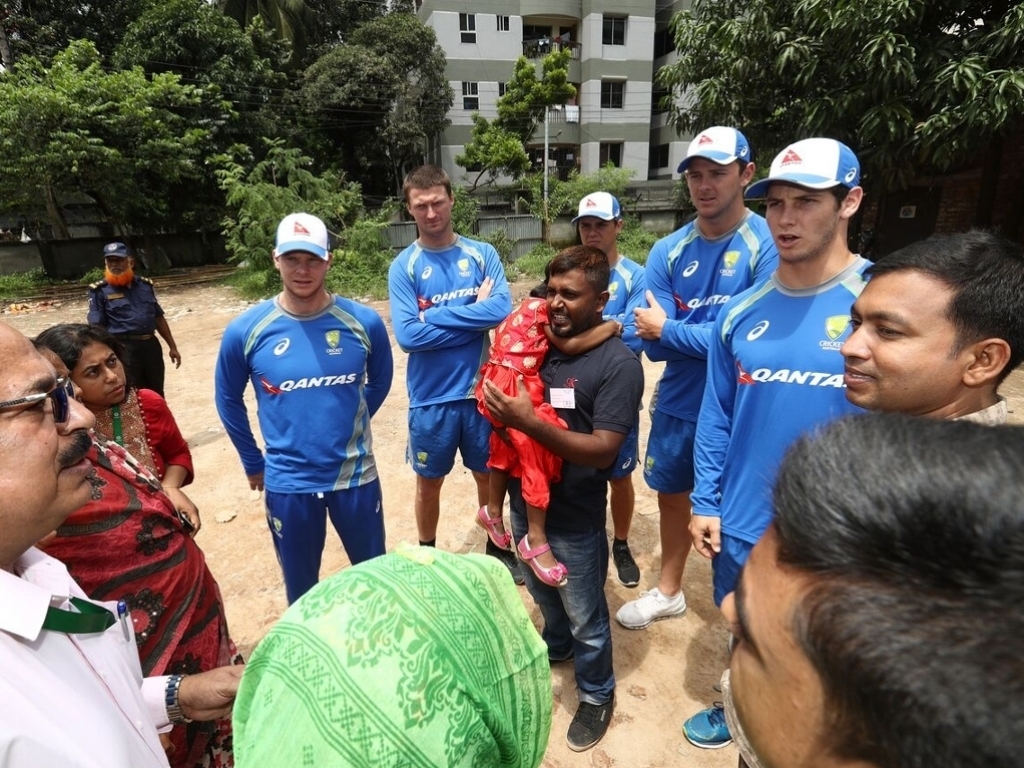 Australian cricketers visited Oxfam in Bangladesh to meet with families from Satolla slum in Dhaka, Bangladesh, where they learned about the living conditions of residents and met domestic workers who are part of Oxfam’s Urban Resilience Program.

The program is supported by the Australian Government, generous donations from the Australian public and other international grants. Oxfam has worked with six partners to implement the program as well as local and national governments in Bangladesh.

The players took time out from their preparations for the first Test of the Qantas Tour of Bangladesh, which begins on Sunday in Dhaka, to hear from locals about their struggles to access decent work, as well as water and sanitation services, and see firsthand how Oxfam in Bangladesh is working to counter these issues.

Speaking on the experience Usman Khawaja said:
“It was quite an experience here today. Some of the kids and adults had amazing stories and have experienced really tough times growing up which although you expect in this part of the world, it really sinks in when you hear it firsthand.”

Oxfam Australia’s Chief Executive Helen Szoke said:
“It’s fantastic that Australia’s best male cricketers have taken time out of their busy tour in Bangladesh to visit an Oxfam program generously supported by the Australian public and Government, to get a better idea of how we help people to tackle poverty,” Dr Szoke said.

“The projects they’re visiting showcase the innovation behind a drinking water ‘ATM’ used by the community, as well as support given to domestic workers, like household cooks, cleaners and carers, to ensure they are properly paid and fairly treated.”

ALSO READ: Maxwell: Using your bat against Tigers is key

Players were given the opportunity to hear the life stories of three of the workers and received a rare insight into the challenges they face on a daily basis working in an urban slum.