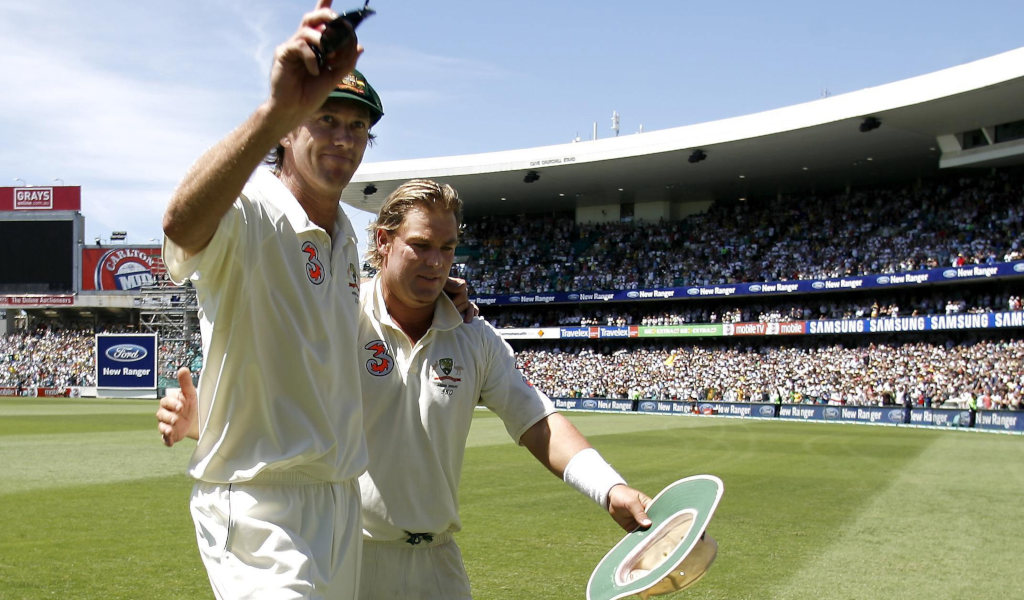 Glenn McGrath said he is “absolutely devastated” following the death of Shane Warne as Australia players past and present paid tribute to the cricketing great.

Tributes have flooded in for Warne after the former Australia leg-spinner died of a suspected heart attack at the age of 52.

Warne was the first player to take 700 Test wickets and his partnership with fast bowler McGrath will be remembered as one of the greatest in the game’s history.

Warne and McGrath played 104 Tests together taking an extraordinary 1,011 wickets at an average of 23.13.

“Just absolutely devastated today,” said McGrath, 52, in a message posted to Instagram. “Warnie was larger than life. I thought nothing could ever happen to him. He lived more in his life than most people would live in 20.

“He was the ultimate competitor. He thought the game was never lost, that he could turn it around and bring us to victory, which he did so many times. I think he lived his life the same way. There seemed to be never a dull moment.”

“He was a great mate and a loving father. Rest In Peace my good mate, there’ll never again be anyone like you.”

A force of nature

Warne’s record of 708 wickets in 145 Tests was bettered only by contemporary rival Muttiah Muralitharan.

A pioneer who revived legbreak bowling amid a downturn in the decades before he burst on to the scene in 1992, Warne was revered by many across a glittering 15-year international career.

Australia Test captain Pat Cummins, currently touring Pakistan, said in a video posted on Cricket Australia’s Twitter feed: “Warnie was an all-time great, a once-in-a-century type of cricketer and his record will live on forever.

“We all grew up watching Warnie, idolising him, we all had posters on our wall, had his earrings. We loved so much his showmanship, his charisma, his tactics. He just willed himself and his team to win games for Australia.

“So many guys in this squad still hold him as a hero, their all-time favourite player. The loss we’re all trying to wrap our heads around is huge. The game was never the same after Warnie emerged and the game will never be the same after his passing. Rest in peace, King.”

With an instrumental Warne in their ranks, Australia won six Ashes series in a row and were the dominant force in cricket for more than a decade from the mid-1990s in both Tests and one-day internationals.

He wrote on Twitter: “Numb. The highlight of my cricketing career was to keep wicket to Warnie.

“Best seat in the house to watch the maestro at work. Have often felt a tad selfish, that Heals and I pretty much exclusively are the only ones who had that thrill and pleasure at Test level. Rip Warnie.”

Confirmation of Warne’s death came just hours after he posted a tweet on Twitter offering his condolences to the family of Rod Marsh, the former Australia wicketkeeper who died on Friday morning.

Former Australia captain Steve Waugh posted: “So many memories and moments that will never be forgotten. It was a privilege and a pleasure to play alongside you. My thoughts and condolences are with the Warne family. R.I.P. Warnie.”

Australia opener David Warner said in a message on his social channels: “Two legends of our game have left us too soon. I’m lost for words, and this is extremely sad.

“My thoughts and prayers go out to the Marsh and Warne family. I just can not believe it. #rip, you will both be missed.”

Watson tweeted: “I am numb!!! My hero, my mentor, my great friend, Shane Warne is no longer with us. Warnie, the impact you had on this great game and everyone around it is immeasurable. Thank you for being so bloody good to me. I am going to miss you so much. Rest In Peace SK.”

Ex-Australia batsman Mark Waugh said his old team-mate Warne was the “ultimate entertainer” both on and off the cricket field, while another former colleague, Jason Gillespie, was another left “devastated” by the news.

Waugh, who played 128 Tests and 244 ODIs for Australia between 1991 and 2002, wrote on Twitter: “This just unfathomable to lose another great of our cricket family. Warnie was the ultimate entertainer on and off the field, never a dull moment who lived life to the fullest. Deepest condolences to his loved ones. RIP mate.”

Former Australia batter and head coach Darren Lehmann described Warne as a “generous, fun-loving superstar”, while another ex-team-mate, Brett Lee, hailed him as the “rock star” of the game.

Lehmann wrote on Twitter: “The last 24 hours we have lost two legends and I am devastated.

“My thoughts and condolences are with all the Warne family and we send our love to Simone, Brooke, Jackson and Summer at this time.

“Shane was the most generous, fun-loving superstar of our game and I was lucky enough to play and tour with him.

“He was always charismatic caring and true friend. Will miss ya King, RIP.”

Former Australia quick Lee tweeted: “Can’t believe it. The greatest bowler to play the game ever ! The RockStar of cricket ! Gone too soon. RIP mate.”

Cricket Australia chief executive Nick Hockley added in a statement: “Shane was one of the most talented and charismatic cricketers we have ever witnessed. He loved cricket, had an extraordinarily astute understanding of the game and his influence and legacy will last for as long as it is played.

“We are in a state of complete shock at his sudden passing and our thoughts are with his family, his many friends and the legion of fans from all over the world who loved and admired Warnie for his unbelievable bowling skills, his humour, warmth and engaging personality.”