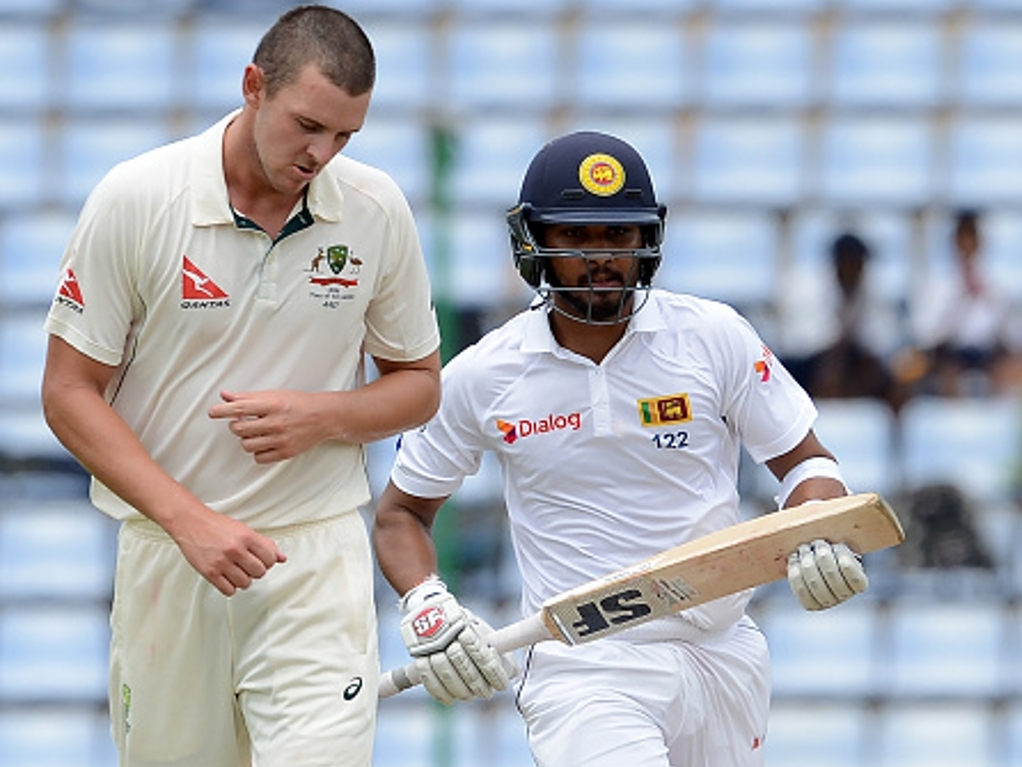 The mental fortitude of Australian Cricket teams has traditionally been a point of great strength and one wouldn't feel they needed any advantage over Sri Lanka.

Australian fast bowler Josh Hazlewood believes they have gained the mental edge, though, after day one of the first Test in Sri Lanka.

Skipper Steve Smith took possession of the Test championship mace in a private ceremony at a Kandy hotel, with rumours circulating that Sri Lanka Cricket had requested the ceremony be a closed affair, so as not to demoralize any of the Sri Lanka squad.

Australia and Sri Lanka are on very different trajectories in terms of world cricket.

Sri Lanka have had to cope with the retirements of Mahela Jayawaredene, Kumar Sangakkara and Tillakaratne Dilshan, turning a team of perennial contenders into a group of also-rans.

Their opponents are looking to rival Australian teams of the late 90's and early 2000's in terms of success as Steve Smith comes into his own as an international captain and his squad blossom into a formidable unit.

Hazlewood believes the advantage the Baggy Green's have gained on day one will help them on surfaces that are less friendly.

Speaking after play in Kandy, Hazlewood said: "Anything you can get on the opposition is crucial,

"If you can get it straight up on the first morning of a Test series, and get on top of a few of their top-order batters, it does open up some scars, hopefully, for the back end of the tour on some not-so-friendly wickets for us quicks.

"We don't know too much about these guys, we haven't played them a lot, especially our bowlers, so we've worked out a few little things here and there in that innings, and we'll look to keep on top of them with those plans throughout the whole series."

Pallekele was always likely to be the place where the quicks got some assistance, Hazlewood remarked: "A few of the guys who were here on the last series mentioned that if the quicks are going to get anything out of it, it's going to be this Test, especially with the new ball,

"We made the most of that, and hopefully, we do again in the second innings. I was happy to bowl turning up today, it was a good toss to lose, see how that wicket was going to play. I thought if we bowled well, which we did, we'd get a few wickets early.

"It is [going to get harder], hopefully, we enjoyed that as much as we could.

"The next two wickets are probably going to suit the spinners and then Colombo could be quite flat, so it's going to be hard work, but we've trained on some flat wickets in Colombo when we got here and tried a few different things here and there, so we're as prepared as we can be.

"We may have to work on a few other things, and I think reverse swing will be a huge factor as well."

Australia had to bowl less than 35 overs to roll the hosts over but Hazlewood feels they showed good patience: "I thought we were quite patient, and just bowled the usual great lines and lengths,

"Mitch Starc was probably not at his best, but still very lethal, no matter when he bowls, and I think the spinners bowled beautifully on that wicket, it did offer them a bit of up-and-down bounce.

"It swung a little bit more in our second spells than the first. I think it's just that hardness, a couple balls nipped here and there, the wicket was a little bit tacky, spikes were going in quite easily, and then, with the spin, I don't think it spun too much. It was just inconsistent, and that did the damage.

"A couple did shoot through for a day-one wicket, so that'll be interesting the longer the game goes. The spinners are going to come into it a lot more, and they've got some quality spinners, so first-innings runs are going to be crucial for us."