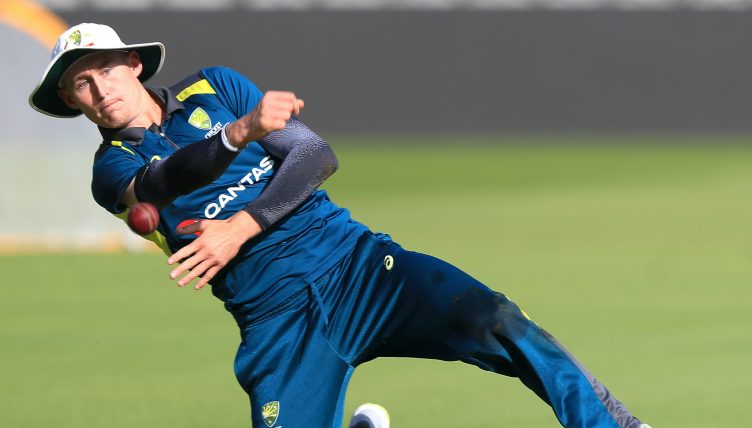 Marnus Labuschagne staked a claim for a spot in Australia’s Twenty20 side with a stunning century while wicketkeeper Alex Carey provided a reminder of his batting exploits at the Ageas Bowl.

Labuschagne, who has established himself as a key figure in red-ball cricket, is yet to play for his country in the shortest format, but scored 100 off 51 balls in the second of two intra-squad matches on Tuesday.

He put on 181 with Carey, who struck 107 to follow up a half-century in the first match between the Finch XI and Cummins XI.

After wicketkeeper rival Matthew Wade had donned the gloves for the first time on the tour earlier in the day and scored a fifty as well, it was a timely innings for the man who recently had the vice-captaincy taken off him.

Pat Cummins decided to open with spin in the first intra-squad match and it proved a wise move when David Warner was bowled for a golden duck by Ashton Agar.

The same bowled was pulled for six by Australia’s captain and he reached fifty off 29 balls with a single off Adam Zampa.

It was an eventful over, with Wade reaching his half-century with a sweep for four and bringing up the hundred partnership before Zampa had him caught by Abbott following a 33-ball 50.

Agar removed Finch for 53 when he returned and dismissed Mitchell Marsh on his way to three for 26 as the Cummins XI fought back to restrict their opponents to 166 for eight.

It would prove too many, with Smith failing for the second game in a row, out for one after facing only two balls.

Josh Philippe, Marcus Stoinis and Glenn Maxwell made starts, but fell victim to Marsh and Andrew Tye who both picked up two wickets apiece.

Wicketkeeper Carey stuck around and yet used 43 balls to score 50 not out as the Cummins XI lost by 23 runs after ending on 143 for six.

Riley Meredith sat out the second match due to soreness while Warner and Marsh swapped with Carey and Maxwell and Josh Hazlewood played for Finch XI, who again batted first.

Finch succumbed to Agar for five under the floodlights at the Ageas Bowl but this brought Carey back to the crease and he demonstrated his improved intent with a reverse sweep for four off his first ball.

Both the wicketkeeper and opener Labuschagne made the most of second lives, with the latter racing to fifty off 27 balls.

Carey was not far behind, achieving the feat just six balls more slowly, but the real fireworks were still to come with Kane Richardson’s second over smashed for 20.

Labuschagne moved into the nineties with back-to-back fours and another boundary, via a sweep off Zampa, got him to his century with a strike rate of 200.

The spinner dismissed him next ball and yet there was still time for Carey to take 17 off Cummins in the penultimate over of the innings to reach his hundred from 56 balls.

It ensured the Finch XI made 229 for three and runs initially continued to flow with Smith, who had been promoted to open, flicking Hazlewood away for a maximum early on.

He made a rapid 41 before Nathan Lyon ended his 21-ball stay, his longest at the crease since he landed in England.

Any hopes of an exciting chase were thwarted by more impressive bowling from Tye, who dismissed Marsh and Wade in successive balls.

Warner survived the hat-trick ball but it was a short reprieve with Lyon finding the edge to send him back to the pavilion for one – meaning he faced just six balls in the final two intra-squad matches.

Successive sixes for Stoinis off Sams showed he had not lost hope and he struck another to spoil Tye’s third over.

But when he was caught by Carey off Hazlewood after a 37-ball 68, it was almost time for the Cummins XI to give up the ghost and Lyon finished with four for 29 to help restrict the opposition to 197 for nine.

Australia are next in action on Friday at the same venue in the first of three T20 internationals against England.