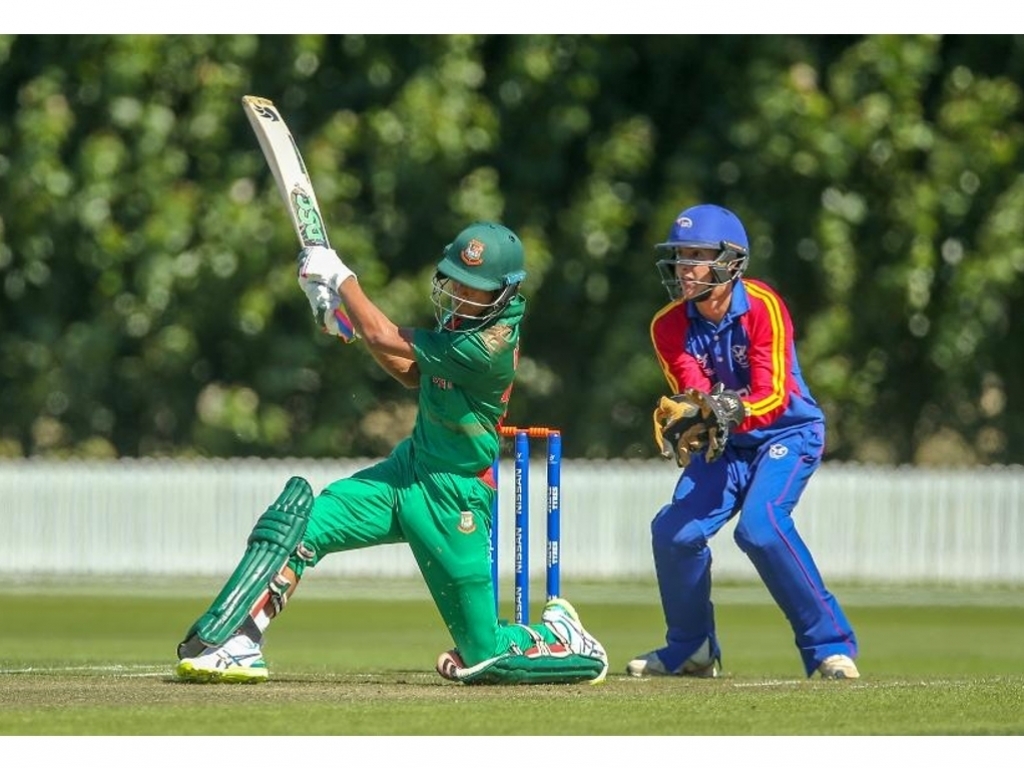 After Bangladesh posted 190/4 thanks to half-centuries from Mohammad Naim and Saif Hassan the result was largely beyond doubt, hard though Namibia fought in their U19WC opener.

With the fixture reduced to 20 overs a side, and with Namibia having won the toss and chosen to bowl, a fast start was imperative for the Asian side, and they got it thanks Pinak Ghosh, who dominated the early scoring, making 26 of Bangladesh’s initial 33, and striking four fours. His departure brought skipper Saif Hassan to the crease, and he provided a captain’s innings, smashing 84 off 48 balls, before falling on the last ball of the 20 overs.

Opener Mohammad Naim’s 60 was also eye-catching, containing eight fours and a six, and the pair’s 97-run stand laid the platform from which Saif launched. He struck all five of his sixes in the four and a half overs which followed Naim’s dismissal, including three in the last over alone, as Bangladesh plundered 55 runs from the last four overs.

Up until the Bangladesh captain’s onslaught, Namibia might have been satisfied with their work. Though they’d lacked potency, their bowling attack had largely kept Bangladesh quiet, and if they could only have gotten Saif out might have harboured hopes of restricting their opponents to something around 160. But they didn’t, and the total ended up 30 runs past that.

The suspicion that Bangladesh’s total would be a stretch too far for Namibia was confirmed when the African side slid to 12/4. Most of the damage was done by Qazi Onik who claimed superb figures of 2/14 from his four overs, and left onlookers wondering if a record victory could be on the cards.

That the history books didn’t need to be consulted was thanks Eben van Wyk and Nicol Loftie-Eaton, whose partnership of 69 allowed Namibia to at least regain some respectability, if not threaten to chase down Bangladesh’s total. The former registered a half-century, all the more admirable for the hopeless circumstances in which it came, and helped his team reach 103/6.

But the day’s real story was Bangladesh’s accomplished performance, putting away a spirited side with ease, and setting down a marker for other teams to take notice of.