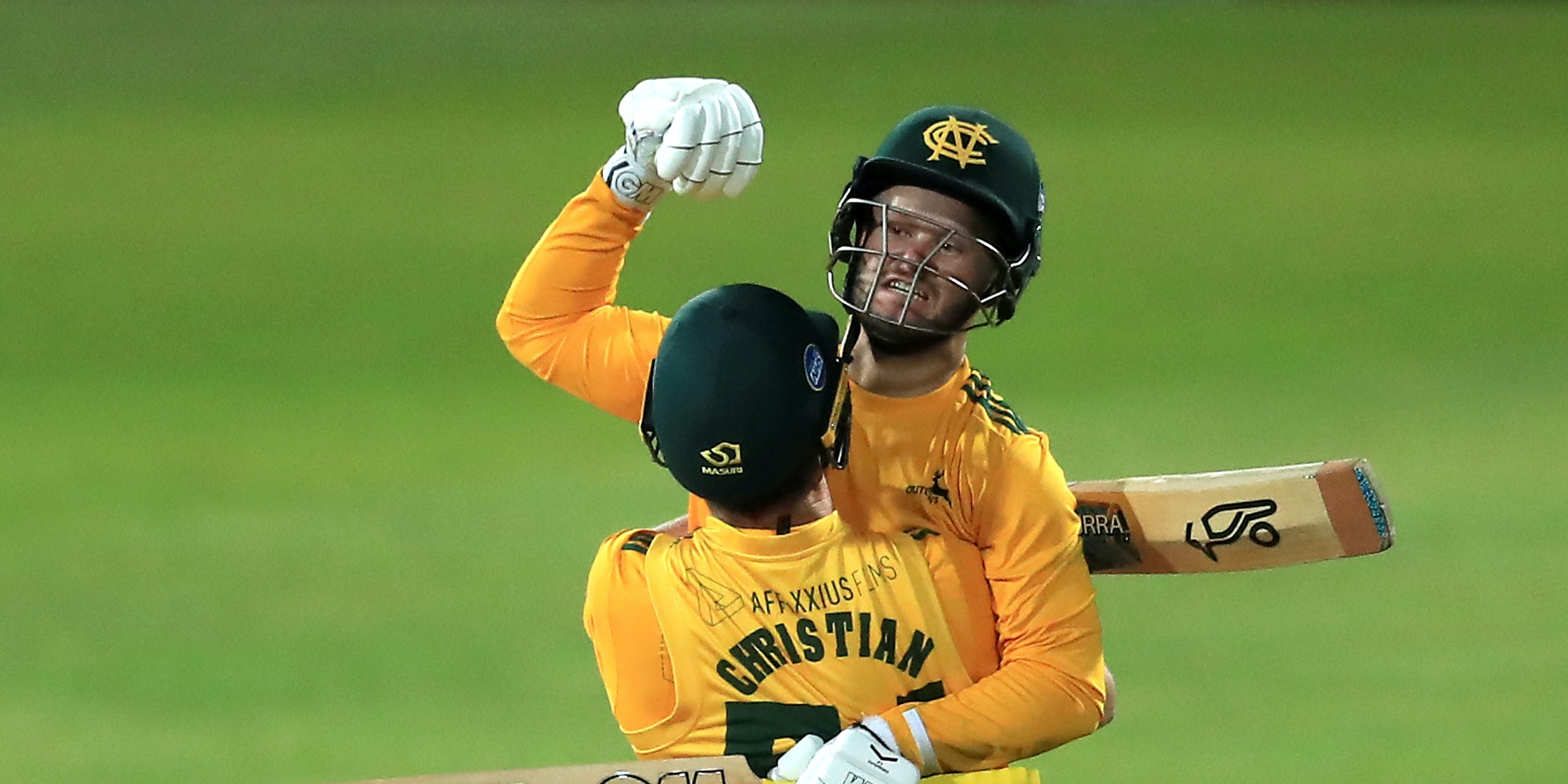 Ben Duckett and Dan Christian turned in match-winning performances as Nottinghamshire brought down the curtain on the cricket season by beating Surrey to the T20 crown on Vitality Blast Finals Day.

The showpiece took place a day later than planned and in truncated form due to bad weather at Edgbaston but for the Outlaws it was worth the wait, Duckett carrying his bat for 53 not out in 38 balls to haul in a winning target of 128 with six wickets and 16 balls to spare.

Christian was there at the end too on 21no, having also pegged Surrey back by taking four for 23 with the ball.

The Australian already had one starring role to his name, smashing four successive sixes off Lancashire’s Liam Livingstone in the semi-final, but was happy to let Duckett take the spotlight at the conclusion of the shortened 16-over final.

The 25-year-old ended the game almost three overs early when he dragged Surrey skipper Gareth Batty into the on-side for successive boundaries – the seventh and eighth of a mature innings and triumphant chase.

It was Nottinghamshire’s second T20 title following their 2017 win and a near miss for the Brown Caps, who had edged Gloucestershire in the first of the 11-over semis.

Without Jason Roy’s battling 66 they would have fallen even further short.

The London side had recalled former South Africa captain Hashim Amla for the final in place of Jordan Clark, but it was failed gambit. Amla looked all at sea as he eked three runs from 10 balls and could have been out twice before holing out off Samit Patel.

Roy might easily have beaten him to the pavilion when he turned Jake Ball to mid-wicket, only for Peter Trego to put down a low chance.

Will Jacks had no such luck, Christian taking a difficult catch after a sky-scraping top-edge off Ball.

A powerplay score of 24 for two represented modest work but Roy and Laurie Evans (43) set about putting things right as they clubbed 90 runs off the next 8.4 overs.

After a steady stream of boundaries they graduated to sixes, Evans pumping Imad Wasim and Patel over the ropes either side of a powerful, flat pull from Roy.

As long as they were together batting looked easy, but Christian ushered in a drastic change.

Evans was his first victim, lofting a cutter into the safe hands of Duckett then relying on a wonderful one-handed grab from wicketkeeper Tom Moores as Jamie Overton bagged a golden duck.

Roy was next, shuffling in his crease only to leave himself plumb lbw to Ball – who finished three clear atop the tournament’s wicket charts with 19.

Christian took the final over for himself and doubled his tally, Ben Foakes and Liam Plunkett succumbing as the innings meandered to a close.

An asking rate of exactly eight an over placed Nottinghamshire as favourite at the innings break, but the odds shifted considerably after a single ball of the reply.

That is how long it took power hitter Alex Hales to depart, turning Reece Topley straight to square-leg, yelling in frustration as Evans completed the catch at the second attempt.

With a big scalp in the bag, Jacks’ off-spin came to the fore as Joe Clarke (three) mis-hit a sweep and Patel picked out long-on twice in three balls. Rory Burns grassed the first chance but held his nerve to take his immediate atonement.

Duckett was making steady progress as his top-order colleagues flailed and found a steady partner in Trego.

Only playing due to Chris Nash’s injury, Trego clubbed Dan Moriarty for six off his fourth ball then joined Duckett in finally getting hold of Jacks.

The pair hit Surrey off their stride, Plunkett and Overton going for a combined total of 30, including nine in extras as discipline frayed.

Trego was trapped leg before by Moriarty for 31 to end the ninth over, leaving Duckett and semi-final hero Christian on deck. With five overs to go the pair needed 30 at exactly a run-a-ball, an equation that they never looked like fumbling.

With Christian scoring fluently, Duckett timed his pursuit of the winning runs and his own fifty perfectly, chalking up both with one swing to long-on off Batty.