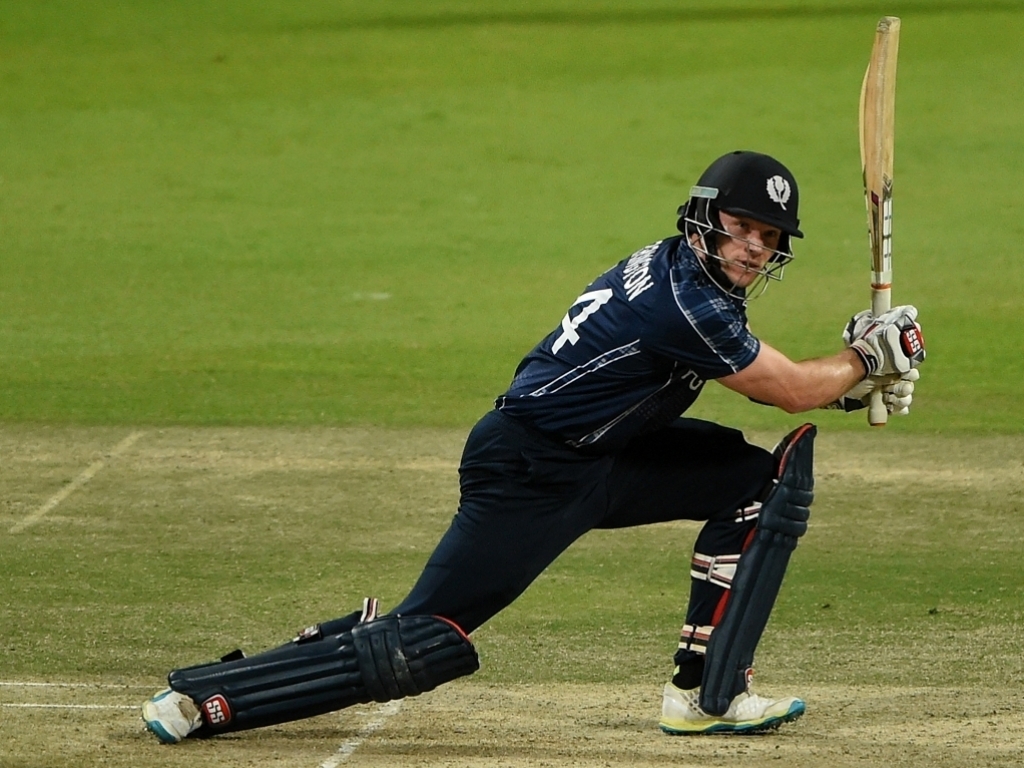 The first leg of the most important assignment in Scotland’s international summer ended with victory over Namibia in the opening ICC World Cricket League (WCL) fixture at Raeburn Place. After rain in Edinburgh had first reduced the match to 43 overs and then forced it into the Monday reserve day a magnificent 110 from Richie Berrington proved to be the difference as Grant Bradburn’s men closed the gap on the Netherlands at the top of the WCL standings.

Despite the pre-match warm-ups taking place in bright sunshine the forecast of heavy rain on Sunday afternoon made the prospect of Duckworth-Lewis the most pressing issue for the captains to consider. It was likely to be a good toss to win and Namibia’s Sarel Burger duly asked Scotland to bat first after he called correctly.

Although the predictions of more typical Scottish summer weather were to be proved correct in due course, unusually settled conditions over recent months have resulted in good, true pitches in these parts. That this was going to be another excellent batting track, too, was quickly apparent as Matthew Cross got Scotland underway with back-to-back punches to the cover boundary. At the other end Kyle Coetzer showed similar intent, lofting the ball to cow corner for four before watching his partner hoik Burger over deep square leg for the first six of the innings.

The eighth over was to bring Scotland’s brisk progress to a sudden halt, however, as in the space of three balls first Cross (21) and then Coetzer (15) pulled identical deliveries from Christi Viljoen straight to JJ Smit on the square leg boundary. With the rain moving in the home side’s momentum was further disrupted by a lengthy delay, and when Calum MacLeod (22) was caught at midwicket almost immediately after the players returned from a second interruption the Scotland innings was precariously balanced at 80-3 midway through the 21st over.

The stage was set for Berrington, though, who responded with a superbly crafted innings. Supported first by Craig Wallace (29) and then Preston Mommsen (49*) the all-rounder looked in formidable form as he powered his side towards a challenging total.

It was an extraordinary performance. Having taken 29 balls to reach double figures Berrington suddenly hit his stride, smashing slow left-armer Berhard Scholtz into the Grange tennis courts before clearing the ropes for a second time to pass fifty in 58 balls.

He was to add two more maximums on his way to a century which took only 26 further deliveries to reach, and although an eventful 40th over was to bring the hundred partnership, the team 250 and, finally, the Clydesdale man’s wicket, Berrington departed having equalled his best international score.

Mommsen, meanwhile, looked commanding on his return to national colours. Always a key component in Scotland’s middle order, the former captain quickly settled back into that familiar blend of craft and belligerence as he provided the perfect foil for his partner. All involved in Scottish cricket, not to mention the Associate world at large, are mighty glad to see him back.

Chasing 269 to win, Namibia began confidently with Louis van der Westhuizen finding the boundary repeatedly in the early stages. The weather was destined to have the final say, however, as the rain rolled in once more to bring an end to Sunday’s proceedings with Namibia 26-0 after 5.1 overs.

The reserve day began in a mixture of sunshine and confusion. Van der Westhuizen was declared ‘retired not out’ due to an ankle injury but was then cleared to bat by the team management only a few minutes later, and the opener appeared to be suffering few ill effects as he and partner Stephan Baard ran hard between the wickets as the rain-affected outfield slowed the run of the ball.

The eighth and ninth overs were to bring a double breakthrough for the Scots, however, as van der Westhuizen (33) was trapped in front by Safyaan Sharif before Baard (12) pulled a Chris Sole delivery straight to Mommsen at square leg six balls later. It left Namibia in a similar position to that in which Scotland had found themselves the day before, and as they looked toward their middle order some brilliance was needed.

Unfortunately for the visitors it was to come from Scotland. A pull by Craig Williams (4) off Ali Evans high towards deep square leg was chased fully thirty yards by Con de Lange who completed the catch with a backward dive. It was a truly stunning moment and when dangerman Jan Frylinck followed for a duck ten balls later Scottish tails were well and truly up.

Yet at 109-5 after 23 overs Namibia was still ahead of where Scotland had been, albeit for the loss of one wicket more, but the batting side appeared determined to be the architects of their own downfall. Gerhard Erasmus (35) had looked well set, smashing two sixes off de Lange, but when he swept Berrington’s fifth ball straight to Evans at short fine leg there was little remaining hope of his side getting close to their target. Some entertaining hitting from Zhivago Groenewald (42) only delayed the inevitable, MacLeod taking the final catch to give Sharif a third wicket and Scotland victory with more than three overs to spare.

It had been another composed display from a Scotland side that has clearly discovered how to win with consistency. The two sides meet again tomorrow (Tuesday) in the second match of the series and, with the Netherlands three points clear having played a game more, Scotland will look to maintain the pressure on their European neighbours as the WCL moves towards its climax.