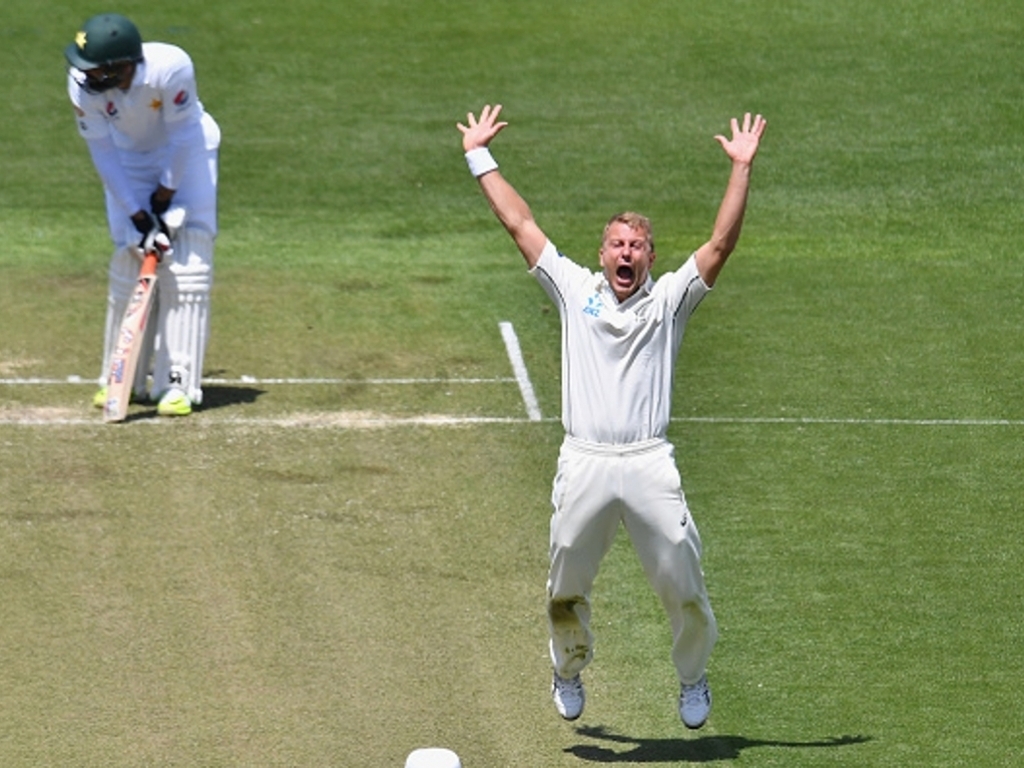 New Zealand asserted their dominance over Pakistan on day two of the second Test at Seddon Park in Hamilton leaving Pakistan five down by the close.

New Zealand posted a highly competitive total of 271 all out on a green wicket before reducing Pakistan to 76 for five by the close of play.

Day one of the Test was rained out after just 21 overs but the second day provided plenty of action.

New Zealand resumed on 77 for 2 with Jeet Raval and Ross Taylor at the wicket and the name of the game was always going to be score while you can before the quicks nip you out.

Taylor (37) was the first to go in just the fourth over of the day when he nicked off to Sohail Khan.

Jeet Raval (55) recorded his second Test fifty in his third innings before he became Imran Khan’s first Test wicket in over a year to leave New Zealand 113 for 4.

Henry Nicholls faced 52 balls for his 13 runs but his stubborn resistance was brought to an end by Wahab Riaz, who dangled a full delivery outside off that the batsman couldn’t resist.

BJ Watling and Colin de Grandhomme would steady the ship adding 51 for the sixth wicket as the Black Caps counter-attacked.

De Grandhomme has scored some valuable runs in this series and got another 37 before he was adjudged to have been caught behind after a review by Imran.

New Zealand’s tail did an excellent job adding 101 runs for the final four wickets with Watling eventually left high and dry on 49 not out.

There were handy contributions from Mitchell Santner (16), Tim Southee (29) and Matt Henry (15).

Pakistan’s reply got off to an awful start as Southee picked up three wickets inside the first ten overs.

Sami Aslam (5) and Azhar Ali (1) both departed in the fifth over with Aslam caught at second slip by Raval and Ali nicking one through to keeper Watling.

In the ninth over Younus Khan joined the popular nicked behind club as he was sucked into flashing at one outside off.

Babar Azam and Asad Shafiq provided some resistance but Neil Wagner would break up their partnership as the latter showed poor foot movement and chopped on while attempting a drive.

Mohammad Rizwan couldn’t resist hooking Wagner despite being new to the crease and holed out in the deep to leave Wagner on a hat-trick.

Srafraz Ahmed (9 not out) whipped the hat-trick ball through midwicket for one though and the keeper would stay with Babar (34 not out) until the close.

Pakistan still trail by 194 runs with just five wickets in hand and are facing an uphill battle to stay in this Test.