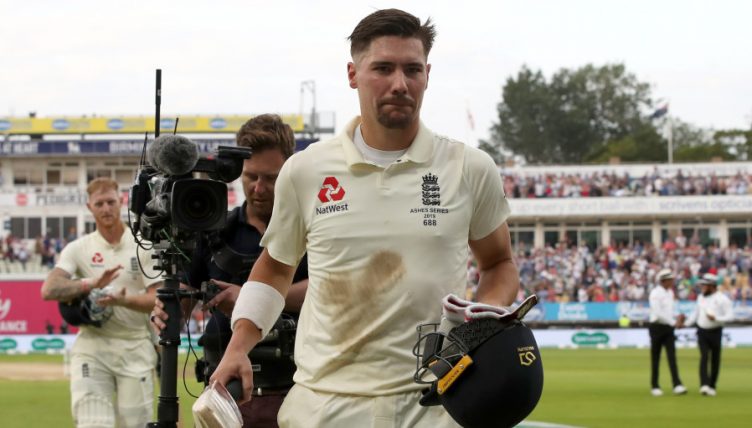 A maiden Test hundred from Rory Burns thrusted England into a strong position at the close of day two, but the Surrey opener was under no allusions that the match result could still swing either way.

Burns scratched and clawed his way to an unbeaten 125, batting out the day from start to finish in the process.

England concluded the day on 267-4 and still trailing by 17, but Burns’ contribution along with a half-century from England captain Joe Root ensured England are well poised to pile the pressure on the Australians on day three.

Speaking to Sky Sports‘ Ian Ward immediately after the game, Burns said of his experience: “It was pretty good, quite an enjoyable experience that.

“Little bit different to the Ireland test match last week. It was awesome – a really good experience with that stand (Eric Hollies) rocking, it was quite something.

“[There’s been] lot of hard work, the coaches, parents, it’s all thanks to them really.

Speaking on his tenative approach as the landmark approached, Burns said: “Yeah I was just waiting for a ball that was a dead certainty, I was playing within myself and telling myself not to sweep. I was just waiting for something in the arc and I eventually got there with a quick 20 meter sprint for a single.

“For me that’s probably quite an emotional response (his celebration), I don’t think I’ve ever really thrown my hands around or anything like that.

Australia successfully got the ball changed around the 60 over mark, at which point batting conditions immediately ramped up in difficulty.

Burns, however, always believed he could survive the spell as long as he remained true to himself.

“It was quite a slow pitch and the ball stuck in the pitch and swung a bit so it was difficult at times but it shows that if you wait long enough and you get something in your area you can go a long way,” said Burns.

Just a week ago questions about whether Burns would even be selected to start in the first Ashes test were raised after two sub-par performances in the warm-up game versus Ireland.

Reflecting on his struggles versus the men in green, Burns said: “I was just thinking that I’ve been trying to embrace opportunities as they come and the next game is always another opportunity. I was struggling with my rhythm at Lord’s and I was just searching for a way to get it back.

“I’m just trying to find a rhythm where I’m more balanced and more central so I’m not falling over as much, and it worked.

“Sometimes you’ve got to get in a battle and scrap away.

England are now firm favourites to take a one-nil lead in the series, but Burns admits that the result of the first Test is far from a foregone conclusion.

“They’ve still got a new-ish ball and we’re still behind so we have to weather that storm and all the other cliches, [We have to] play well in the first hour and if we get our noses in front, its about getting as big of a lead as we can.”