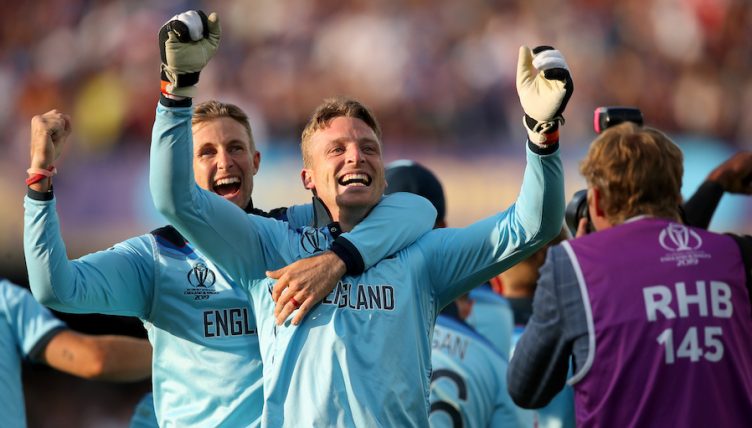 Jos Buttler has revealed how team psychologist David Young helped him overcome a fear of failure ahead of England’s World Cup triumph.

England were crowned world champions for the first time last Sunday thanks to a thrilling super over win against New Zealand at Lord’s.

Just days before the final though, Buttler was wondering if he could ever play cricket again should his side go on to lose the final.

“I had played in eight finals before Sunday and lost seven of them,” Buttler told The Daily Mail.

“I’d played in lots with Somerset, the Champions Trophy with England [in 2013] and when we lost the [World] T20 [final] in Kolkata [in 2016] and I knew how much it hurt watching the other team lift the trophy. I didn’t want to feel that pain and that regret again.

“What was scaring me was if we lost, I didn’t know how I’d play cricket again. This was such a once-in-a-lifetime opportunity, a World Cup final at Lord’s. It felt like destiny and I was thinking: ‘If it doesn’t happen, I will have no motivation to pick up a cricket bat for a very long time.’ When I was talking to David, I knew the answers.

“Before the India game, I was struggling with coming to terms with the prospect of us getting knocked out. We’d been favourites, so highly fancied by everyone, and there was the danger that four years of playing such good cricket was going to come to nothing.

“Think about what people will say about us as a team, think about how they will call us chokers, everything else they will say. I remember seeing a comment — maybe it was the one that got Jonny Bairstow wound up — about how it would be the biggest failure because of how much had gone into this World Cup. I was struggling with the thought of that.”

Buttler also admitted that he was relishing the moment as Archer stormed in to bowl the last ball of the super over.

“If you’re watching the game from the outside, you must think all the players must be so nervous as Jofra Archer is coming in to bowl that last ball. But as a cricketer, it’s where you want to be. You’re in the middle, you’ve got some control. You’ve done it time and again. Just because it’s a final, it’s still the same thing, collecting the ball and taking the stumps.

READ MORE: The A40 dive bar and the answer to England’s big Ashes dilemma

“You’re on autopilot really. I felt very in-the-moment. Guptill pushed it off his legs and once I saw it going straight to Jason [Roy], I thought: ‘If we get this right, we can win this’. I knew Guptill would be a long way out. Under pressure, nothing is simple but I knew it should be simple.

“When Jason picked it up, there was no thought he might misfield it. None of those thoughts happen. He picks it up, throws it to me and I take the stumps. I had to come down the pitch a little bit but I knew that as long as I collected the ball cleanly, I would have time to get to the stumps because he was a long way out.

“If I knew Guptill was going to be closer, I may have been more anxious or rushed it, but I knew I had some time to play with, so it was just as simple as making sure I got it in my hands.

“I knew the moment I broke the wicket, that was it. Both gloves went [off], I threw my hat in the air. I was running around and Moeen Ali was aeroplaning past me and Jofra was on the floor miles away. Those feelings justify everything. That moment lasts for 20 seconds, maybe, and it is just the best time of your cricket career.

“I’m 28 and for however long I have left in my career, I would just enjoy it and think: ‘That happened’.”