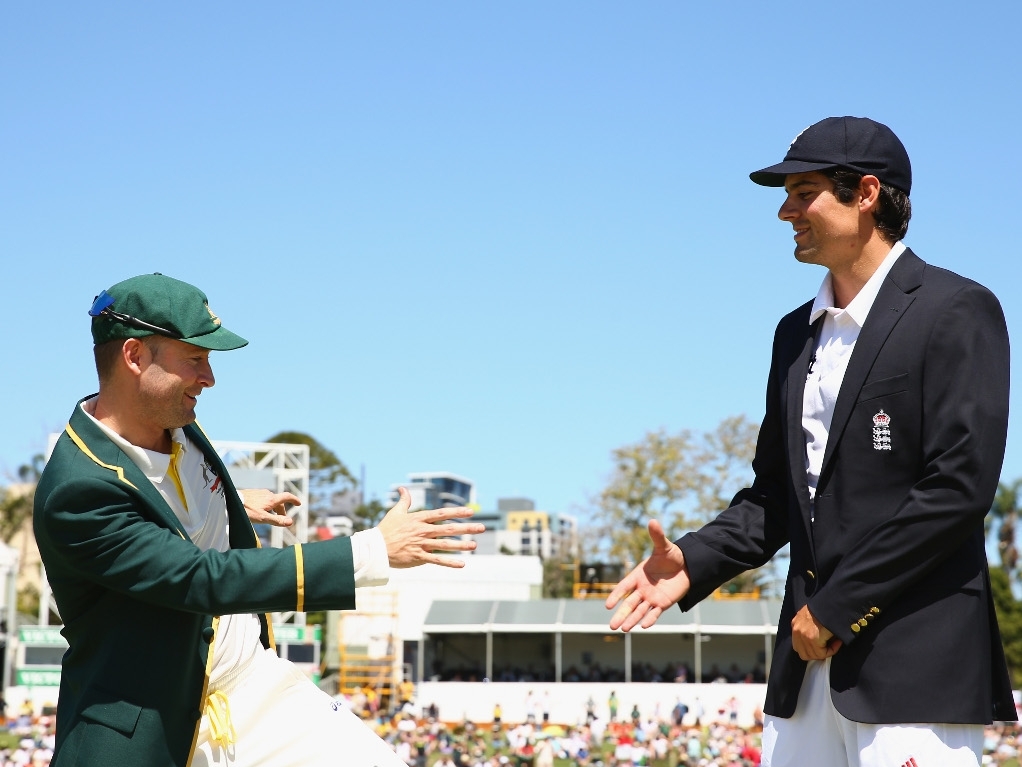 As the first Ashes Test in Cardiff approaches, here is the obligatory 'key battles' piece that the cricketing laws require every outlet to publish.

The battle of the captains is always billed as one of the key determining factors in any Ashes series. Perhaps it’s overstated – the team with the best players tends to win. A chicken wearing a Fez could have led that great Aussie side of the early 2000s to victory.

As batsmen, their records are almost entirely even. Both have over 100 Tests, both have a similar number of Test runs and both have round about the same average. Cook doesn't have a knackered back, Clarke doesn't face the new ball.

Both seem to have the full backing and support of their team, at least on the face of it. Cook certainly does. Clarke’s relationships with some of his elder statesmen hasn't necessarily always been smooth.

Clarke is leading a team with a great deal more experience. Cook has a team full of youthful exuberance and without the battle scars of previous series.

It doesn't take a genius to analyse that Clarke is by far the more instinctive captain on the field. Far less risk-averse. Far more comfortable with aggression both in his field placings and with his mouth.

Cook may be more inherently conservative but equally he may have sensed the sea change that happened during the New Zealand series and there was more than a hint of a slightly different Cook.

On the basis of the evidence of history, Clarke probably wins this match-up but be prepared for it to be a close fought battle, albeit one in which both men employ different but equally effective tactics.

The two number sixes.  The 34 year old much maligned Shane Watson, with 58 Test matches under his belt, 3600 Test runs to his name and 75 Test wickets. If we're looking purely at stats, Watson is the man you'd want.

But that’s not the story. Watson’s periods of success with the bat have come when he’s been opening. He may have 75 wickets to his name but his body breaks quite easily and he’s one of the world’s most reluctant Test bowlers.

Stokes on the other hand has a fully functioning body (except when he has interaction with a locker) and runs in to bowl with all the enthusiasm and energy of Road Runner having spotted Wile E Coyote.

It may be that by the end of the series, Watson will have more runs and wickets but Stokes will have turned a game in a session – even if it’s only just the once. I know which I'd rather have in my side

You might not believe it but we've not actually had that much rain in the UK this summer and it was a dry winter too. The pitches might be drier and more conducive to spin than one might anticipate. In which case, is either team brave enough to pick two spinners?

Are England brave enough to pick what could be seen as the more attacking option and go for legspinner Adil Rashid? Nathan Lyon is a more than capable Test match off-spinner. He’s better than he’s given credit for and he’s a vital cog in Australia’s wheel.

But then the Australian’s aren't afraid of either Moeen Ali or Rashid. Neither have Ashes experience, Rashid has no Test experience at all and to blood him in an Ashes Test would be a gamble. But one that would send out an attacking message to the Aussies who struggled more against leg spin in the West Indies than they did against off-spin.

They're a team of right handers who will look to target off spin over extra cover or straight down the ground. Rashid can turn the ball both ways. The battle of the spinners may turn out to be a more vital one than we had anticipated.

For England, Steve Smith the key wicket. For Australia, Joe Root is the key wicket. Nullifying these two men who are both in ridiculously good form may be a key factor for whichever side manages to do it.

England’s fortunes in this Ashes series depend so heavily on how Jimmy Anderson plays. Of the other England seamers, Stuart Broad will have one incredible spell every five Test matches; Mark Wood, hugely exciting as he is, only has 30 first-class matches to his name; Steven Finn is back firing but not back to what he once was at his best; Liam Plunkett hasn't been named in the Cardiff squad – perhaps he’s not fully fit or perhaps he didn't impress on the training camp; Mark Foottit is an outside chance.

It’s Anderson who must lead and spearhead the attack and he’s going to need to do it for all five Test matches. It’s a heavy workload for a man in the Autumn of his career. If he isn't on song, it could be curtains for England.

Australia, on the other hand, even without a broken Ryan Harris, have a battery of pace to pick from and those that lack experience (Hazlewood and Starc) are coming into the series in searing form. Johnson is Johnson and even those who didn't play in the 13/14 whitewash series will have clocked how he blew England away. Even if they say otherwise, that will be in their minds.

'The side with the best bowling attack wins the Ashes' is a bit of a tired expression that gets trotted out too much but there is something in it and even given England’s recent upturn, they did only draw the recent series with New Zealand and the one before that against the West Indies.

Ashes series never quite pan out how you expect but looking it at now, it’s hard to see how Mitchell Johnson and his colleagues don't trump Anderson and his.