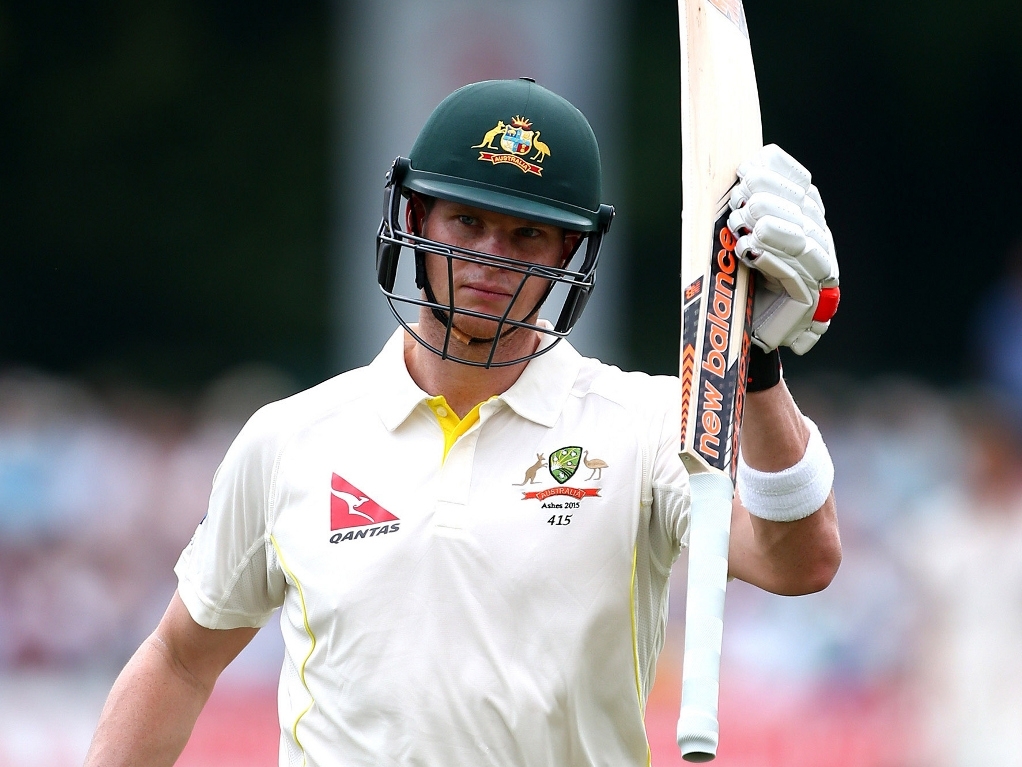 Regular Ashes predictions are so boring, so we've whipped up a set of more interesting gambles, with a few serious ones thrown in, with the help of colleagues and blogging friends. What are your predictions to these questions?

1. Which England bowler will be hit for the most runs by Steve Smith?

PM: Steve Smith doesn't discriminate. He will score an equal number of runs off each bowler. He is an equal opportunities phenomenon.
EA: Stuart Broad. The answer is always Stuart Broad. Whatever the question is.
SO: Moeen Ali. The others are going to have the wood over him. Especially Wood. Wood will have the wood over him.
AC: Simon Kerrigan. The Oval reprised when the arse has completely fallen out in mid-August.
JW: Steven Finn, including a slew of bail-breaking foot faults, which the ICC decide mid-series will count toward the batsman on strike's score.
LdP: Stuart Broad, because while Wood or Moeen might get taken off quickly by Cook, the skipper will persist with buddy Broady, even if he's tired, bowling slowly, completely off his game.
NA: Mark Wood. It will be a reminder of the days when was a 'net bowler' in the Durham nets to the Australians on their 2009 Ashes tour.

2. Which two players will be involved in the first major 'banter' incident?

PM: It will be Dave Warner and someone else. It is always Dave Warner. It might be Dave Warner and a member of his own team.
EA: It’s bound to be David Warner and he'll probably fall out with Glamorgan’s mascot Dewi the Dragon.
SO: I fully expect the mics to pick up Clarke telling Cook that he's going to get a "broken fucken arm" before the toss at Cardiff. A broken arm during the toss.
AC: Wind up merchant Joe Root to forcibly drag Dave Warner back into the mud.
JW: James Anderson and Michael Clarke, as the former threatens to break the latter's effing marriage.
LdP: Nasser Hussain and Michael Clarke. The former England skipper will ask something in his usual blunt way at the stumps presser, and Pup will give him a snappy retort. Twitter will explode.
NA: Alastair Cook and Trevor Bayliss. The two will have a disagreement in the dressing room before the toss of the first Test because Cook wants to bowl first. Someone from the ECB will record their conversation and leak it to the press.

3. Which Mitchell will have the best series?

PM: Mitchell Marsh is on the brink of becoming the next Shane Watson, except without the inconsistency and the LBWs. Watch out for him.
EA: Mitchell Santner. He'll come out of this looking like a genius.
SO: Marsh. Starc is going to melt like an ice cream in the sun, blaming it on the red dye used in cricket balls. Johnson will discover East London's hipster quarter and run off with a woman who runs a cat cafe.
AC: Marsh. Hits long bombs.
JW: Mitchell Claydon, as England call up Kent's New South Welshman in a last-ditch effort to salvage the series.
LdP: If he gets past Watto, it must be Marsh. He's got two tons in two tour games, and bowls more eagerly than Watson. He's just so… Mitch-y.
NA: I would have gone for Mitchell Santner but then remembered he is not an Aussie so will have to settle for Mitchell Johnson. Starc is too 'soft', they might just give him a pink ball to play with, and Marsh will not play enough games because Lehmann will pick his son Watson.

4. Which fictional character will Stuart 'Draco Malfoy' Broad be associated with this time? What will he do?

PM: Every chance Broad will be gone by the 4th Test. Therefore – Sirius Black (For pedants: He dies in the 5th book, but we get the point. He doesn't finish the series – Ed)
EA: Wembley from Fraggle Rock. He'll have a fight with a Doozer.
SO: I'm not familiar with the Buck Rogers stories, but he will back away so far that he'll end up standing on, and spiking to death, Chris Rogers, who I presume will field at short-leg.
AC: Clark Kent, when he bowls England to victory at Edgbaston after conceding 0/200 in the first innings.
JW: SpongeBob SquarePants, after he endures an absorbent, yellow and porous series opener.
LdP: Blonde, whiny, expecting wickets without actually appealing, and running the risk of not reaching the end of the series. Joffrey Baratheon.
NA: If, as expected, Broad cops lots of short balls from the Aussie pacemen he could bear a few battle scars by the time the series is done. The Aussies might just call him Running Man for stepping so far towards the square-leg umpire to avoid the short ball.

5. Who will score the most runs in the series?

PM: Joe Root
EA: The dull answer is probably Steve Smith but things with England can be so weird it might well he of the dodgy technique, Gary Ballance.
SO: Joe Root. And he'll smile the Aussies to distraction.
AC: Steve Smith, obviously.
JW: Steven Smith, without a doubt.
LdP: Alastair Cook. Silly wager, why not.
NA: David Warner will top the run-scoring charts, obviously, because he will play with no fear and England dare not sledge him. He will punch anyone who talks dirty to him in the face.

6. How many games will Chris Rogers get?

PM: Five, then he will retire before the Pink Ball Tests vs New Zealand, because he can't see pink balls.
EA: Seven (Including the two tour games – Ed)
SO: Depending when he's spiked to death by Broad, a maximum of three before Shaun Marsh is called in.
AC: Five. He does (some of) his best work when his back is against the wall.
JW: An early suspension for Warner will render the Rogers-Marsh debate a moot point, so four games for Rogers.
LdP: Four. Shaun Marsh will get the opening game, based on form, but will bag a pair and Bucky will return triumphant on what is practically home soil for him.
NA: Bucky will play all five Tests, score a century at Lord's, getting his name on the honours board, and then live happily ever after.

7. How long into the first England innings will it take for KP to tweet something inflammatory?

PM: He won't tweet it, it will be in his Telegraph column
EA: He’s going to go all series without saying anything even vaguely quotable.
SO: KP's long since been playing the schmaltz game. The only thing that could take him out of his reluctant diplomacy is an embarrassing display of backing-away by Broad and/or Anderson. So, in answer to your question, about 30 overs.
AC: The moment before they consider calling him up at 2-nil down.
JW: James Anderson's opening wide to second slip with the first delivery of the series.
LdP: Inflammatory for whom? He'll spell something incorrectly in Afrikaans, as he always does when watching rugby, and piss off half of Suid Afrika.
NA: As soon as England are one wicket down and Gary Ballance has his first play and miss. KP will jump on the bandwagon and question his technique. #DropBallance

8. Who will get the spin job for England, Moeen or Adil?

PM: Moeen, but he will be told he isn't good enough for the whole series regardless of how well he does
EA: Well it'll probably be Moeen for the first Test at least – unless hell freezes over and England pick two spinners.
SO: I'm still hoping Monty can make a late run on the outside, but if not then it will be Moeen. I fully expect him to be engaged in a long process of bearding the Aussies into a false sense of security.
AC: Both. Unsustainable to leave it with Moeen alone, have to take a punt.
JW: Joe Root, as England opt for a four-batsmen, seven-seamer attack, time and time again.
LdP: They'll stick with Mo initially, as he has the experience and is a better batsman. Probably. Or Adil will get an Ashton Agar-like call, play two games and never be seen again.
NA: Moeen will play the first two matches and Rashid will go for more than 100 in his first 10 overs in the third game. England will then summon Gareth Batty for the final two matches with the series already lost.

9. Which random player will be called up mid-series to make a disastrous debut?

PM: Jade Dernbach
EA: Ex Leicestershire wicket keeper Paul Nixon will be called up to bowl some medium pace.
SO: Trevor Bayliss, which will prove highly confusing.
AC: Glenn Chapple to get a Test cap at 41, forced into the captaincy after Cook is hounded out after Trent Bridge.
JW: Tymal Mills' back troubles aren't so troublesome after all, until they are.
LdP: Jacky Brooks. In an effort to make the whole side from Yorkshire, Ferret will replace Wood in the third Test.
NA: Jos Buttler gets injured, Jonny Bairstow is not available because he is not fully fit so Sam Billings is driven to the ground on the morning of the third Test, arrives just before the toss. He drops two catches simple chances and gets a pair. Welcome to Test cricket mate.

10. What will the final scoreline be?