Cape Town Blitz off to rousing start in MSL opener 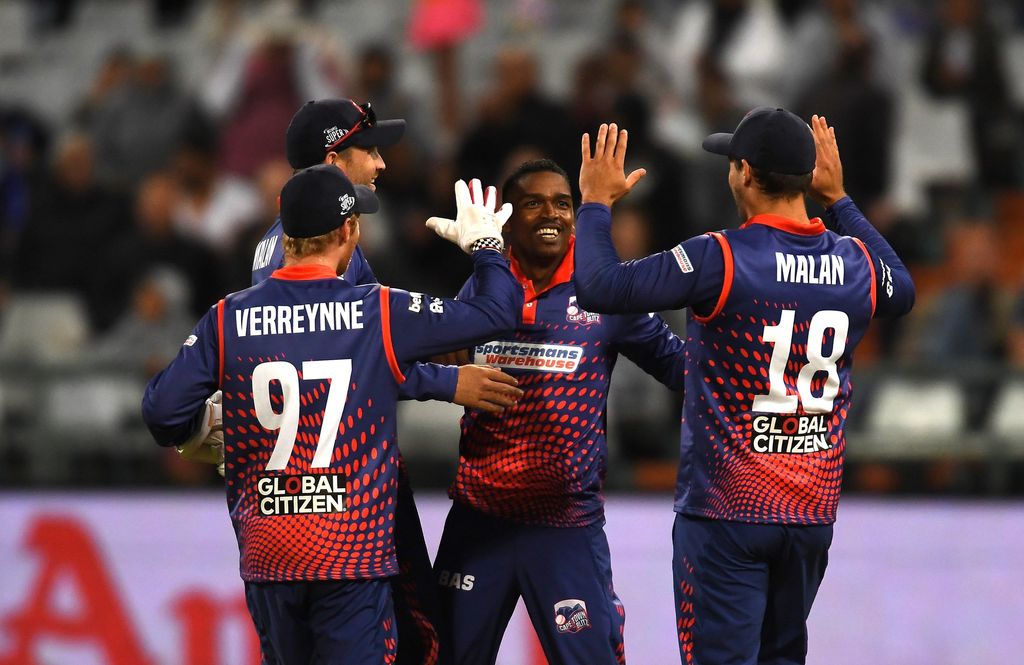 Ferisco Adams struck twice in two balls to ruin the script for AB de Villiers and the Tshwane Spartans as the Cape Town Blitz launch the inaugural Mzansi Super League with what ended up being a comfortable 49-run victory in Cape Town on Friday night.

Chasing 181 for victory, the visitors appeared to be on course for victory on 116 for three and with the former Proteas captain motoring along on 59 at a strike-rate of close to 200.

But allrounder Adams had De Villiers snapped up brilliantly by Anrich Nortje on the deep cover boundary for 59 off 30 balls (3 fours, 5 sixes), before cleaning up another key man Rilee Rossouw (15) next ball to knock the stuffing out of the Spartans chase.

They eventually slipped to 131 all out – a heavy loss at Newlands.

Adams’ figures of three for 28 was only one part of the story, with the match initially set up by a fine fourth-wicket century stand between Mohammad Nawaz and Kyle Verreynne.

The pair both struck career-best scores with Pakistan all-rounder smashing 59 off 37 balls (7 fours, 2 sixes) and rookie Verreynne clubbing 53 not out off 34 balls (6 fours, 1 six).

At the start, the Spartans won the first toss of the competition and opted to bowl first with Andrew Birch (2/39), Jeewan Mendis (1/29) and Robbie Frylinck (1/34) all striking inside the first nine overs – the latter claiming his 100th T20 wicket in his 100th match in the format.

The men to go were Dawid Malan (5), Janneman Malan (19) and Jason Smith (25) as the hosts were left under pressure on 67 for three at halfway.

Nawaz and Verreynne put on exactly 100, with George Linde adding a quick-fire 13 off four balls to end the innings with a flourish.

The Cae Town Blitz made a surprise move by opening up with Dane Piedt (1/15) and he rewarded his captain for the move by getting Tony de Zorzi (4), with Gihahn Cloete (3) falling to Malusi Siboto (1/13).

It was 69/2 at halfway with a brilliant caught and bowled by George Linde (1/21) ending a 43-run stand between De Villiers and Dean Elgar (32) – the spinner parrying a firmly struck straight hit into the air and then dived forward to take a one-handed catch.

Spartans skipper De Villiers and Rossouw then put on 46, but just as the former found his gear, he was sent packing by Adams.

The latter followed and the rest fell away, bowled out in 19.3 overs, handing the Tshwane side a heavy opening loss in front of a sizeable crowd in Cape Town.