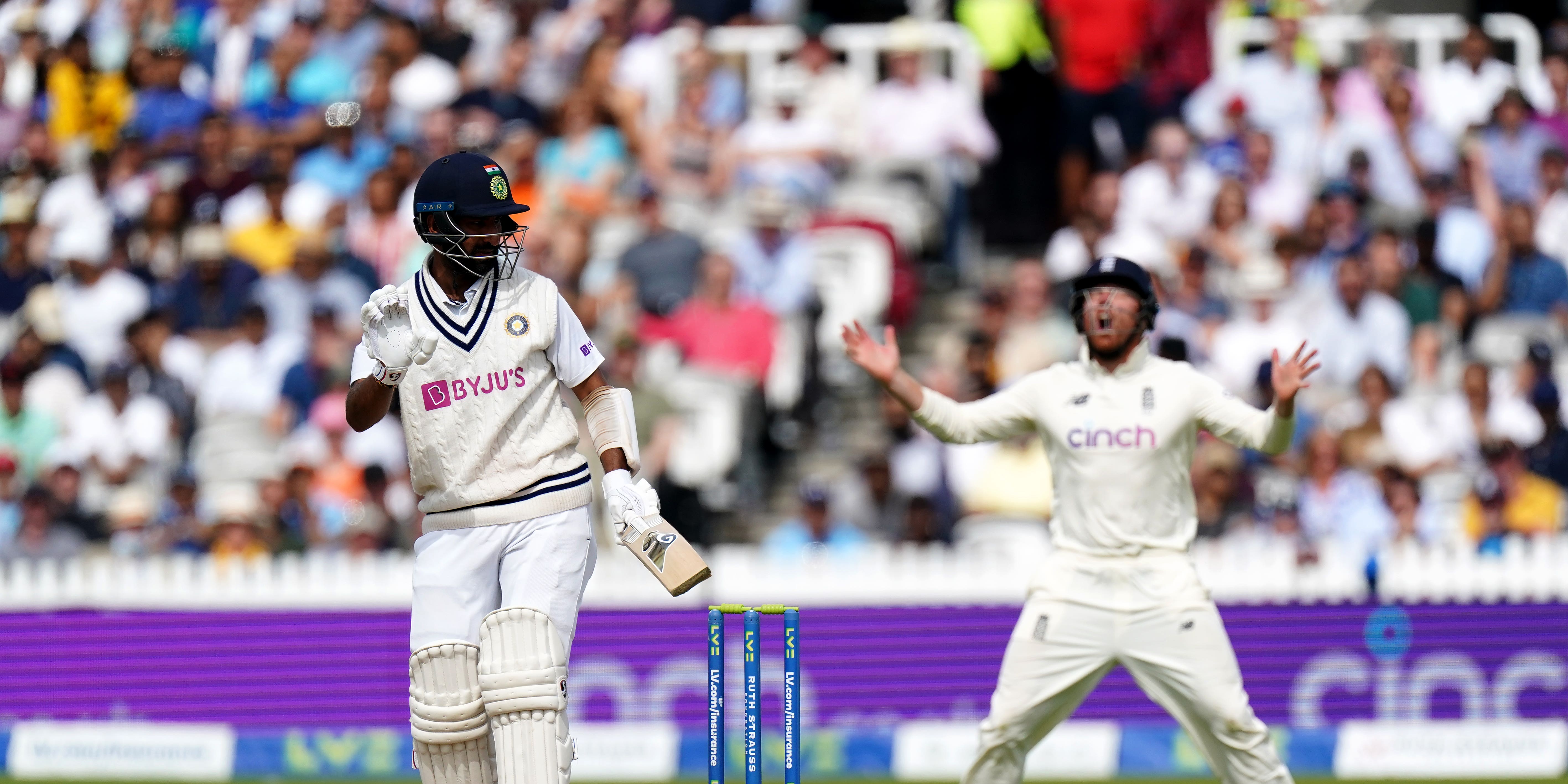 England threatened to take control of the second LV= Insurance Test against India on day four at Lord’s before Cheteshwar Pujara and Ajinkya Rahane shut up shop in the afternoon session.

That left India on 56 for three at the break, only 29 ahead and in real danger of being pushed into a corner. But Pujara (29 not out) and Rahane (24no) settled for a policy of outright defence, slowing the England charge with every block.

Pujara set the tone, taking 35 balls to score his first run and squeezing just 11 after 100 balls. In the end the fourth-wicket pair guided the score to 105 for three at tea – 78 in front.

India began their innings 27 runs behind following Joe Root’s game-changing 180 not out but England needed early wickets to force home that slender advantage.

James Anderson was not able to provide them despite an extended nine-over examination with the new ball, but Wood was on hand to force the door open.

He was hurried into the attack after just two overs from Ollie Robinson at the Nursery End and found the ideal combination of speed and accuracy to remove first-innings centurion Rahul, who nicked a 93mph ball in the channel.

England were still ahead by nine when the breakthrough came, but Rohit cleared the remaining arrears in style by hooking Wood for six over fine leg. It was a thrilling, brave stroke but one that came loaded with risk due to two boundary catchers on the leg-side.

Root gave Wood the nod to go again by sending a third man out and, while Rohit ignored the next bouncer, the temptation proved too much. When Wood dug another short one in, Rohit launched into a full-blooded hook but this time got a little less on it. In rushed Moeen Ali from long leg, taking a smart low catch to leave India two down with the scores level.

The job of building the lead fell to Kohli and Pujara, with the latter taking a painstaking 35 deliveries to get off the mark.

India’s confidence rested heavily on Kohli’s output, with Root wasting a review on a hopeful lbw appeal from Curran in an attempt to take him out. There were some heated words from Kohli to Anderson, some of which required an apology from the broadcasters, but England had the last laugh over him.

Curran was the man to get the India skipper, shaping a couple of balls in before allowing one to angle away and clip the edge on its way through to Jos Buttler. After a wicketless first innings and a golden duck with the bat, Curran had finally got into the match in a big way.

Things looked to be set up for a box office afternoon but instead Pujara and Rahane sucked the heat out of the situation. There were just 12 runs in the first 10 overs after lunch and 19 in the first hour.

The crowd began to shower Pujara with ironic cheers, roaring his 100th delivery as though it were a more authentic century and bellowing their approval when he found the boundary ropes for the first time.

India’s victory hopes were not moving quickly, but by making England toil away he and Rahane were reducing England’s window for a positive result of their own.