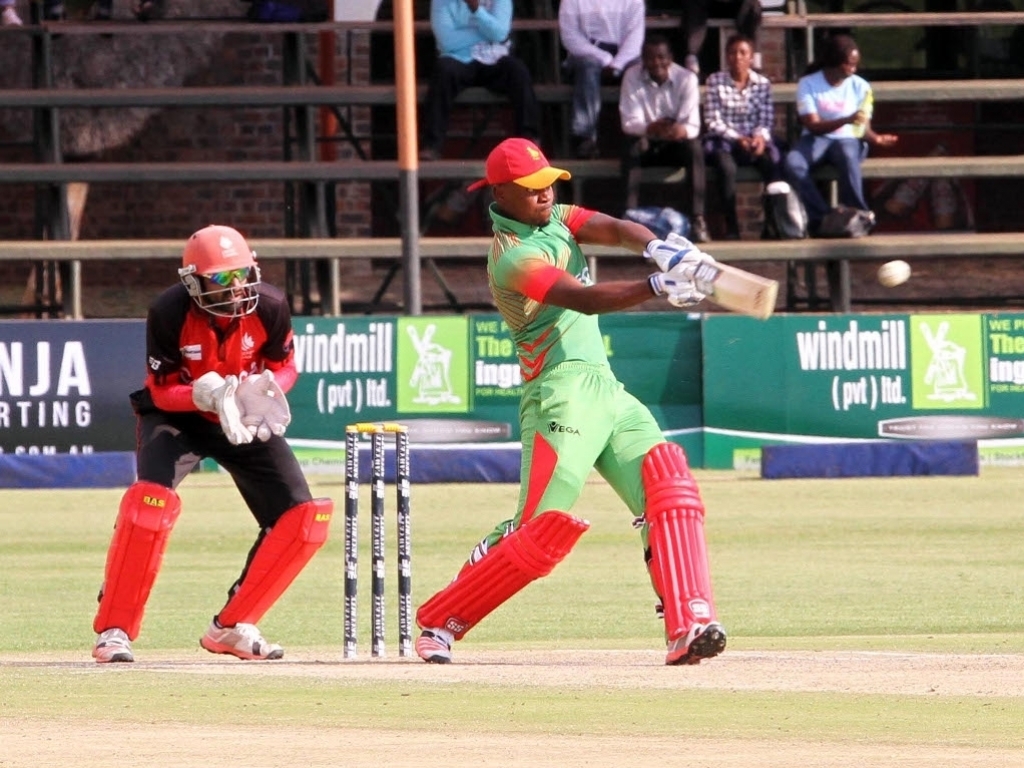 Zimbabwe A, despite a patchy performance, scraped through to beat Canada by two wickets in the first unofficial one-day international match at Harare Sports Club.

The hosts will have to thank to the power of their middle order and a fine innings of 65 by Chamu Chibhabha for the win.

Zimbabwe A came into this match fresh from four successive victories on their triumphant tour of Namibia during the past two weeks.

The sun was shining as Canada won the toss and decided to bat.

Their openers, Durand Soraine and Bhavindu Adhihetty, made a confident and impressive start against the bowling of Chris Mpofu and Tendai Chatara.

They never seemed in trouble and selected their strokes well, putting on 57 within 15 overs before Soraine drove a ball from Nathan Waller into the covers and was well caught low down by Sikandar Raza.

The left-handed Adhihetty, now in partnership with Navneet Dhaliwal, continued to bat skilfully and went on to reach his fifty off 71 balls.

The Zimbabwe A bowling could make little impression, as the batsmen, though not often reaching the boundary, kept the score ticking over with well-judged ones and twos, especially off the seamers.

Solomon Mire, available to Zimbabwe for the winter, came on to bowl his seamers, and quickly removed Dhaliwal (18), who tried to scoop a ball to leg but only succeeded in lobbing a simple catch to the keeper; 105 for two in the 29th over.

Dhanuka Pathirana was the next man in, but Adhihetty finally departed for a good innings of 70, as he slashed at a ball outside the off stump from Raza and was caught at the wicket.

He faced 97 balls and hit four fours, the score then being 133 for three after 34 overs.

Rizwan Cheema came in to join Pathirana and almost immediately slogged a ball from Mire over wide long-on for the first six of the match.

The batsmen were now trying to increase the scoring rate, but their success was limited, and Pathirana went for 21 when he slashed a ball from Wellington Masakadza into the covers and was caught; 167 for four in the 40th over.

Cheema had a narrow escape on 16 when he top-edged a pull off Mpofu, but the wicketkeeper PJ Moor, leaping up, could only parry the ball, which went on to the boundary for four; he followed it with a six next ball.

At the other end, however, he swung at a full-length ball from Raza and was bowled for 26; 180 for five in the 42nd over.

The 200 went up in the 45th over, with Hamza Tariq and Nikhil Dutta at the crease.

Both batsmen played some unorthodox shots as they sought to increase the score in the dying overs, and the Zimbabwe A bowling was not always as disciplined as was desirable.

The partnership was broken when Chatara’s slower ball, although an unintentional full toss, deceived and bowled Tariq for 22; 228 for six in the 49th over.

However the new batsman, Satsimranjit Dhindsa, swung the next ball for six over the square-leg boundary.

The final score was 248 for six wickets, with Dutta on 34 and Dhindsa on eight.

This did not appear to be too daunting a target for the Zimbabweans, as Canada felt the need for more big hitting in their top order.

Raza was the only bowler to take two wickets for the home side, while the left-arm spinner Masakadza was the most economical bowler with one wicket for 30 in his 10 overs.

Overall, Zimbabwe A’s performance with the ball and in the field was inconsistent, much good work being mixed with the mediocre.

Mire and Chibhabha opened the batting for Zimbabwe A against the bowling of Cecil Pervez and Dhindsa.

Mire, after scoring a single from Pervez, pulled Dhindsa’s first ball superbly for four, but unaccountably nudged the next delivery to second slip, and Zimbabwe A were five for one.

Disaster loomed as, after scoring a single, the new batsman Raza went for a big hit but instead could only sky a catch to mid-on, again off Dhindsa; seven for two.

Chibhabha and Sean Williams, who surprisingly did not bowl in the Canadian innings, now had to consolidate urgently.

They did a fine job of it, playing with caution for a few overs before gradually opening up and seeing off the Canadian seamers.

The team fifty came up in the 13th over, and by now spinners were operating at both ends.

Chibhabha played the spinners well, which does not always happen, and Williams was looking in fine form until he overreached himself, leapt down the pitch to Dhaliwal, and was easily stumped for 43, scored off 50 balls; 91 for three.

Moor came in next and brought up the team hundred in the 24th over.

A stolen single brought Chibhabha a well-earned fifty off 74 balls.

Moor was soon making hay while the sun shone, and he hit one of Junaid Siddiqui’s leg-breaks on to the top of the roof of the Chairman’s Stand, and then the left-arm spinner Saad Bin Zafar into the stands at wide long-on.

Siddiqui went for another six over long-off, but Moor was burning his candle at both ends, and another big hit off Dhindsa resulted in a top edge and skyed catch to the wicketkeeper.

Chibhabha’s fine innings of 65 came to an end in the following over, as he moved down the pitch to drive Dutta, yorked himself and was stumped.

He hit five fours off 99 balls faced, and the score now of 165 for five in the 37th over left Zimbabwe A in potential trouble again.

Timycen Maruma and Malcolm Waller were now together, the required run rate seven an over.

The team 200 came up in the 42nd over as the batsmen attacked with success, four successive overs bringing 11 or more runs.

Only 18 were needed off the last six overs, but at 239 Waller, after scoring 37 off 25 balls, drove a hard low catch to mid-off off Dhindsa, who then yorked his cousin Nathan first ball.

Masakadza allowed the hat-trick ball to pass outside his off stump, and the situation now meant that the batsmen had no need for panic, but could gather the remaining 10 runs calmly as they came.

However, at 243 Maruma was brilliantly run out from a direct hit for 37 off 34 balls, calling for a risky single from Masakadza’s hit.

The score was 243 for eight after 47 overs — six runs needed in three overs, but with Mpofu and Chatara as the last two batsmen, nothing could be taken for granted.

Canada believed they could yet pull the match out of the fire, and were on their toes and full of excitement in the field.

Dhindsa bowled a tight wide past the leg stump to Masakadza, who then turned the ball through midwicket.

The ball neared the boundary, but with a desperate attempt the fielder chasing it managed to save the boundary — only for the batsmen to run four and level the scores, with two overs to go.

That ended the medium-fast Dhindsa’s 10-over spell, in which he collected five wickets for 53 runs.

Finally as an anticlimax another narrowly called wide to Mpofu settled the matter, and Zimbabwe A left the field victorious, but with a few things to think about.

The previous tour by Canada more than two years ago proved very popular, and an enthusiastic crowd of several hundred also attended this match and doubtless felt their time was well spent.