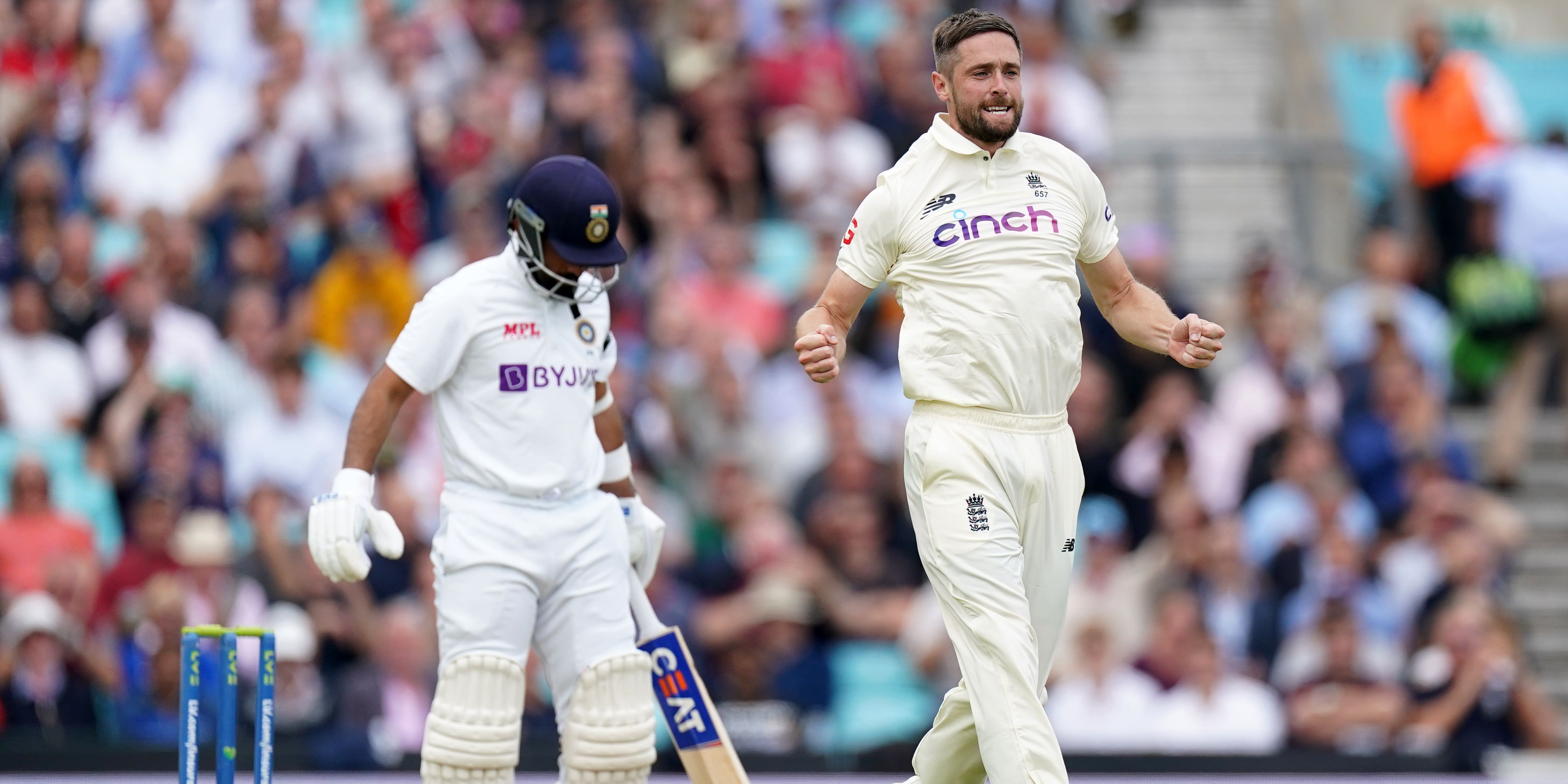 Chris Woakes made up for lost time on his return to England’s Test side, claiming four wickets as India were hustled out for 191 on day one at the Kia Oval.

Woakes was back in the side for the first time in a year, a period blighted by Covid-19 complications in Sri Lanka and injury issues, and showed just what the side had been missing.

He needed just six balls to open his account and finished with four for 55, with two dropped catches off his bowling.

India, who were thrashed by an innings at Headingley last week, were given a remarkable late boost by number eight Shardul Thakur, who made 57.

He launched an indiscriminate assault on the home attack, clubbing seven fours and three sixes as he stole Sir Ian Botham’s 35-year-old record for the fastest Test fifty on English soil.

He got there in 31 deliveries, pulling Ollie Robinson into the stands, to beat Botham’s effort at the same ground by a single ball.

But there was no doubting which side was happiest at the change over, England having dismissed the tourists in 61.3 overs for a very manageable score.

Joe Root had sent the tourists in with clouds overhead and a tinge of green under foot but doubts may have started to creep in during a sedate first half-hour.

James Anderson was pulled from the attack after conceding 20 from his first four overs, allowing Woakes an early look at the Indian openers.

After 11 matches and 12 months of waiting he was instantly on point, foxing Rohit Sharma with one that hooped away from his attempted cover drive and then thumping the shoulder of the bat after getting a shorter one to kick off the pitch.

Jonny Bairstow, donning the gloves again in Jos Buttler’s absence, did the rest as Woakes enjoyed some long-awaited celebrations.

Having made the breakthrough on 28, England kept India locked on that score for seven overs as Woakes and Robinson stitched together a long sequence of 42 dot balls.

Each one upped the pressure and Robinson cashed it in when he pushed his natural length a fraction fuller and nipped it back into KL Rahul’s front pad. A close lbw call went in the bowler’s favour, full and fair reward for a wonderful spell of 8-6-8-1.

Anderson returned with the express intention of reopening his decade-long battle with Virat Kohli but instead had to content himself with the scalp of Cheteshwar Pujara, poking at a straightener.

India resumed on 54 for three at lunch, with Kohli getting started in the afternoon with a sweet cover drive for four to reach 22.

That was almost his last act, with Woakes finding the edge only for a misunderstanding between Rory Burns and Root in the cordon to offer him a reprieve.

With Woakes nagging away at the Pavilion End, Root soon had the chance to make amends and he held on to Ravindra Jadeja at ankle height. The all-rounder had surprisingly been promoted to number five, but a nervy 10 hardly represented a success.

Kohli was beginning to impress now, rediscovering his strut in the middle and unfurling a handful of crisp blows through cover and point.

He also encouraged Ajinkya Rahane to overturn an lbw verdict against Woakes, but shortly after raising his bat for a half-century, he was on his way back.

After watching Robinson hang a handful of deliveries outside off stump, he was tempted in by a tighter line and edged through to Bairstow as he aimed for midwicket.

Rahane and Rishabh Pant were both unable to offer the resistance India needed, the former edging Craig Overton to gully and the latter guilty of an irresponsible hack off Woakes.

India eventually found their mojo in the form of Thakur, who swung his bat with impunity and despatched all comers. Woakes, Overton and Robinson all wound up in his hitting arc as he cleared the ropes on three occasions and rode his luck gleefully in between.

His fun came to an end on 57 when Woakes insisted on referring an lbw decision, the first of three wickets in four balls as Jasprit Bumrah and Umesh Yadav came and went in the blink of an eye.