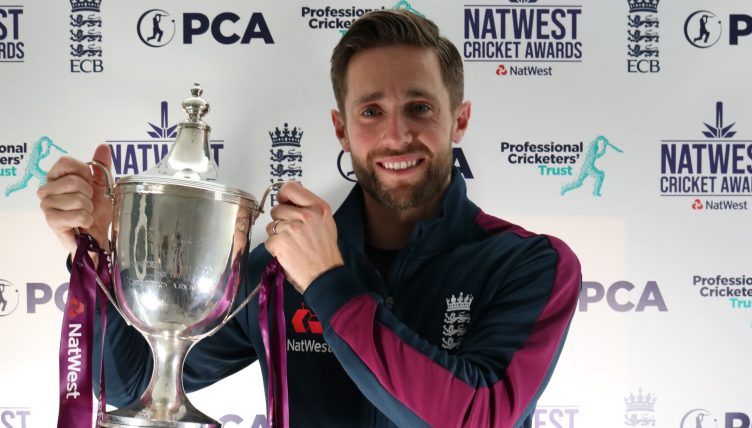 England’s ‘Mr Dependable’ Chris Woakes has been named as the Professional Cricketers’ Association men’s player of the year, with Zak Crawley and Sarah Glenn also honoured.

Woakes was handed the nickname by Test captain Joe Root earlier this summer, but his consistently impressive performances were noted throughout the game as the 31-year-old succeeded Ben Stokes to pick up an annual award voted for by players up and down the country.

Often seen as the unsung hero of England’s bowling attack when playing alongside the likes of James Anderson, Stuart Broad and Jofra Archer, Woakes was outstanding in Test series against the West Indies and Pakistan as well as three ODIs versus Australia, claiming 23 wickets in total.

He also played a brilliant, matching-winning innings of 84 not out in a decisive run chase against Pakistan at Emirates Old Trafford to showcase his all-round ability.

Crawley, 22, was feted as the Vitality PCA young player of the year following a breakthrough year which he capped with an unforgettable 267 against Pakistan, while 21-year-old leg-spinner Glenn scooped the prize for NatWest PCA women’s player of the year.

Ongoing restrictions around public gatherings mean the ceremony was a virtual one this year rather than the usual mass celebration, but Woakes might have been an unlikely attendee anyway having welcomed his second daughter Evie to the world on Thursday morning.

“It’s all a bit of a whirlwind, there’ll be a lot of nappy changing and Dad duties over the next few weeks and then I’ll get back into a bit of cricket,” he said.

“It’s been a really nice summer. It’s really nice to get this recognition. The fact that this award is chosen by your fellow professionals – the players you play with and against, not just this year but throughout your whole career, is really nice.

“I don’t always get the limelight, which I’m perfectly happy with. But with such a strong England squad available, to have performed the way I did across the Test stuff and then followed it up with a few good performances across the ODIs has maybe nudged it my way.

“I think the most important thing for me is that I’m contributing to England wins. So the fact I played a decent innings at Old Trafford to win the Test up there stands out as one of the highlights of the summer. Maybe that swayed the vote.

“It’s really a really great accolade for myself and really pleasing.”

Glenn only made her international debut in December but has risen sharply to establish herself in Heather Knight’s side and was named player of the series in the 5-0 T20 whitewash over the West Indies.

“It’s an honour to win. It’s pretty special that it was voted for by the girls, knowing that they’ve got my back,” she said.

“It’s taken me by surprise as well how quickly things have escalated.”

“There’s so many great names on the trophy already, so it’s very special,” said the Kent batsman.

As well as handing out gongs, vital funds are being raised for the PCA Trust, the charitable wing of the players’ body which is facing an estimated GBP 250,000 shortfall as a result of the coronavirus pandemic.