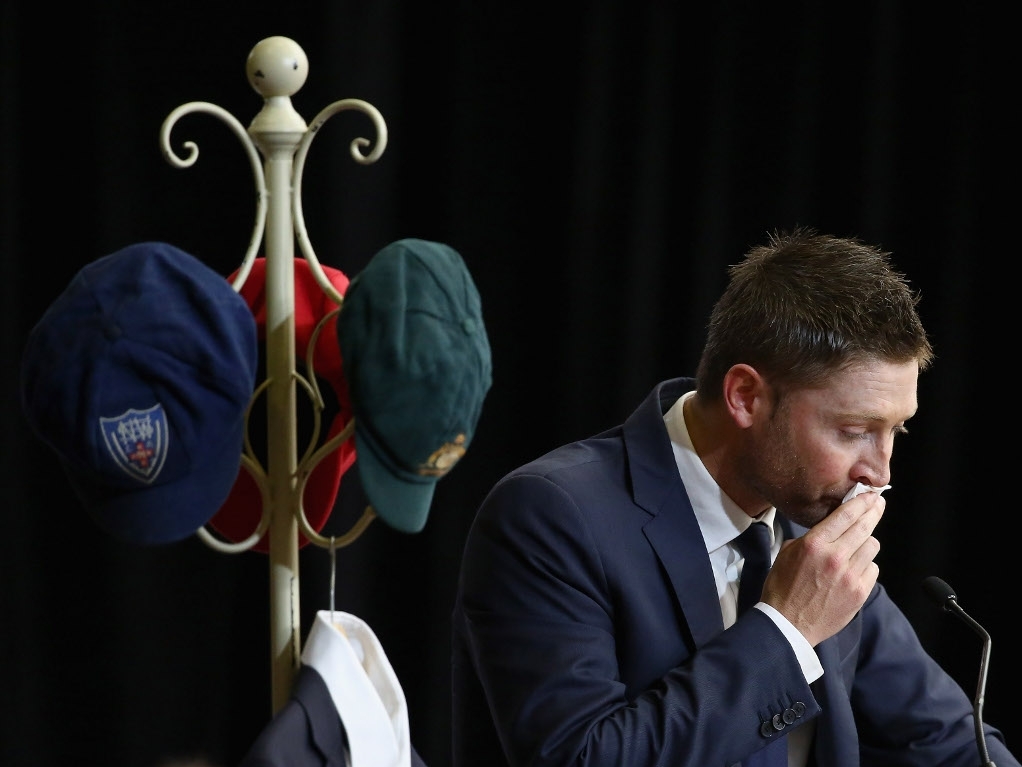 Australia captain Michael Clarke delivered a moving eulogy on Wednesday at the funeral of Phillip Hughes, with the skipper speaking about his friendship with the young batsman, who died last week.

The funeral we held in Macksville, the small town in northern New South Wales where Hughes grew up on a banana farm. Clarke had been at the hospital for most of the time between Hughes getting struck by a bouncer, and his death two days later.

Here is his tribute to his 'little brother'.

"I'm deeply honoured to have been asked by Phillip's family to speak today. I am humbled to be in the presence of you, his family, his friends and his community. He was so proud of Macksville and it is easy to see why today.

"Taken from the game, his family and loved ones at the age of just 25, he left a mark on our game that needs no embellishment. I don't know about you, but I keep looking for him. I know it is crazy but I expect any minute to take a call from him or to see his face pop around the corner. Is this what we call the spirit? If so, then his spirit is still with me. And I hope it never leaves.

"I walked to the middle of the SCG on Thursday night, those same blades of grass beneath my feet where he and I and so many of his mates here today have built partnerships, taken chances and lived out the dreams we paint in our heads as boys.

"The same stands where the crowds rose to their feet to cheer him on and that same fence he sent the ball to time and time again. And it is now forever the place where he fell. I stood there at the wicket, I knelt down and touched the grass, I swear he was with me. Picking me up off my feet to check if I was okay. Telling me we just needed to dig in and get through to tea. Telling me off for that loose shot I played. Chatting about what movie we might watch that night. And then passing on a useless fact about cows.

"I could see him swagger back to the other end, grin at the bowler, and call me through for a run with such a booming voice, a bloke in the car park would hear it. The heart of a man who lived his life for this wonderful game we play, and whose soul enriched not just our sport, but all of our lives.

"Is this what indigenous Australians believe about a person's spirit being connected with the land upon which they walk? If so, I know they are right about the SCG.

"His spirit has touched it and it will forever be a sacred ground for me. I can feel his presence there and I can see how he has touched so many people around the world. The tributes to him from cricket lovers kept me going.

"The photos, the words, the prayers and the sense of communion in this loss from people across the globe have shown me his spirit is in action. It has sustained me and overwhelmed me in equal measure. And the love of my band of baggy green and gold brothers and sisters have held me upright when I thought I could not proceed.

"His spirit has brought us closer together – something I know must be him at work because it is so consistent with how he played and lived. He always wanted to bring people together and he always wanted to celebrate his love for the game and its people.

"Is this what we call the spirit of cricket? From the little girl in Karachi holding a candlelight tribute to masters of the game like Tendulkar, Warne and Lara, showing their grief to the world, the spirit of cricket binds us all together. We feel it in the thrill of a cover drive. Or the taking of a screamer at gully, whether by a 12-year-old boy in Worcester or by Brendon McCullum in Dubai. It is in the brilliant hundred or five-wicket haul, just as significant to the players in a Western Suburbs club game as it is in a Test match.

"The bonds that lead to cricketers from around the world putting their bats out, that saw people who didn't even know Phillip lay flowers at the gates of Lord's, and that brought every cricketing nation on earth to make its own heartfelt tribute.

"The bonds that saw players old and new rush to his bedside. From wherever they heard the news to say their prayers and farewells. This is what makes our game the greatest game in the world. Phillip's spirit, which is now part of our game forever, will act as a custodian of the sport we all love.

"So rest in peace my little brother. I'll see you out in the middle."