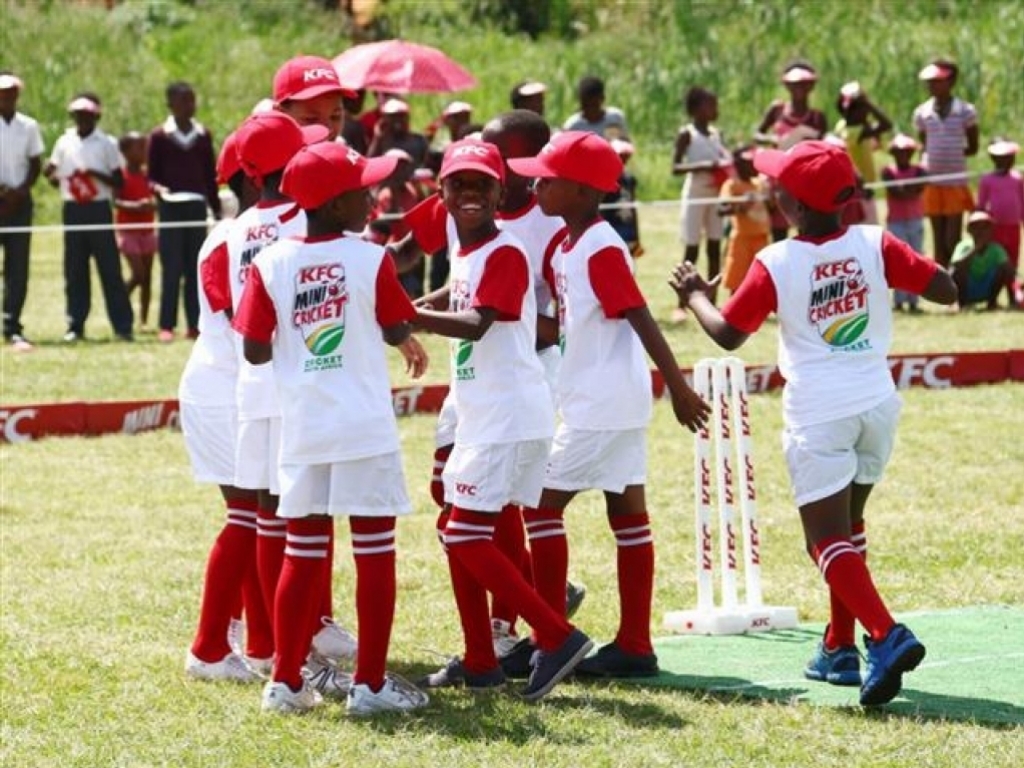 Cricket South Africa (CSA) celebrates 35 years of one of the country’s most famous and prestigious sporting development programmes in the 2017/18 season – Mini-Cricket.

An estimated 180 delegates have assembled at the Champagne Sport Resort in the Central Drakensberg for the annual KFC Mini-Cricket national seminar from 3-5 July 2017 ahead of the celebratory season.

KFC has been the driver of the initiative for the past seven years after taking over from biscuit brand, Bakers.

“This year will be another year to rejoice as we look forward to the seventh year of a distinguished partnership with KFC,” CSA chief executive officer Haroon Lorgat said.

“Looking back at what has been achieved over the past seven years is outstanding when one looks at the stunning growth figures.

“It is also worth celebrating that 12 of the 15 members of our ICC U/19 World Cup winning team in 2014 came through this programme.”

Launched during the 1982-83 cricket season to encourage the growth and development of cricket amongst boys and girls, Mini-Cricket has grown in leaps and bounds over the years giving children from all walks of life the opportunity of being exposed to the game.

Over 2.5 million kids have participated in this programme, which has been instrumental in producing players for the various national teams – South Africa U/19, Momentum Proteas, South Africa A and the Proteas.

“I really feel that the KFC Mini-Cricket programme is one of the best and most heart-warming projects that can be seen anywhere in the world,” Lorgat added.”

“It shows in the growth and in the opportunities provided to young children who take part as ball boys or girls when their Protea heroes are playing, or as participants at the coin toss of the KFC T20 International matches or the CSA T20 Challenge matches.”

“KFC is immensely proud of its contribution to the KFC Mini-Cricket programme and of the positive impact it is having on countless people all over South Africa.

“With the help of our valued partners, Cricket South Africa, the coaches and co-ordinators, the programme will continue to thrive, uplift people and communities.

“The KFC Mini-Cricket National Seminar is a great platform for us to celebrate the coaches who are the heart of KFC Mini-Cricket,” said KFC Public Affairs Director, Thabisa Mkhwanazi.

“The 2016/17 season proved to be the biggest and was jam packed full of action with almost 120 000 kids getting active,” adds Mkhwanazi.

The seminar features KFC Mini-Cricket Coaches from all of CSA’s members around the country.

Delegates attending this year’s seminar will once again be exposed to variety of topics and key learnings which they can take back to their regions to share with fellow coaches to ensure the program improves each year and delivers on the objectives.