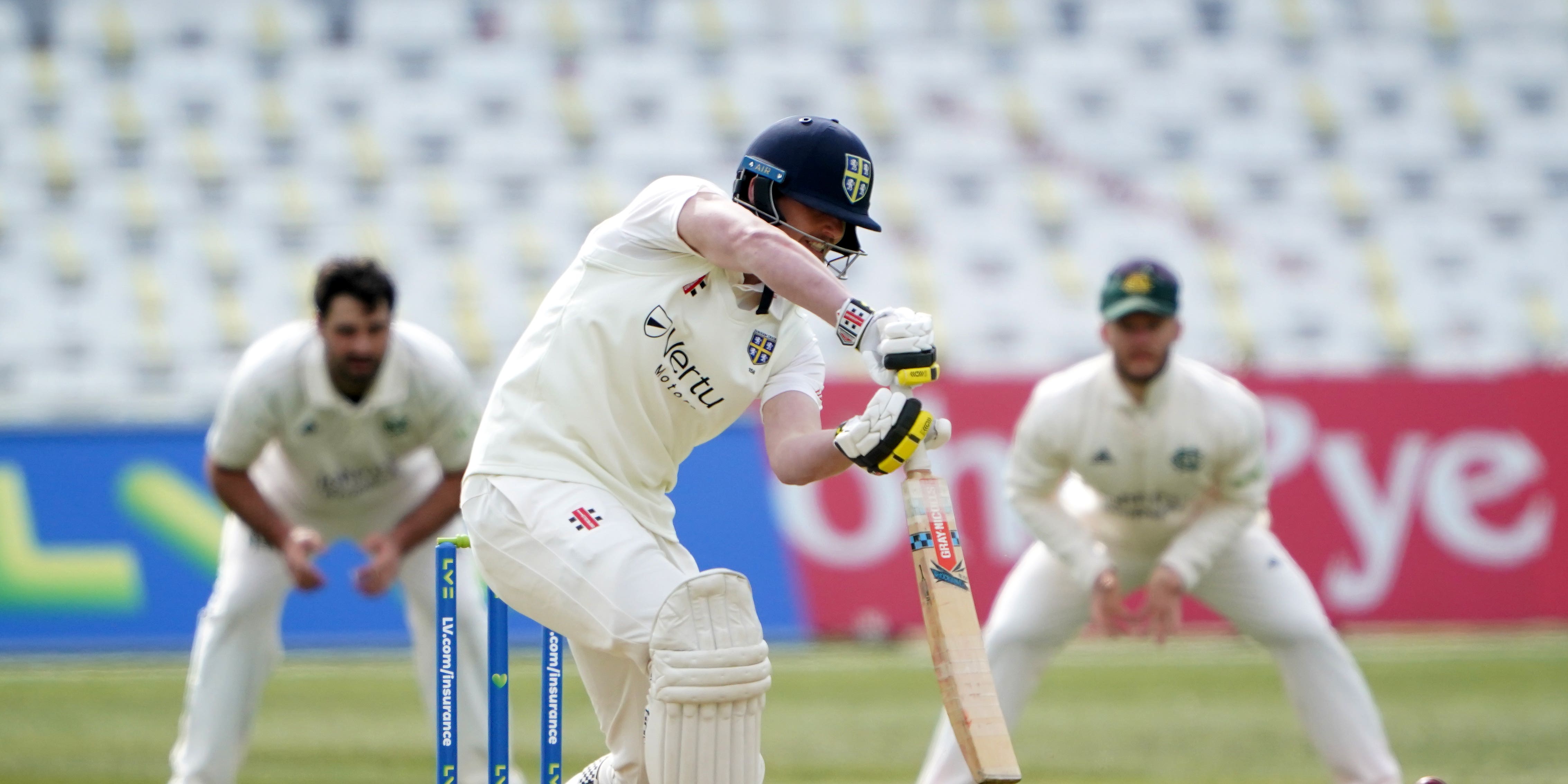 David Bedingham propelled Durham into a position of strength with his third century of the season in the LV= Insurance County Championship against Worcestershire at New Road.

The competition’s leading run scorer hit a chanceless 121 to take his tally for the summer to 787 at an average of 71.54.

Bedingham and Michael Jones (78) shared a fifth-wicket stand of 171 to help Durham to 381 all out and a first-innings lead of 250.

Worcestershire rallied after a disappointing first session, in claiming six wickets for 76 to secure maximum bowling points with Josh Tongue returning four for 73 from 25 overs.

But there is still sufficient encouragement in the pitch for the bowlers and Matthew Potts picked up two wickets as Worcestershire limped to 99 for three by the close despite an unbeaten Jake Libby half-century.

Teenager Dan Ibrahim impressed with a half-century on his Sussex debut before Dawid Malan’s unbeaten 103 put Yorkshire on top during at Emerald Headingley.

All-rounder Ibrahim – aged 16 years and 299 days – moved from 37 overnight to 55 in Sussex’s first-innings 313 before lunch to become the youngest-ever half-centurion in the County Championship.

Malan, in his first county appearance of the summer, then steered Yorkshire’s reply of 272 for two from 74 overs, while Gary Ballance also made 74 not out.

Ibrahim is one of six English 16-year-olds to score fifties in first-class cricket in this country, but only him and Bilal Shafayat have achieved the feat in the Championship.

Group Two leaders Gloucestershire are in danger of slipping to a second consecutive defeat after Leicestershire took firm control.

After seeing their points advantage shrink when they were beaten heavily by Surrey last week, Gloucestershire were bowled out for 158 in reply to Leicestershire’s 451 as left-arm spinner Callum Parkinson – seemingly none the worse for a painful blow on the left forearm while batting – took five for 45 on a turning pitch with the added hazard of variable bounce.

Parkinson struck again after skipper Colin Ackermann enforced the follow-on, having Chris Dent caught at slip in the last over of the day, and Gloucestershire will resume on five for one, needing a further 288 to make Leicestershire bat again.

Only opener Miles Hammond, who made 67, offered profitable resistance in their first innings and there were three wickets also for Ackermann’s off-spin.

Glamorgan are well placed to claim a second Championship win of the season on another eventful day in their match against Lancashire in Cardiff.

The visitors started the day the happier of the two teams, but a collapse let Glamorgan back into the match as Lancashire were bowled out for 164 in their second innings.

Joe Cooke and David Lloyd put on the highest stand of the match so far as Glamorgan reached the close at 137 for three with 51 runs needed for victory.

While Glamorgan will feel that victory is not too far away the regularity with which wickets have fallen in this match means that an unlikely Lancashire win cannot be ruled out.

At Derby, Warwickshire pace bowlers Craig Miles and Liam Norwell demolished Derbyshire before the home side hit back strongly.

The pair shared nine wickets to skittle Derbyshire for 121 but, after
Warwickshire chose not to enforce the follow on, Michael Cohen took three for 26 as the visitors collapsed to 132 for seven, a lead of 285.

Miles took five for 30, including a post-lunch spell of three for five in five
overs, and Norwell four for 24 as Derbyshire’s last eight wickets fell for 45 in
14 overs.

The day’s wicket count reached 18 despite Sam Hain’s 46, but Warwickshire are still favourites to complete a fourth victory in Group One.

The wicketkeeper walked to the crease with his side 110 for five and trailing by 250 on first innings before contributing 91 not out and helping them close on 285 for seven.

Sam Northeast made 67, while a disciplined Somerset bowling performance brought three wickets for Josh Davey and two each for Marchant De Lange and Tom Abell.

No play was possible on day two of Essex and Nottinghamshire’s crucial clash at the Cloudfm County Ground due to rain, while the wet weather also saw the abandonment without a ball being bowled on day two of Kent’s game with Northamptonshire at Canterbury.