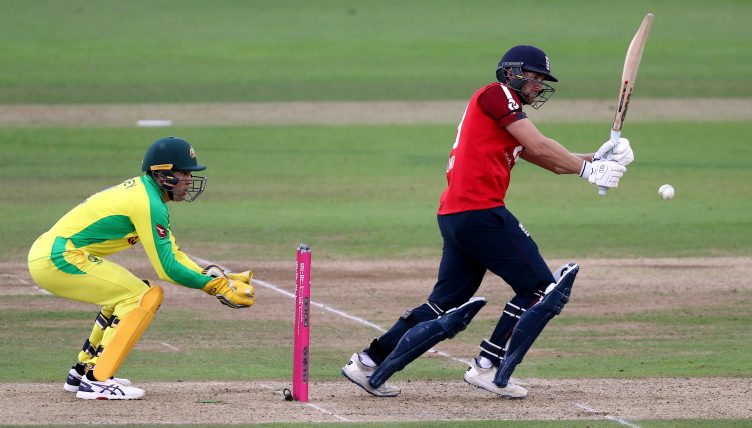 Dawid Malan rescued England with 66 to help set Australia 163 to win the first of three Twenty20 internationals at the Ageas Bowl.

The hosts looked on course for a big total when Jos Buttler breezed to 44 off 29 balls, but his tame dismissal at 64 for one sparked a collapse.

Tom Banton, Eoin Morgan, Moeen Ali and Tom Curran all went cheaply, but Malan remained and moved to his eighth score of fifty or more in only 14 T20 internationals.

Kane Richardson eventually ended his 43-ball stay on his way to figures of two for 13 and he was well backed up by Glen Maxwell, who claimed two for 14 to show why Aaron Finch’s side are number one in the sprint format.

Australia won the toss and bowled first with Buttler, Jofra Archer and Mark Wood returning to play white-ball cricket for the first time this summer after previously being part of the bio-secure Test bubble.

This was Buttler’s first T20 match since February but it was like he had never been away as he smashed Ashton Agar for two maximums in the second over.

Mitchell Starc suffered similar punishment, with the England opener finding the boundary twice more to move onto 35 from 15 balls.

Jonny Bairstow had got off the mark with a drive for four through extra cover, but he went for eight when he edged Pat Cummins to Starc at short third man.

Australia captain Finch decided to bring Agar back into the attack despite his first over going for 16 and it proved inspired when he dismissed Buttler.

The opener, who had seen his scoring slowed, could only pick out Cummins at mid-wicket to depart for a 29-ball innings of 44.

Banton came to the crease at number four instead of his usual position at the top, but showed his confidence early on with a reverse sweep to the boundary off Zampa.

Agar continued to claw back his figures with a second wicket and yet he was indebted to a wonderful piece of fielding from Finch.

Banton’s sliced shot looped up in the air but Australia’s captain made up plenty of ground to take the catch at short extra cover. England’s skipper Morgan did not last long and it left the hosts on 92 for four.

Malan remained unflustered and crunched Zampa for six before he ended an expensive over with a pull for four to move onto 38 off 27.

England had brought up their hundred by this point but Australia continued to get wickets and Ali went for two when he reverse-swept Agar straight to Zampa at third man.

Curran joined Malan at the crease and the pressure exerted by the economical Maxwell forced him to go for the big shot off Richardson, but he could find Agar at deep cover.

Malan did manage to go to fifty and upped the ante to take 22 off Zampa’s final over, smashing back-to-back maximums.

Richardson ensured he did no further damage when the Yorkshire batter could only pick out Smith, who ran in to take a fine catch at long off.

Chris Jordan managed to end the innings with a boundary to finish on 14 not out and help England get up to 162 for seven, meaning Australia need 163 to win the first T20 match of the series.