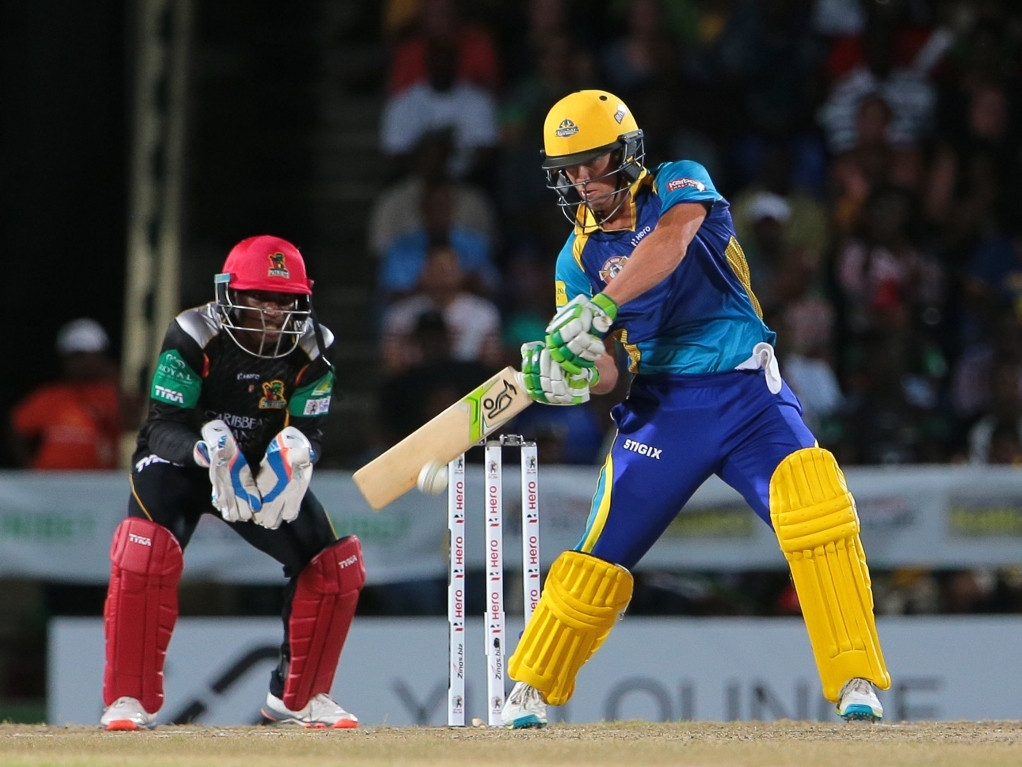 A game that was full of ebbs and flows at Warner Park, St Kitts saw the Barbados Tridents claim victory over the St Kitts & Nevis Patriots in the Caribbean Premier League.

Fifties from Shoaib Malik and AB de Villiers helped the Tridents to chase down a target of 163, but there were times where the game could have gone either way.

This was the third defeat in four home games for the St Kitts & Nevis side who have had a very disappointing series of games at Warner Park. In all of their matches they have competed throughout but one win is all they could manage.

They will be hopeful of better returns on their travels over the coming weeks.

The Tridents chase was begun by Shoaib Malik who was promoted to open having batted at three in the Tridents opening fixture, and he did a fine job of anchoring the Bajan chase. Despite two early wickets, Malik held firm to make sure there was no panic.

The first of those wickets came when Steven Taylor edged Thisara Perera to the wicket-keeper who could only parry the ball but the deflection looped up to Tabraiz Shamsi at point.

The second Trident to fall was Wayne Parnell who was pushed up the order to three and his stay ended when he a drove a ball from Perera straight to long on.

Malik fell for 54 (46) bringing together AB de Villiers, and Kieron Pollard with 55 runs needed from six overs. The two men made 58 in 28 balls to win the match for their team.

De Villiers finished on 63 (33), a welcome return to form for a man who had not passed 50 in seven innings before this match, an uncharacteristic lean patch for the South Africa skipper.

The Patriots had an eventful start to their innings when they won the toss and elected to bat. The very first ball was top edged by Lendl Simmons off the bowling of Parnell but Imran Khan could not hold on to a swirling catch at fine leg. The very next ball there was an appeal for caught behind against Simmons which the umpire gave out.

Parnell picked up another wicket in his next over, this time the St Kitts & Nevis captain was the man dismissed – Faf du Plessis caught in the deep.

JJ Smuts was brought into the side in the place of Brad Hodge and he too departed inside the batting PowerPlay, bowled around his legs by Shoaib Malik to leave the Patriots struggling at 40-3 after six overs.

While wickets were falling at the other end Evin Lewis continued the fine form that saw him score a match-winning 73 in the Patriots last match against the St Lucia Zouks.

Here he made a 32-ball 50 as he top-scored for his team for the second successive match, combining with Jonathan Carter in a partnership that was worth 54. Lewis departed caught in the deep attempting to hit his third Maximum but he was well caught by AB de Villiers at deep mid-wicket.

Carter picked up the pace when Lewis left, but he should have been dismissed on 26 when Ashley Nurse dropped a straightforward catch at long-off.

He made the most of his life as he hit three sixes on his way to 41 as the Patriots managed 162-8, a decent total but not one that they could defend.