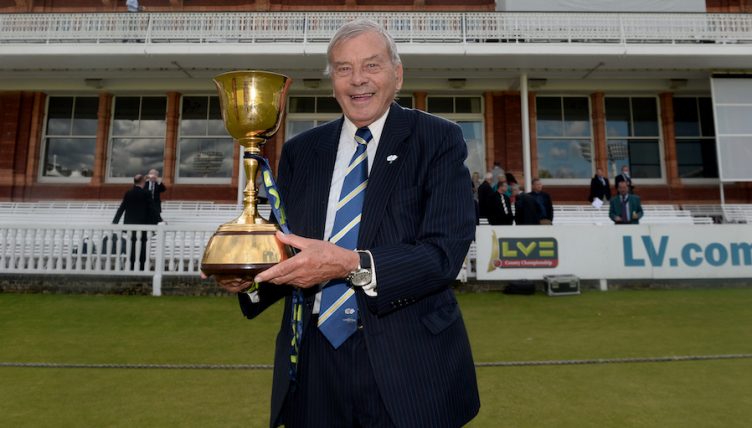 Former Yorkshire president Dickie Bird believes that the White Rose have a squad that can compete for multiple trophies domestically this season.

Having not won a trophy since 2015, the pressure is on Andrew Gale, Steven Patterson and co. to deliver silverware for one of the most expectant fanbases in English cricket.

However the general consensus is that Yorkshire could once again be the benefactors of their academy production line, with the likes of Harry Brook, Josh Shaw, Jack Shutt, Jared Warner, Matthew Waite and Jordan Thompson among those tipped for success this term.

“Well looking at them, the lads and the staff, I think they could be close to winning the Championship this year, if they keep fit” Dickie told our writer Oli Fisher, in typically optimistic fashion.

“We’ve got some magnificent young players here at Yorkshire. We’ve got four spin bowlers any other county would be proud to have. We’ve got [James] Logan, Shutt the off-spinner, [Karl] Carver the leg-spinner and then we’ve got the leg-spinner from Warwickshire [Josh] Poysden.

“That’s four good young spin bowlers there, and our seam attack if they keep fit – we’ve got the South African [Duanne Olivier] and [Ben] Coad as well.”

It was as if Dickie had glimpsed into the future somewhat, as Waite took 5-16 from 12 overs just two days later during the first day of Yorkshire’s game against Leeds/Bradford MCCU at Weetwood.

"I found it really tough to come back from that. I don't think I've been the same player since."https://t.co/v3dTR1vDwg

“Also, I’m a tremendous admirer of Matthew Waite. I like this boy, he’s made of steel this lad, and a great temperament. You never know with youngsters they could fall by the way side, but I think he could go all the way and play for England.”

Attention then turned to Yorkshire’s seam attack for this coming campaign, which on the face of it is well set after the addition of Duanne Olivier.

“I think he [Duanne] will be a tremendous addition. I’ve only seen him on the television bowling in the Test matches in South Africa, but what I’ve seen of him he looks a fine bowler to me this lad.

“As I said if they keep fit, with him opening the attack, Coad, Waite, Bresnan, Fisher. We’ve got a marvellous opening attack, and so many good players as back-up players.

“So the squad, as I see it, looks very very rosey this season – if they keep fit.”

There is plenty of excitement surrounding 20-year-old top order batsman Harry Brook, who has appeared for England’s U19 side and has been tipped by many to follow Joe Root’s footsteps into the senior side.

“I’m a tremendous admirer of Harry Brook of course, and I think he has a great chance of playing for England,” Dickie said. “He’s a great player this lad; so much time, he has magnificent balance and his foot movement is excellent.

“He had an up-and-down season [last season], but he’ll play in the side I’m sure, and I think he could go all the way.”

There they all are. All the lads. pic.twitter.com/RgZxQ6hmnc

Keeping the squad healthy in 2019 was very much the basis of Dickie’s optimism, with the squad having been ravaged by injuries last time out which seemed to hamper any momentum that was being generated.

The side eventually escaped a relegation battle in the County Championship, and had mixed fortunes in white ball cricket – making the semi-finals of the One-Day Cup but falling short once again, and failing to get out of their group in the T20 Blast.

This season though, things could be a lot different.

“Everything at the moment is looking well, and I look around at the squad at the moment and think to myself, ‘If these lads stay fit, in all formats, we could win trophies this year’. But of course weather will play a big part as well, but it’s looking good.

“We’ve got Joe Root for the first two games, and Rashid is bowling magnificently. He has come on so much over the winter – I’ve seen so much improvement in the lad, watching him on television he’s bowling so well.”

As we stood out on the hallowed Headingley turf under glorious sunshine, there was a new imposing structure at one end of the ground, with the new stand at the rugby ground end nearing completion.

The stand is part of a five-phase redevelopment plan which started in 2015 and is expected to take up to 20 years, and will drastically change the landscape from it’s current form.

“It’s made a tremendous improvement hasn’t it? This is one of the best Test grounds in the country now, it stands out a mile.

“There’s so many good Test grounds, you’ve got to live with the times and do these alterations, but it looks magnificent in the sunshine today.”

The final word had to go to the Scarborough Festival – a coveted part of the Yorkshire season since 1876. This year, Nottinghamshire will roll into North Yorkshire for the second of two four-day games to be played at North Marine Road this season.