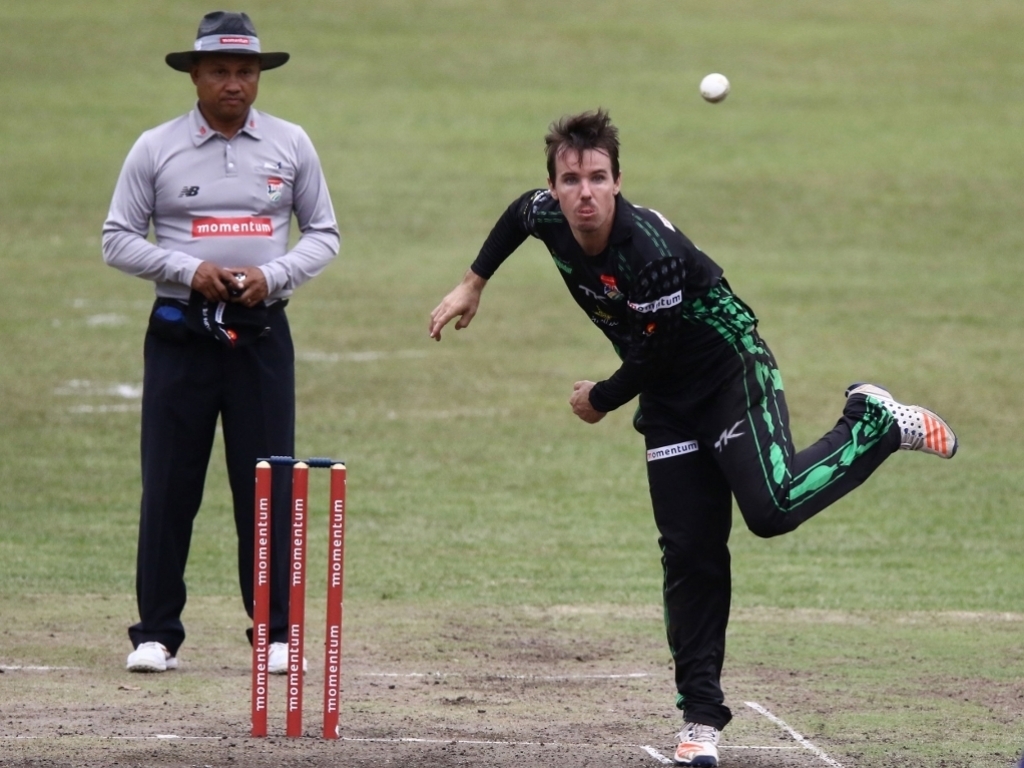 A strong all-round display by the purple-clad Dolphins on Wednesday saw them claim a significant seven wicket bonus point win over the Knights in the Momentum One Day Cup at the Manguang Oval.

The win sees the Dolphins climb to the top of the Momentum One Day log, leapfrogging the Titans into the pound seat as the halfway mark of the tournament fast approaches.

The Knights got off to a terrific start after winning the toss and batting first when the new ball was hard and the field was up. Opener Diego Rosier took a liking to Mthokozisi Shezi as the left-arm seamer took some tap from the young opener as the Knights notched up 47 from the first six-and-a-half overs.

Dolphins skipper Zondo picked up early the need for spin on the Mangaung Oval wicket and after Rob Frylinck nabbed the first wicket for the visitors the left-arm spin of player-of-the-match Kyle Nipper was introduced.

Nipper’s first wicket was that of Grant Mokoena for 18 and after that the 29 year-old got into a sumptuous groove as he compiled a devastating spell of left-arm othodox spin.

A partnership developed between the experienced heads of Rudi Second and Piet van Biljoen before the former was undone by a second splendid delivery from Nipper that saw him play around a flighted delivery and get bowled.

The Dolphins then took the innings by the scruff of the neck and the trio of Nipper, debutant Senuran Muthusamy and Prenelan Subrayen took control of affairs and were responsible for eight of the ten wickets to fall.

After Subrayen took the prized scalp of captain Van Biljoen the men from Durban continued to strike regularly with Muthusamy snaffling his first two Momentum One Day Cup scalps and Subrayen chipping in with two of his own.

Skipper Zondo got in the act with a caught and bowled before Nipper picked up his fourth and career best figures of 4/34 when he had Leus du Plooy caught brilliantly by Cody Chetty on the fence to wrap up the innings.

The Knights had capitulated from 128/2 to 171 all out, losing the last eight wickets for 43 runs.

Van Jaarveld bludgeoned his way to 71 from 47 deliveries before he was unfortunately run out, however his opening stand of 103 with Morné van Wyk (33) set up the Dolphins’ chase and broke the back of the Knights’ defence.

Vaughn van Jaarsveld led the charge with the bat as he put the Knights bowlers under significant pressure early on in the home sides’ defence of an under-par 171.

A slight wobble in the middle of the chase might have given the Knights some semblance of hope however captain Zondo finished with 43 not out from just 34 balls to quash any ideas the side from the Free State might have had of making a comeback.

The Dolphins continue their road trip with a trip to Port Elizabeth this Friday for a showdown with the Warriors.