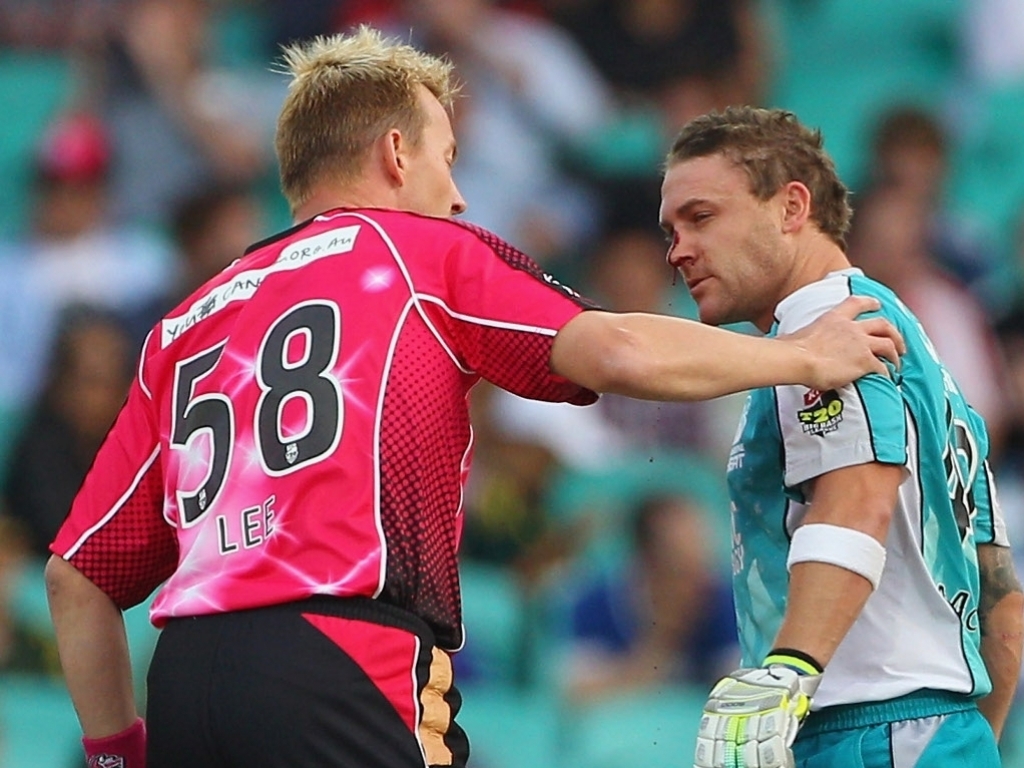 The evolution of batsmen not wearing helmets at all to wearing some of the safest equipment around has reduced the incidents of serious injury drastically, while short-pitched bowling has continued, and will continue, to be used as a weapon.

Thankfully, the degree of seriousness has very rarely resulted in hospitalisation, though when that does happen it's a sobering reminder of how dangerous the game can be, and our thoughts are with the players involved.

Here are a few instances of bowlers getting the better of batsmen. Out of respect, you'll have to look for the videos and pictures on your own.

New Zealand tail-order batsman Ewen Chatfield forever changed the way he batted after being struck on the temple by England paceman Peter Lever. 'Chats' wasn't wearing a helmet at the time, and as was the tradition against the tail, Lever went full throttle.

A short ball reared up and struck Chatfield on the temple, without any protection. He staggered away before collapsing on the square, and the fielders rushed to his side. He swallowed his tongue and later stopped breathing, but was saved by physio Bernard Thomas, who realised what was happening.

After wards, Chatfield said it wasn't really a bouncer, more a short ball he didn't have the skill to get away from. He also never came out to bat without a helmet again, and decades later, as a 'seniors' player, still used it.

The World Championship of Cricket in 1985 was held in Australia, and the West Indies faced Sri Lanka in the group stage at the MCG. Two Windies batsmen had to retire hurt after being struck in the face off the uneven deck.

Richie Richardson was first, as a ball ripped up from Ashantha de Mel and hit him on the mouth while he played a pull shot. He walked away spitting blood, and was not wearing a helmet at all, let alone one with a grille.

In came Larry Gomes, who did not learn from Richardson's mistake and was also helmetless. He was also hit in the face, this time by Rumesh Rathnayake, on the cheekbone. The bowler was visibly upset as Gomes left the field off his own steam.

South Africa were only just back to international cricket after isolation, and were thus not used to India paceman Javagal Srinath's brand of bowling. Pringle, a rather tall man, swung at a bouncer and missed, to his detriment.

The ball snuck a top edge off the gloves and smashed into his helmet, under the peak and onto the cheek under the left eye. Pringle quickly went down and the India players turned him onto his side. He was transferred onto a stretcher and taken to hospital, where scans showed a fracture to his orbital bone.

Pakistan express paceman Shoaib Akhtar was not a pleasant prospect to face, as South Africa opener Gary Kirsten discovered in a 2003 Test. Akhtar came around the wicket to the left-hander, dropped it very short and into the body.

Kirsten was already turning his head, but couldn't get out of the way as the ball hit his cheek, and only the chin strap kept the helmet on his head. He stumbled away, removing the helmet to show blood and a swollen cheekbone.

West Indies batting legend Brian Lara fared little better a year later, this time in an ODI. It was the semi-final of the World Cup, and Shoaib sent down a rocket right at Lara, who turned his head and the ball hit the back of his head, under his helmet. He went down immediately, but was able to get up and walk off the field.

Former Australia fast bowler Brett Lee is no stranger to inflicting damage. One notable earlier instance was when a bouncer hit England batsman Alex Tudor on the side of the helmet, spinning the helmet off his head.

Tudor ducked into the ball and looked away, it wasn't that short, but at Lee's pace it was night impossible to get away from. Tudor spun around and dropped his bat near the stumps as the fielders rushed to his aid. He was carried off the field on a stretcher to much applause.

Another instance, when Lee was bowling against the West Indies, demonstrated the value of the helmet as Devon Smith was struck flush on the side of his head at 150kph. He walked away and sat down, and continued to speak to Lee, who was checking if he was Ok. Smith stood up and continued.

More recently, in 2013, Lee was going up against Brendon McCullum in the Big Bash League, and after beating the bat a few times, Lee got aggressive. he sent a bouncer arrow straight and it went through B-Mac's peak and grill, onto his nose. McCullum stayed standing though, but had to go have his bleeding face stitched up.

Australia opener Justin Langer was playing in his 100th Test, and the first ball of the innings saw him smashed on the head by South Africa paceman Makhaya Ntini. The ball hit him on the side of the helmet and brought him to his knees.

Langer sat down heavily as players and support staff rushed to help, and he was white was a sheet and closed his eyes as Alex Kountouris wiped away the blood from his neck. He walked off, but had a concussion.

The Australia fast bowler was an exciting addition to the side and he was bowling at 155kph-plus. South Africa's AB de Villiers had just come to the crease, and Tait's pace baffled him. He thought the ball was going to come higher than it did, tried to pull it and missed.

The ball smashed into the point of his unprotected hip, and De Villiers spun around, hitting his wicket with the bat in the process. While Tait celebrated, De Villiers hobbled off using his bat as a walking stick, and a fracture was later discovered.

The most recent Test series between England and India saw paceman Broad get some speedy deliveries bowled back at him. India's Aaron was bowling with England's score already nearing 400, and sent down a snorter that Broad tried to pull.

The ball ended up between peak and grill though, and stayed there. Broad immediately called for help as he went onto his knees, and India's players rushed to help him, as the ball stayed on his broken nose.

Virat Kohli helped Broad remove the helmet, which set the blood pouring. A discussion followed about helmet construction, with Broad's helmet only having one bar across the face, while Chris Woakes, his batting partner, was shown to have a double grill.

Broad left the field and had to go for surgery later on, and was out of action for just a day or two, and was fit to play in the next Test. He did have to wear a nose guard though.