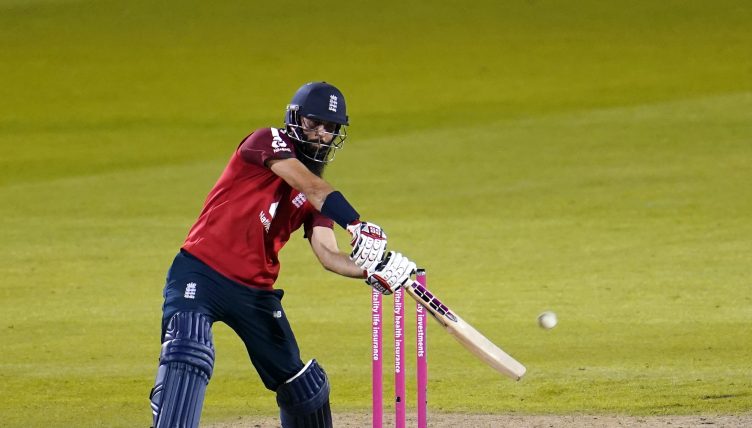 England all-rounder Moeen Ali attributed his recent slump to external criticism, which he has resolved to ignore from now on after a spectacular return to form in the final Twenty20 international against Pakistan.

Moeen had made just 10 runs in his previous four international innings this summer but a sensational 61 from 33 balls – featuring four fours and as many sixes – helped England recover from 69 for four in their pursuit of 191.

While Pakistan ultimately prevailed by five runs in a last-ball thriller at Emirates Old Trafford to square an entertaining series at 1-1, Moeen was relieved he was able to make a positive contribution.

Asked if there were any factors behind his low run of scores, Moeen said: “The outside noise more than anything, you can get sucked into that.

“I don’t like making excuses for myself and sometimes it’s more the outside noise, sometimes I think about what other people think of me lately.

“I know it’s only one game and I’m not going to get too far ahead but I won’t read what you guys write or what everyone else writes in general.

“I had to shift my mental state before this game, try and play like it’s my first few games for England again and be like that enthusiastic kid like I was when I first played.

“Criticism is part and parcel of the game and you have to take it on the chin.

“I probably got sucked up into it a little bit and probably got a bit comfortable in the side, maybe not thinking I was going to play every game but I feel like sometimes I let the team down and I try harder and it gets worse.

“That’s happened a few times but it’s almost just pressing the reset button and going again. I’ve got to enjoy playing for England, it’s a special team to be part of.”

Despite a downturn in fortunes, Moeen has been shuffled up the batting order to number five for these three matches, two spots higher than his usual position while he was asked to give the team-talk ahead of Tuesday’s game.

Having been the vice-captain for the 2-1 one-day international series victory over Ireland a few weeks ago, Moeen revealed his admiration and respect for England skipper Eoin Morgan for his continued support.

Moeen said: “To have that backing from the captain is amazing and it’s one of the reasons why he’s probably the best captain I’ve had.

“That gives a lot of confidence to know that even though I haven’t played that well over a good period of time now, for the captain to still think highly of me, for me it means a lot.

“(Doing the team-talk) makes me feel me quite special among the boys and a big part of this team.”

Moeen is still ready and willing to add to his 60 Test caps, having ended his exile in the longest format earlier this year, but he accepts Dom Bess, Jack Leach and possibly even Adil Rashid are ahead of him in the pecking order.

He added: “With me, it’s more about just playing the best cricket I can and trying to be in good form in all forms. If I get picked then brilliant but if not then there’s still a lot of cricket to be played.”

Pakistan finished their tour with a win, having been beaten 1-0 in Tests, while they ended England’s hopes of a sixth successive T20 series victory ahead of their limited-overs series against Australia, which starts on Friday.

Mohammad Hafeez top-scored in Pakistan’s 190 for four with 86 not out, while teenage debutant Haider Ali showed why he is one of his country’s hottest prospects with some formidable strokes in his 54 from only 33 balls.

Haider, 19, showed a penchant for the leg-side in his 100-run stand with veteran Hafeez, who hailed a team-mate 20 years his junior.

Hafeez told Sky Sports: “He was good under pressure and just expressed himself. It is great to see youngsters coming from our system and performing well.”