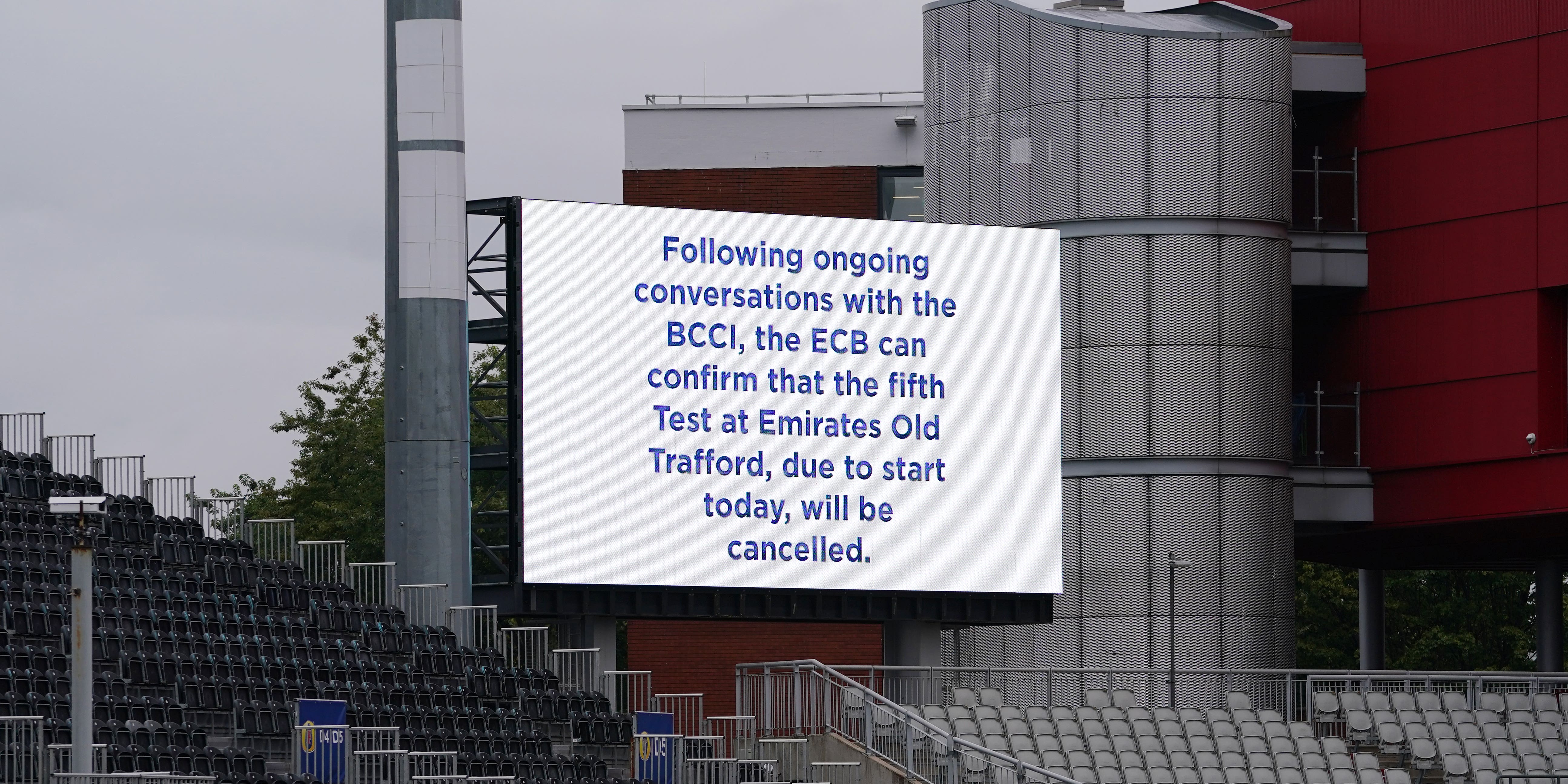 Officials from England and India were locked in damage limitation mode on Friday after the dramatic last-minute cancellation of the decisive fifth Test at Emirates Old Trafford.

A little more than two hours before the match was scheduled to start, and only a few minutes before the gates were due to open to a sell-out crowd of 22,000 fans, the game was cancelled due to Covid-19 concerns in the Indian camp.

The England and Wales Cricket Board initially said India had forfeited the match, an explosive conclusion which would have led to a 2-2 draw in the LV= Insurance series, but that wording disappeared quickly from a revised statement. The tourists later issued their own assessment suggesting their “strong relationship” with the ECB meant they had opened a dialogue around rescheduling the game.

That will not happen quickly, with the Indian Premier League starting back up on September 19 in the United Arab Emirates, and the likeliest window in a crammed calendar would be next summer. India are already due to travel for a six-match white-ball trip and a five-day detour in Manchester is under consideration.

That would be welcome news for Lancashire, who estimate a “multi-million pound loss” as a result of the cancellation and are already looking to the ECB to help them avert financial disaster.

Concerns over the fate of the fixture first arose on Thursday evening when a positive case among the tourists’ backroom team saw the squad confined to their hotel, with their pre-match training session and press conference both scrapped.

Those fears appeared to recede after the playing group returned a fresh round of negative PCR tests but behind the scenes ECB chief executive Tom Harrison spent a sleepless night liaising with his counterparts in India as it became apparent the drama was only just beginning.

India were already without three members of their coaching staff following an outbreak during the previous Test at the Kia Oval, with head coach Ravi Shastri testing positive alongside bowling coach Bharat Arun and fielding coach Ramakrishnan Sridhar.

The latest case, from an individual understood to have been in close contact with a large number of players, caused enough unrest to leave the tourists unable to field a side.

A Board of Control for Cricket in India (BCCI) statement read: “The BCCI and ECB held several rounds of discussion to find a way to play the Test match, however, the outbreak of Covid-19 in the Indian team contingent forced the decision.

“In lieu of the strong relationship between BCCI and ECB, the BCCI has offered to ECB a rescheduling of the cancelled Test match. Both the boards will work towards finding a window to reschedule this Test match. The BCCI has always maintained that the safety and well-being of the players is of paramount importance and there will be no comprise on that aspect.”

Harrison told Sky Sports News: “It’s a really sad day, my heart goes out to fans. The glass half-full version of this is playing a one-off Test match against India on this ground to give fans what they’ve missed out on.

“Let’s work on that and deliver it. It would be the only good news to come out of a day like this. We’ve been offered other options, but I think a few hours into this we probably need to take a look.”

The issue of insurance underpins much of what happens next. An Indian forfeit would leave them in a stronger position to claim than a mutual cancellation, adding another vitally important strand to discussions.

Asked if the ECB’s policy covered a Covid cancellation, Harrison said: “We’ve got different types of insurance and it’s a complex space. There are financial implications to this but we are taking steps to mitigate those and make sure it is as limited as it can be.

“All fans who bought tickets for this event will get their money back. As far as fans are concerned the only difference between a forfeiture and cancellation is the result.”

Lancashire chief executive Daniel Gidney offered an unreserved apology to ticket-buyers, as well as confirmation of full refunds for all, but made it clear the club was in no position to withstand the financial blowback without help.

The pandemic has had a profound effect on cash reserves and there is precious little wriggle room in the accounts.

“It’s over seven figures, multi-million pounds,” he said of the estimated losses.

“That’s something we have to manage, deal with and work through with the authorities. These are pretty unprecedented circumstances. It’s very difficult to quantify in terms of a five-day Test but we are in mitigation mode at this point. We will need to work with the ECB and others to support us through this.”