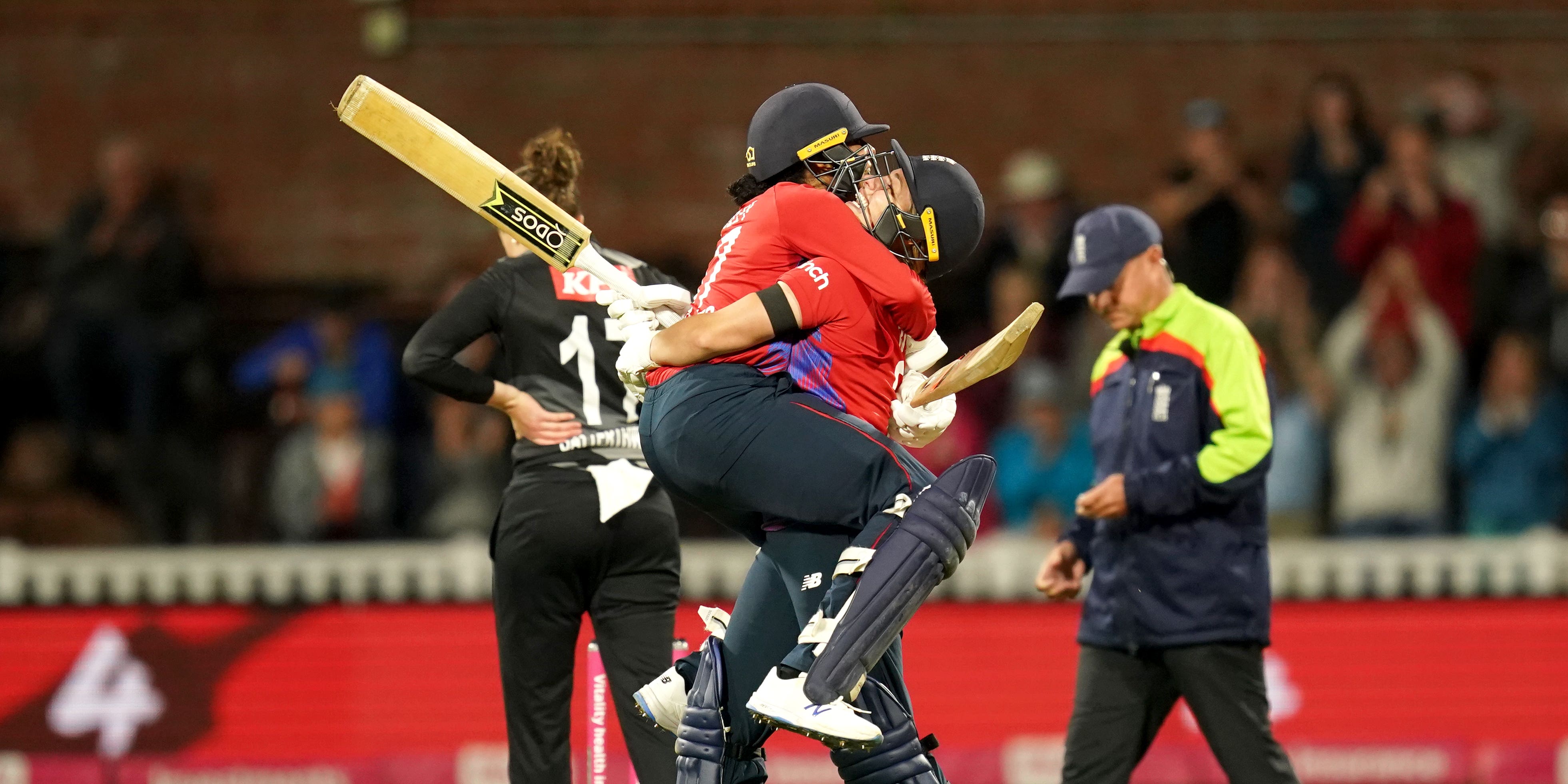 England clinched the T20 series against New Zealand in dramatic fashion after sealing victory off the penultimate ball of the third and final match at Taunton.

Sophia Dunkley struck a four with one delivery remaining to complete a four-wicket win and earn the home side a 2-1 win in their final T20 series of the summer.

Captain Heather Knight, on her return to the side from a hamstring injury, capped her 200th appearance for the national side in all formats by top-scoring with 42 as England chased down New Zealand’s 144 for four.

Both sides had started their innings slowly, but New Zealand made a number of fielding errors, allowing the ball to slip over the boundary rope on a few occasions as England edged closer to the total.

Danni Wyatt had been critical as England sought to make a good start to their run chase, finding the boundary with ease as she struck 35 from 23 balls including six fours and what would prove to be the only six of the match.

However she lost two partners cheaply, Tammy Beaumont falling for three and Nat Sciver making only two, before Wyatt herself picked out the midwicket boundary the ball after Sciver departed as England slipped to 42 for three.

Amy Jones then struck up an invaluable 55-run partnership with her returning captain to steady the England innings before she was bowled for 32 by Leigh Kasperek (three for 25).

With England needing 15 from 11, Knight found the leg-side boundary to edge her side closer, but with just eight needed to clinch the series she picked out cover as New Zealand continued to battled to the end.

England required seven off the final over, and when Maia Bouchier was bowled off the first ball and Amy Satterthwaite limited the hosts to just three runs off her first four deliveries, it looked like New Zealand might snatch the honours.

But, Dunkley managed to power Satterthwaite through midwicket for the match – and series – winning boundary.

Earlier, New Zealand opener Suzie Bates, on her 250th appearance for her country, looked to be laying the foundations for a big total as she contributed 34 to a 45-run opening stand with captain Sophie Devine.

However, that stand was broken when Bates was bowled by Tash Farrant going for an expansive drive, with the cutter knocking out leg stump.

At the halfway mark, New Zealand had wickets in hand at 61 for one, but the slow outfield was affecting the run rate.

But the visitors were able to accelerate in the second half of their innings to set England 145 to win, with Devine, who had scored a half-century as her side levelled the series in the previous T20, top-scoring again with 35.

Brooke Halliday (25 not out), Maddy Green (16) and Katey Martin (13 no) made useful contributions down the order, although it proved not enough to deny England.